Hi there, if you check out the "Season One" release, that's a collection of all existing content - you should find that's reduced to the price of the old Chapter 3 release on its own. 👍

hi, you can hit F4 while the game is running 👍

Sorry but this might require more support than I can easily give here; do you have discord? We have server:

There's a user category on there of "NALE Linux Testers"; I'm sure someone will be able to help you out.

Hi there! Yeah, the Linux version contains a version of the Windows EXE also, because Windows is our reference platform.

The file you're looking for is called "nw" (no extension) that's the executable for Linux.

Hi there; apologies but I've never seen this error before. You may want to try running the game as an administrator.

Thanks for posting this! We're aware of this problem; it's performance-related.

It affects people on certain hardware configurations. Some people might see it 1-in-100 times, others see it every time. On the whole only a relatively small number of people ever see it.

Glad you were able to get through! We're still investigating the problem; it's difficult because I never see this on my own computer, so a few people are giving me info about where it occurs for them.

Hi there; can you please contact us via discord? Link's on the game page.

We would like Nina Aquila: Legal Eagle, Season One to be part of the bundle.

Hey, where are you stuck?

Ah whoops, apologies! Will do that immediately.

Earlier this week, we brought the much-enhanced v5 version of Nina Aquila: Legal Eagle Season One back here to itch.io.

However, at the time, the demo was too large to release as a webgame, so we've spent a few days cutting it down to size, and now it's available to play:

Nina Aquila: Legal Eagle is a series of courtroom adventure games, the first of which launched here on itchio in late-2018. We continued the game episodically, adding two large additional chapters that were released as paid-for games, and this year we rolled all the existing content together into Nina Aquila: Legal Eagle, Season One, which has released on Steam for Windows/Linux/Steam Deck, and now here on Itchio. 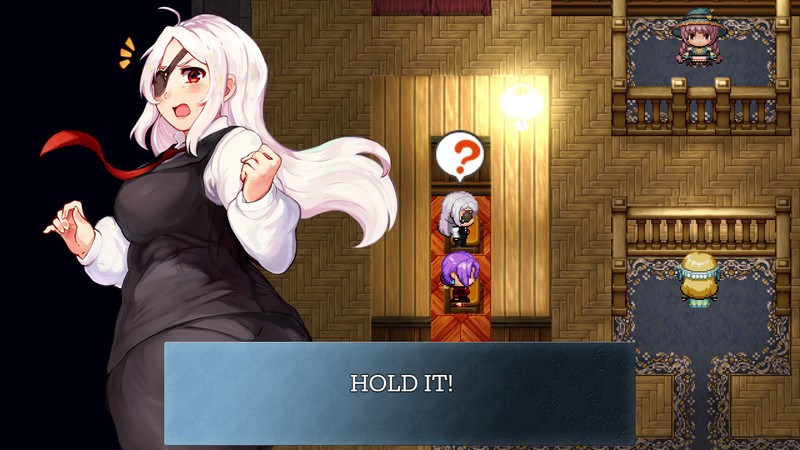 Oh wow, thanks for pointing this out! Copy-paste fail.

There are actually 2 offers; people who only own C2 get a big reduction in cost, and people who own C2&3 get a 100% reduction (as they essentially own the content already) - so we just forgot to edit the description.

Nina returns to itchio in this new release, that rolls together the older episodic content into one game!

This has numerous enhancements over the older releases, including improved art, Linux support and more.

Check it out below: 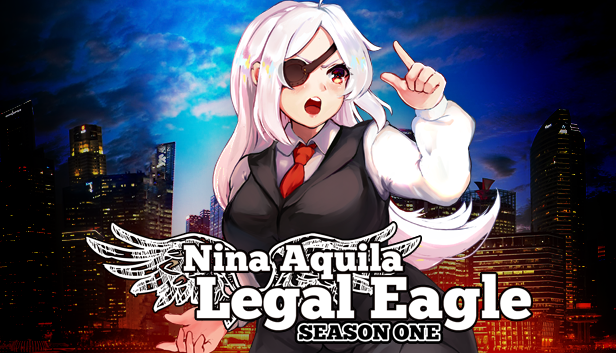 Please report any issues you encounter with the game here.

Hey, what are the full usage terms for these?

Thanks for digging that out! I'll go in the credits in our next update. I hadn't realised as it isn't in the EULA present on Steam, or stated in the store description. Still, easily fixed.

Thanks! Can you point to where it says this in the EULA? I looked through the terms and didn't see it, but I can modify my credits in my next update.

Thanks! The music came from a resource pack of royalty-free music. I'm uncertain of which specific pack at present, though.

Hey all, please reply here with any issues you observe!

Hey, do you have any intention to format these in the manner expected by the RPG Maker family? Right now, they aren't, and while the art is wonderful, it would be a lot of work to make best use of them.

That's great! It was really rare, but we did run into a few people who saw much more of it. We have to assume it's a hardware thing.

It was difficult to fix because it practically never happens on my development machine (like maybe once in ~10 playthroughs of the entire game).

During cross-examinations in court, you should be able to get to the menu using the "OPEN MENU" command.

However, much of NALE Chapter 1 is effectively one long interactive cutscene. It's only about half an hour, though, so generally people play it in one sitting.

Chapters 2 and 3 work very differently, because they have walk-around segments interspersed with the court cases.

Hey, we're really sorry to hear you're having this problem.

It took a lot of investigation, but we did actually manage to find the source of the problem, and it's related to how the game runs on certain hardware configurations.

We'd really like to make this up to you; could you contact us via email? Please message us at tanukisamastudios AT gmail.com.

Thanks for trying the first game!

Yes, Nina Aquila: Legal Eagle, Season One on Steam will comprise the three chapters that have so-far been released on itch, with the addition of new content & features, such as improved art, user interface & steam achievements.

In terms of Steam keys, we won't be providing everyone who owns the existing games free keys, but we will have opportunities to reward longtime supporters with free keys closer to release, so people can start playing on day-1. If you want to get in on that, as itch lacks any kind of messaging system, we strongly recommend joining the NALE Discord and/or following us on Twitter. We're still working out exactly how launch is going to work, so there'll be updates closer to the time.

Just for full transparency, we will be patching Chapters 1-3 on itchio some time after the Steam launch; these patches will bring over some of the QoL fixes made that improve the Steam version, but not everything; e.g. the improved art will remain a Season One exclusive, and things like Steam Achievements simply don't transfer.

In terms of whether this means you should buy the chapters now or later, that's totally up to you. From our perspective, NALE isn't crowdfunded and doesn't take donations; the game is entirely funded by sales and the merch store, so we appreciate it when fans buy the game through any channel. So if you really must see the continuation of Nina's adventures right now, the chapters are still available, or you can hold off for the definitive release later in the year.

Whatever you decide, we hope that you have a great time when you get to play through Chapters 2 and 3!

Hey, question - I've set everything up I think correctly, but haven't uploaded to Steam yet so obviously the achievements aren't working when I call them, but I think they will once I do that.

However, I noticed that you have a flag in the plugin settings called "Steamworks Debug", what does this do? Should it display a debug message when I try to unlock an achievement, even in this situation?

Oh that's terrible :( We'll see what we can do to fix it.

How would you feel about joining the discord? The URL's here: https://discord.gg/YyH5Ksa

If we could talk to you, we might be able to work out what's causing the problem.

Hey Hobcramwork; sorry to reply here like this (also sorry to the dev of this game!) but I googled you and couldn't find a better way. You mentioned a possible bug in your review this week for Nina Aquila: Legal Eagle, could you please DM us over on Twitter?

We want to know more about the problem, as we haven't seen it - but we want to fix it if possible.

Oh really? Sorry, we had a slight problem last night where we had a bug with a build. We hid the new build while we figure out what's going on, but accidentally didn't "un-hide" the older one. It should be fixed now, apologies for the delay!

Thanks a bunch! I hope you enjoy everything that follows just as much!

Thanks for the interest you've shown in NALE; we'll keep in mind your feedback and see what we can do for future chapters.

It's clear that the game wasn't to your preference but I hope you'll get more out of whatever you try next.

It'll go on the list of things to update when we do a refresh. Obviously we're limited in that by budget, but we can keep it in mind.

Admittedly no, it isn't the same person.

Thanks for the feedback; but I can assure you that the panting sound was recorded by a female voice actor.

Next time we look at refreshing assets, we'll consider revising it.

What follows is a spoiler-free walkthrough for NALE chapter 1. This tells you everything you need to do in order to fully pass through the chapter, in minimal detail so as not to spoil the fun of playing through it.

Hey vanmegs! Apologies; partially this is due to how there was a bug in one of the versions pushed to itch, and your version probably has the wrong evidence browser screen (the topic creator's screenshot shows this). It's fixed in the latest v1.1 version. This bug was introduced when we fixed something else! (Isn't that always the way). As you're about halfway through the game, you can either start over, or you can manually move your save files from the old one to the new one (they should just work), if you know how to do that. Alternatively you can keep going; just be aware these evidence puzzles are more difficult than they need to be.

However, to help you out - one of Ryoko's statements needs to be refuted; Ryoko says that no-one on the mountain cares about anything other than winning, but you can present THE HEART OF THE DRIFT to suggest that this isn't true.

Ah yeah, see my notes about version 1.1 - you unfortunately have a version of the game with a bug, where you don't have the correct evidence screen. However, as you're very near the end, you might just want to push on (just be aware that with the correct screen, the evidence gameplay is generally a bit easier).

I can't do spoiler tags here unfortunately, SPOILERS BELOW

"Rostro Pass (disused)" - the road is disused, suggesting that this could've remained undiscovered for some time.

We've just released NALE v1.1, which incorporates some fixes that were reported by the community. These include...

While neither of these were game-breaking issues (players will still be able to advance despite these problems), we've fixed both of them and uploaded a new build.

Please download this as soon as is convenient, and please delete your older version of the game.

thanks! By any chance, did you try this a second time? Did the same thing happen?

EDIT: I just double-checked it, and it seems to work okay from a scripting perspective, which suggests this might be a more complex problem - but, hopefully, one which might only affect you if you went through the events leading up to it in a very specific way.

Anyway; please let me know if you were able to progress. If it's one of those "can happen every so often" issues, that's a different scenario to if it happens all the time for you.

Hi all! Please report any issues you find here with the chapter.

RESOLVED ISSUES for v1.2 (or before):