Recycle Bros.
Recycle, or be recycled.
skrolikowski
Rhythm
Nobody Suspects Me
Nobody suspected him. Why would they? After all, he looked just like everyone else.
skrolikowski
Puzzle
Space Bum For Hire
Your friendly universe neighborhood Space Bum.
skrolikowski
Platformer
Priests vs Monsters
Another Tower Defense Game
skrolikowski
Action

Oh dang! Can’t wait. I remember playing Forward back when it first came out and I was immediately hooked.

I’ll definitely keep you on the radar. I tend to hop around on different game ideas or become really lazy 😂

Love this and will work perfect for a Conquest of the New World clone. Threw $20 at your recent bundle. Keep up the amazing work!

These would be fantastic for something like a Zelda II clone.

My pleasure. I’d be happy to play future versions and give feedback.

I played around with your game. It’s pretty hard, but I get the feeling it’s a game where you need to grind a bit before you can feel powerful. I think the mechanic you are trying to produce is solid. Lemme share some of the immediate feedback I had.

Regarding Power-ups: Are there any other than buying new weapons? Maybe a heal? Eek! I feel like i needed a lifeline or sorts.

Regarding the rooms: They are okay but maybe create a couple variations.

Also, I noticed you cannot collect coins until the room is cleared, seemed a bit odd to me as I was near death and wanted to collect a couple more coins to put towards a new gun.

Regarding the enemies: I felt they moved a bit too fast, maybe this was intentional; however I’d argue the player should feel a bit more in control. Maybe up the enemy count so the hits you take are buy obvious mistakes you made (bumping into a wall or not reloading in time) instead of constantly running away from the enemy and having to kill them quickly.

Hope this was of some value. Nice work!

I’m curious as well, I’d like to find a demo.

Wow! The highlights on your asteroids are vivid.

It’s modeled after the old Nintendo Game & Watch handhelds. The goal is to move packages across the belts. But if the package starts to fall it’s damaged goods.

Very relaxing and addictive. If I didn’t have a job I’d be playing this all day :P

Once I got the concept of all the lever I got to be pretty good at it. Some areas though my I thought my fingers were going to turn into pretzels. Good use of checkpoints too.

I noticed that if I let some invaders past me it would cause the subsequent rounds not to load.

Amazing game, love the world you have created! I can tell you put a lot of hard work into this.

I couldn’t tell if there was a point system or not. Something to collect when killing the enemies, otherwise it feels like they are just obstacles in the way.

This totally feels like a mini-arcade game found in a Sierra game, like Space Quest. Really fun.

Wonderful! I played it a full loop and then a bit more :p Love everything about this!

I definitely dig the graphics, music, and setup. The game reminded me of the Rebuild series. I was obliterated on my first attempt :p 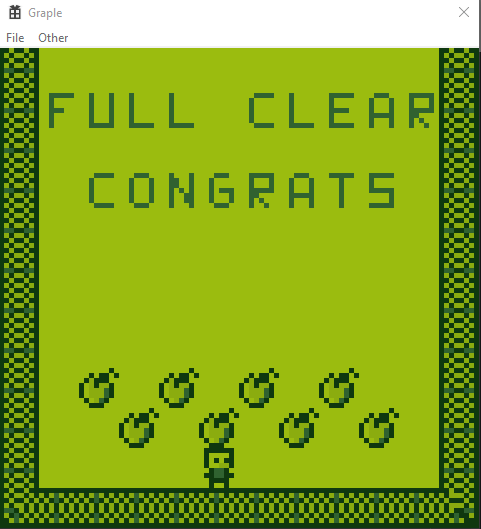 Hurray!! Unlimited apples for me!! :D

Thanks for the comment! Yes, it is modeled after the old Game & Watch games. If you have a sec, please check out my devlog, which explains more.

The issue has since been patched.

Indeed I did! Patched version is now available.

Thanks for the feedback. Trying to track down the bug.

So items must be carried over to their adjacent conveyor belt. If they are in the act of falling they will continue to fall through the robots.

I was referring to while on the ground.

Thanks for the feedback, and also for checking out the game!

I won’t mention the small screen, cause it already has been.

Some aspects of gameplay were good, moving with the keyboard and aiming/shooting with the mouse felt good.

However, some aspects felt a bit frustrating.

Very nicely done! Interesting idea of using a weapon to reach platforms out of reach. If there was one enhancement I’d suggest it would be allowing for short side to side movements, but I assume that’s part of the challenge.

Nice looking graphics, however the game moves a bit to fast for me (i.e. movement, messages). Found it difficult to control the player and catch the messages that came up on the screen.

I got all the items (bag, heart, and candy cane) but couldn’t figure out how to proceed. I assumed it had something to do with the plates with a red button at the top.

Nice! I do love me some breakout. Do you plan on adding power-ups eventually?

Thanks for the review! Glad you liked it, and wow! 93 is a really high score!

I’ll try to reproduce the issue you came across and see if I can get a fix.

Yes! Love the idea. I was notified a bit late to press Q to switch between both screens. Really fun!

Interesting twist on a top-down shoot ’em up. It has a retro fill where the enemies all move in unison. Really enjoyed the layout as well.

Thanks for your recycling contributions :p

Very cool work! Love it! Looks like you got a ninja turtle even!

Great read! I really enjoyed hearing about your trials of coming up with a visually pleasing, satisfying chess game.

I definitely can relate with my own projects steering in several directions as I prototype and scope the project out. In the end I always tend to have something completely different than my initial idea :p

As always, love the style of your artwork. Such an extensive collection!

Good point :P You could always open it in a paint tool to swap colors and presto! A ninja is born.