Took me a minute to figure out that the spacebar was to fire. I like the special attack

the physics are satisfying. i like how the square moves when it "walks" up stairs. i would prefer if the retry button showed up faster when you die so that you don't have to wait a second before you respawn.

i didn't realize how little i actually remembered the colors of these flags until i played this game. i like it

i like the characters and the animations, quite cute and creepy

I learned something about Godot today. I decided to make sure that our project could export correctly so that we would be ready to submit it for the jam. I found that, when the project was exported without debugging, it failed in several places, even though it had no problems running either in the editor or when exported without debugging. Frustratingly, the non-debug version didn't even seem to report error messages; I enabled logging, but my assert statements had no effect.

I had apparently not read the very last sentence in the GDScript basics:

Now that I have overcome this, I think that almost everything in the game should run well in a browser, so you will be able to play it on this website.

On another note, here is a level I designed. You can see the two variants of the Guard, some new tiles, and the updated HUD. I think we can still make the HUD look better, but I'm not yet sure how. The time in the lower right is an optional speedrun timer. 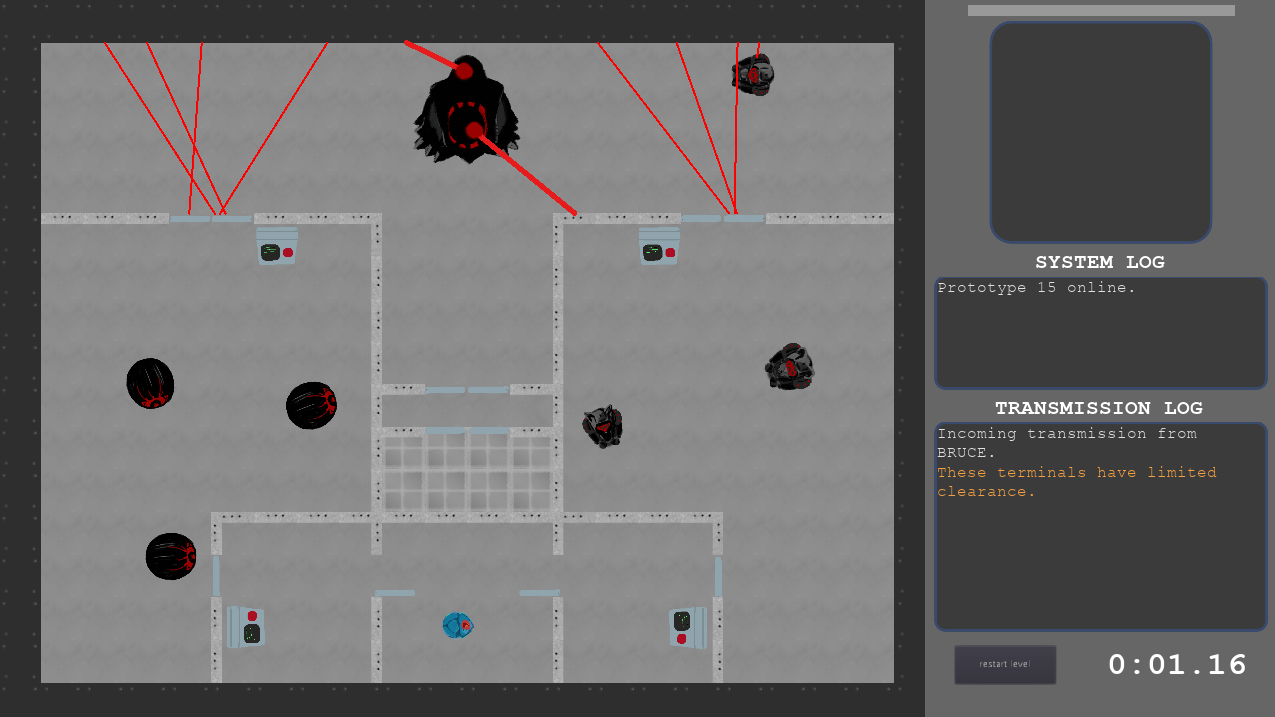 These two guards are friends:

This looks interesting! These immortal celestial beings are pretty. I wonder what emotions they will discover.
What engine are you using to make this?

Lasers were previously just lines to walk across, but now we have a laser beam that raycasts to vary its length. We also made two visual variations of the human guard to emphasize their individuality.

Here is the new Sentinel, which emits the new lasers:

The Doombas are less observant, so any disguise fools them.

There is a new obstacle, the motion-sensitive laser beam. Fortunately, Ides is a clever and nimble robot who can carefully walk over the beams. However, if Ides is disguised while walking over a laser beam, its hologram will trigger the laser.

We have created some new entities: the Human Guard and the Potted Plant. The security roomba has also been renamed to the Doomba because the sprite that inhumanrobot made for it is scary. Ides also has a new look.

Ides can now scan entities and receive dialog from BRUCE. Sometimes it takes me a while to figure out how I want to organize functionality in nodes, but once I do, I feel like it makes sense, and is pretty easy to scale.

We also have a HUD, like the one in my concept art. 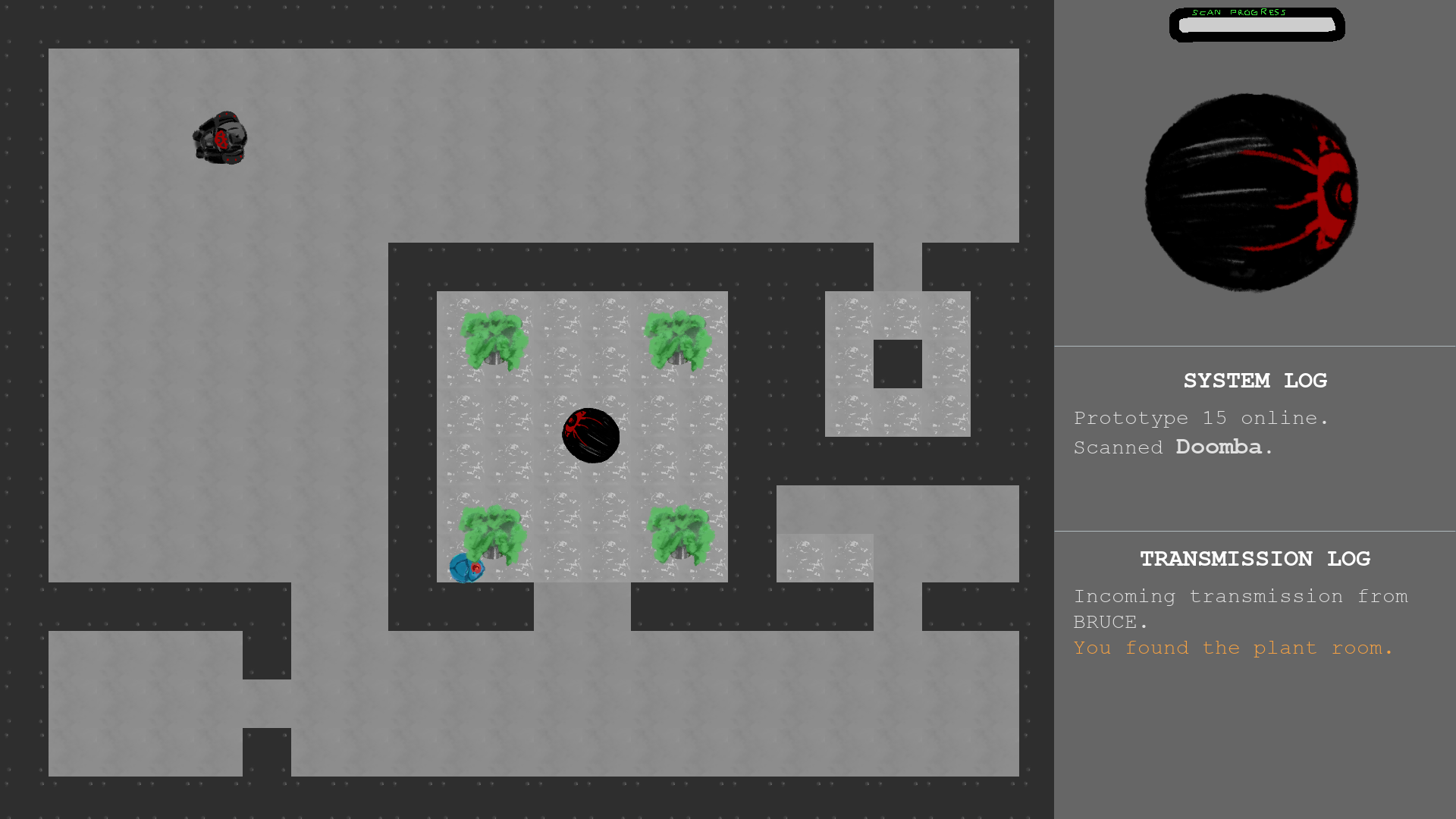 Introducing our first enemy, the security roomba, with my programmer art:

I'm starting to get the hang of Godot. I have experience with Python, so the GDScript syntax is familiar to me. I also like the node-based design principles. The tileset editor seems kind of hard to use, though.

I think we will use a vertical top-down perspective because it makes it easy to rotate entities like the security roomba, which is important because the player needs to know which direction the enemies are facing.

I'm collaborating with inhumanrobot to make a top-down stealth game. You play as Ides, a prototype robot with the ability to scan entities and project holograms of them to disguise yourself. You were awoken by the artificial intelligence BRUCE to sneak around and steal a certain important orb.

These are the goals that I would like to accomplish:

We are planning to use Godot, which neither of us have used before.

This is roughly how I imagine the layout to be: 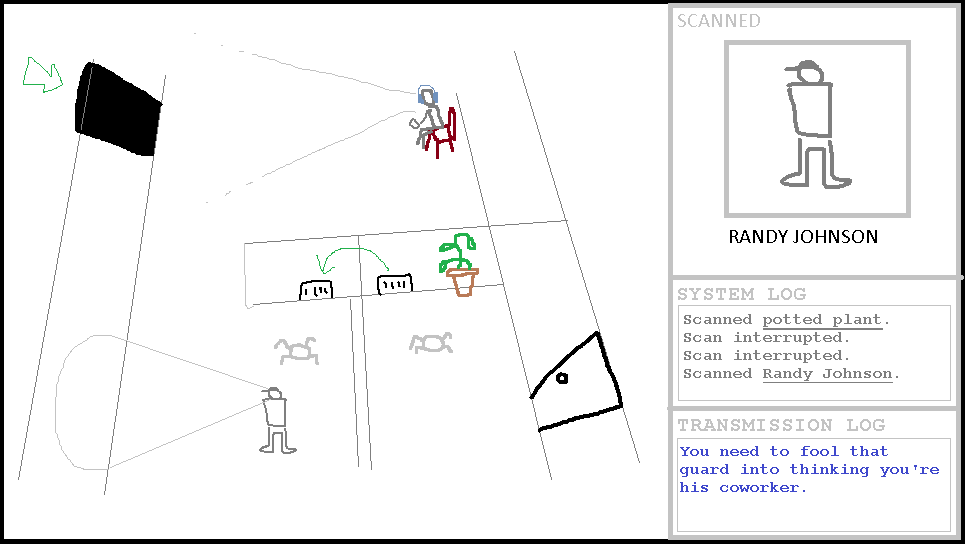