FlowScape community · Posted in RoadMap for the Future?
richardandtracy277 days ago

I fear I'm not going to make you any happier. I reported on the impression I received from the site on each of the repeated occasions I have tried to find something there. I feel wildly uncomfortable visiting, and really dislike doing so. I would be very happy not to need to do so again.

It could very well be that I am a fully qualified 'old fart', but it takes all sorts to make a world. I don't ask for everyone (or maybe anyone) to agree with me, and can see how some people really enjoy the site; if nothing else, the activity level indicates that there are many who do. I cannot pretend to be one. Equally, I don't ask those members to enjoy everything I do. I do not ask anyone to change their opinions of me because I don't like it. A good range of opinions is needed for diversity in the world.

Reply
FlowScape community · Posted in RoadMap for the Future?
richardandtracy283 days ago

If there was anything of any consequence shouted into the screaming chaos of the discord at that date, I can't find it.  There is nothing at that date under 'rules-and -info', 'reddit-feed', 'announcements', 'challenge-announcements', 'flowscape', 'off-topic', 'q-and-a', 'reviews-n-videos', 'welcome', 'suggestions', 'bug-reports' and 'gallery'. At that point I was sick & tired of the toddlers screaming for attention and turned it off. There is a limit to how much chaos I can be bothered to put up with. Can I ask,  where did all the capital letters & punctuation run off to hide, I wonder?

So, PixelForest, as it's far from easy to find your plans in Discord, is it possible to repeat them in the calm of this environment? Rather than us having to brave the tiresome screaming for attention of the discord madhouse?

Reply
FlowScape community · Replied to papajo in Having trouble getting it going? Look in here
richardandtracy303 days ago

There is a link in this thread

Still thoroughly enjoying FS. Glad all is OK with you Pixelforest, hope your home is undamaged. Looking forward to updates, but they are not necessary to keep enjoying FS. The biggest limitation is, as usual, a paucity of my own imagination.

It is a shame. I can understand the reasons for no export, but is disappointing, because FlowScape is such a fantastically easy tool to use to get superb landscapes from. It totally knocks the socks off every other 'proper' 3D modeller I have seen for this task. They are not a patch on FlowScape, and if FlowScape were ever to get export capability, the more traditional modellers would be totally overwhelmed by the competition from FlowScape in this relatively limited (but important, and often overlooked)  area of landscape generation. It is possible to do in 5 minutes with FlowScape what it takes 5 hours or more in 'proper' modellers (assuming, of course, that they have the libraries to play with in the first place). The very randomness of the heights, angles, density etc of painting trees & things makes it so much more realistic than plonking a single model at a time in a defined place. Brilliant idea, superbly extended to the other plants & animals. Using physics to drop rocks & branches so they drop in realistically random positions - I have never seen that implemented elsewhere. Genius idea, and almost impossible to replicate in traditional modellers.

Have to confess I cannot really regard FlowScape as a 'toy' or a 'game' , it's just too good at what it does to be dismissed like that. The interface is usable by people unfamiliar with 'proper' modellers, but it comes with so many novel ideas for creating the landscape that traditional modeller's interfaces look archaic & way behind the curve. Being able to export would enable its productivity boost to be enjoyed in other programs.

I didn't start this comment intending to write a paean to FlowScape, but that's what it seems to have turned into.

Reply
FlowScape community · Posted in How to insert a lion standing on its paws?
richardandtracy1 year ago (1 edit)

If the models are fully articulated in FS, only a very limited range of animation movements is available - limited to the animation loop in the resource model FS uses. For a fully articulated model you can pose etc you need a different package. One that is free, but much content has to be paid for, is DAZ Studio ( https://www.daz3d.com/ ). Big cats are in the list of non-human creatures that can be posed and animated with it. Unfortunately the only import method for FS appears to be as a static mesh object, so the figure (whether Human, Cat, Big Cat or anything else) has no animation in FS.

If I start FS in a window smaller than the full screen, then maximize it, the cursor is limited to the old window and cannot go outside it unless I use Alt-Tab to switch windows. Then when I move back into FS I can click on the UI outside the old window size. However if I move back within the boundaries of the the old window pane, I cannot move outside that area again without an Alt-Tab. OS: Win 7, FS 1.5.1 (not updated to 1.5.2 yet). It's an irritation more than a major issue & there is a work-around.

Rivers & streams don't always freeze over the instant it snows. Here in the UK it's rare to have rivers & the sea freeze over - once in a lifetime or even less frequently.

One thing not mentioned is if you have imported any mesh OBJ files (and probably sky HDR files, though I cannot confirm this as I've not tried to share skies). These are not saved in the save**.json file, just references to them, so you will also need to distribute the .obj file, texture files (.jpg or .png etc) and .mtl files with the FlowScape file too. The directory tree to the OBJ files needs to be duplicated too, otherwise FlowScape won't be able to import the mesh object.

Plants growing from imported objects can lead to interesting effects, such as this image I did: 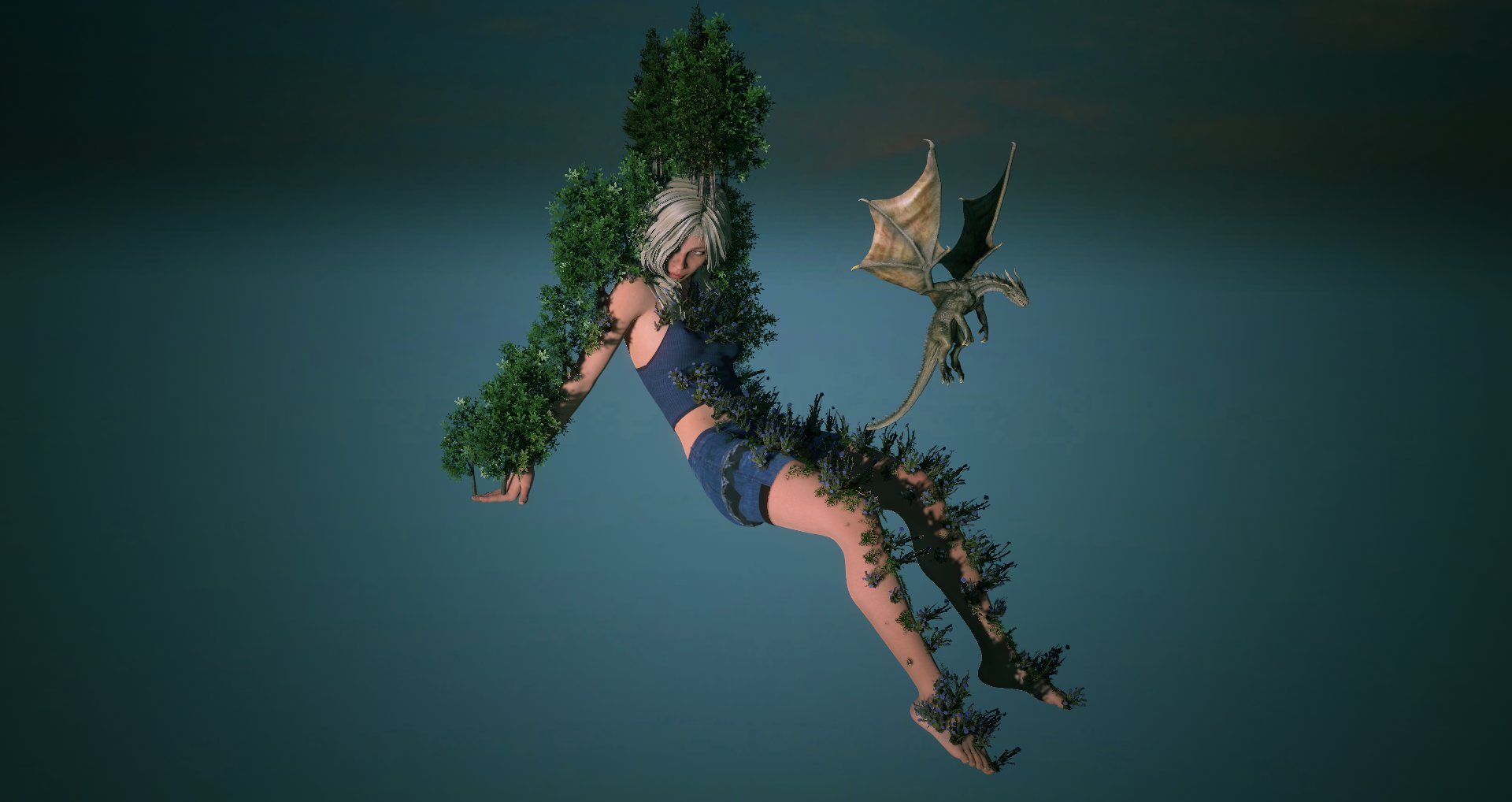 As it's interesting, it would be nice if this feature were not broken.

Does snow still coat river/sea beds like it does in v1.5.1? Bit strange that when you first see it.

Just had an idea how these could be implemented on the UI. Have up to 5 camera dots somewhere, possibly under the FOV slider. Black when empty, green when set. Left click to set with current camera, Right click to move the camera to that position. Shift Left click to clear. Camera dot records all camera related settings, including FOV, depth of focus, angle, altitude and location.

Reply
FlowScape community · Posted in update suggestions, mine and anyone else's
richardandtracy1 year ago

It occurred to me that being able to save more than one camera position would be useful.

And having the current saved camera position reliably returning in the next session would be just as useful. I have a moderately complex scene with a number of viewpoints designed in, and a couple of obj import figures placed. Saved the camera using 'page up', and next session it returned to a position near to where it should have been, but not exactly the same position, height or angle. (Version 1.4 on Windows 7).

I was impressed. Imported the 11.2 million facet model, and while it slowed the machine down, it was not a jerky as I had feared. The model represented 3 man-years of design work and crippled the same machine when in SolidWorks (15 minutes to change view degree of crippling). Now I only have to work out how to texture map such a model & I could do some publicity shots for it as opposed to our usual CAD drawings. That'll surprise the boss..

Tried with triangles and quads. The only thing relating to the shadow that affects it is the normal. If a reverse side of the facet faces the light, it throws no shadow. I suspect that with the model of the yacht is such that it's either single sided or there is something peculiar about the normals on the inner surface.

I wonder, then, if it's the fact the facets are triangular. The shadow I get from a DAZ Studio figure and clothing looks right to me. The poly count is 100,000+, but most are quads. I'll try with a small converted STL later today to test. I have an 11.2 million triangle/660Mb model I could try testing with after that - will be fun , but I have no expectations of it working, and had none for DS, and was pleasantly surprised when it did work.

While using V1.4 I've not had that problem - see the last post on this page