Hey, if you need music or sound for your adventure game, I'd be happy to help! Here's a link to some of my work. I can also help with pixel art and programming (Unity/C#) if needed!

I was working on some new new areas for my game in Gimp and came across an interesting way to create some depressions into ground surfaces. This can easily be turned into fissures or bodies of water.

Basically, you start with some kind of texture that you copy to the clipboard and use that as your brush. Then you set the 'Brush Mode' to 'Subtract' and start drawing in some shapes. Next, you can fill in the the black space with a dirt color. If you want some water after that, just add another layer with a semi-transparent alpha and you end up with a pond/lake. The texture from the brush adds some noise around the outline so you don't have to spend as much time going back to make a transition between the two layers.

Not sure how many of y'all use Gimp, but I imagine this would work very similarly in Photoshop. I hope other gamedevs/pixelartists find some use with this!

Hey, everyone! Resonant Blade is my solo indie game that's been in development for 2+ years. Lots of progress and learning, but still a long ways to go. Resonant Blade is a 2d sci-fi action-adventure game inspired by games like Hyper Light Drifter and classic Zelda games. Although I've been posting more regularly on GameJolt, Twitter, and Youtube, I figured I might as well share the game here, too!

Welcome to Episode 23 of the Resonant Blade Devlog series! In this episode, I’ll be showing you all the new boss I’ve been working on, The Colossus.

You’ll run into this boss in the first dungeon, the Underwater Research Lab in Locria City. I took the design from the giant submerged robot from the Locria City scene and used that as a template for this boss adding in some hands and side turrets that descend from the ceiling. The design of the Boss Room reuses some elements from the underwater tunnel I showed in a previous devlog. It’s still kind of bare and there are some more details to add with the water layers and ceiling. At one point, I was trying to add more space for the player to move around on in the room, but this just didn’t fit in with the Colossus’s design and started to make things unnecessarily complicated.

I tried to sketch out and design as much of the Colossus’s mechanics before actually implementing any of them. This helped me stay on track and kept things in a manageable state. I also started using a new built-in method for timing events that I wish I had been using since I started working on Resonant Blade. When I was first looking into Unity Coding tutorials, I think the first few I studied used timers that occur in the Update method. Since that seemed to work, I’ve been using those ever since. However, the IEnumerator method makes some things much easier and quicker to implement and test and there ends up being way less timer variables to keep track of.

The Colossus has two main attacks, the Pulse Cannon and the Hand Lasers. For the Pulse Cannon, the Colossus opens up its mouth revealing the cannon and fires multiple shots in a wide arc towards the player. This attack was somewhat easy to implement. Create art assets, instantiate prefabs, update the position at different velocities, and make them hurt the player.

The Hand Lasers were much tougher to design because I had to figure out how to use the Line Renderer component in Unity. After sorting that out, it was just a matter of updating the end point position of the line and adding some sprites and collision at the contact point. There’s also a third attack that I made when I added those side platforms to the room, but that one didn’t make it into the final design.

The Colossus has three stages that ramp up the difficulty at each new stage. The first stage eases the player into the fight. The Colossus will cycle through its Pulse Cannon and Hand Laser attacks before randomizing the resonant frequencies of its hands. Throughout this boss fight, the player will have to stun the Colossus by taking out its two hands or throwing a sonic grenade in its mouth.

After one of these two conditions are met, the hands will activate a powerup in the center of the room.The player will be granted a temporary Resonant frequency that they can use to damage the Colossus’s head. I’m planning on reusing the resonant frequency powerup throughout the dungeon leading up the boss. I think this will help tie the dungeon and boss together and should help clue in the player to what they’ll need to be doing in the boss fight. After doing enough damage to the head, the Colossus will move on to the second stage.

Things start moving faster in the next two stages with a more annoying Pulse Cannon combined with two side turrets that come down from the ceiling. Also, in the second and third stages I added some cracks in the Colossus’s armor and some smoke and shock effects to show the boss becoming more and more damaged. In the final stage, the Colossus closes its hands to hide its Resonant Frequency from being seen. I still need to add this in, but the player will still be able to hear the Resonant Frequency to find out the hands’ weaknesses in this stage. I was also thinking about making the boss shut its mouth when the player throws a grenade at it. This would force the player to have to take out the hands instead.

I added in a short death cutscene after you deliver the final blow to the Colossus. I could make this death animation fancier with some shader effects, but I think it’s good enough for now. Afterwards, the new Resonant Crystal floats down and Atlas absorbs it into the Resonant Blade.

Alright, that’s it for this episode. There’s so many ways to make this boss way more difficult, but I wanted to try and keep things as simple and straightforward as possible. After creating the Colossus, I now have a much greater sense of respect and appreciation for other video game bosses. Thanks for watching/reading everyone and I’ll see you next time! 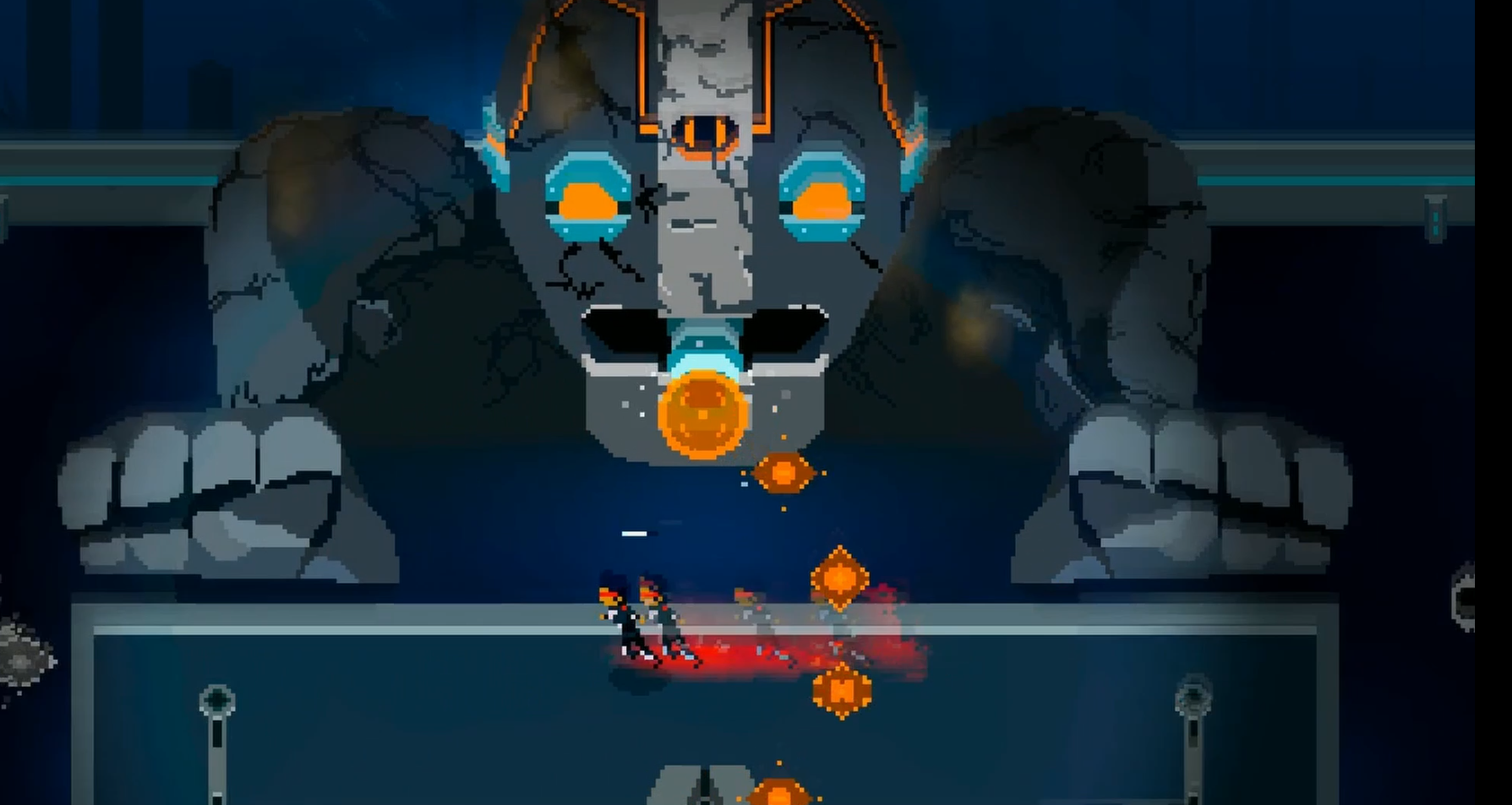 Great game so far! The atmosphere and unique art style is really something. I played with Mouse + Keyboard. Overall, the controls were good, but the camera rotation was too slow and I didn't like the camera rotate being mapped to 'Q' and 'E'. It made it difficult to move/strafe while rotating the cam at the same time. Maybe just have the mouse handle the rotation instead?

I think a few other people pointed this out, but the boss sfx were too loud and clipping most of the time. It was a little jarring compared to the other sound effects. The rock collision boxes seemed a little too large or I'm just bad at dodging them.

I liked the mood that the music gave off, but there were too many tracks and the instrumentation wasn't that cohesive. You said that you were using royalty-free music at the moment, so that kind of makes sense. I really think having dynamic music layers fading in and out at different moments would really be cool! Are you still looking for a composer? I'm not sure if this is the right place to put this, but I did a couple of mock-up tracks with some video a few days ago and just wanted to share  I really liked the organ in the boss music and kept that as part of the instrumentation :)

Awesome game, overall! Congrats, Tim! I only made it halfway through the 2nd chapter so far. It gets difficult pretty fast (in a good way). I like the introduction of new abilities and the feel of the jump + tiny screen shake. It would be cool to see some speed runs of this eventually.

Resonant Blade, a 2D Action RPG, is my first kind of larger-scoped game that I'm creating. It's still in the very early stages of development. So far, I've created some of the basics like a main character sprite, some animations and movement controls, basic sword swing combat mechanics, a simple UI, and some enemies.  The main mechanic that I'm working on is the combat. I want to somehow tie in game audio to the combat so that the player will become reliant on using sound to help defeat enemies. Enemies will have certain resonant frequencies tied to them. If the player changes the Resonant Blade to the matching enemy resonant frequency, they will be able to damage the enemy. Think of the Borg from Star Trek with their shields and how the Enterprise crew have to shift their phaser frequencies to get through the Borg's shields. It's kind of like that but with a sword.

Here's a preview of what I've done so far. r

Awesome, thanks for checking it out!

Some impressive level design for such a short time. Nicely done!

Great game! The controls are my biggest complaint. The mouse and movement controls are both a bit laggy and delayed feeling. The leaderboard feature works amazingly well with this game. I find myself getting frustrated for getting knocked in the hole, but I want to keep trying to see how I did against the competition. Was skipping the bridges via cannonball force intended?

Very cool! This game has good potential for expansion. The second level seemed like the most challenging. It probably would have been good to move that to the last level so that there is more of a progression in the difficulty. Overall, I enjoyed the concept and gameplay!

Good job for your first game! It took me a few tries to get enough money to build a tower, but once I did it got considerably easier even with the awkward aiming. It would be nice if the player could access a tower by the end of the first wave. I think it's possible if it's a perfect score, not sure. But maybe just start the player with 100 money. That way they have faster access to a key feature of what makes a tower defense game a tower defense game especially because this is a shorter game with three waves. Another weird bug is that I noticed that the player's projectile would sometimes get destroyed on the first ball it collides with and other times it would travel through a bunch of them.

Thanks for the feedback! If you walk back away from the cubes far enough, the cubes will reset to their original positions. Yea, after getting people to play this, I'm starting to realize I may have made this too difficult and did not have enough explanation.

Hit "z". Follow the signs to help you. Good luck!

Thanks for playing and leaving feedback. To get to the end, be sure to have your sound on. The music will guide you...

A short clip showing the main character, Lucy, traveling through a mysterious Psygate.