Thanks for the heads up, I couldn't reproduce it but added a work around: I added a button to return to the starting area
(new version is the PlanetOfHurtStandalone.zip)
let me know if it gives you more trouble!

Nice vid!
I was not sure how to call that gun, it was going to be called the "Waymaker" originally but it sounded kinda lame so i just didn't name the guns in the end (less work)
calling it the truman gun sounds way funnier also .. and i actually picked a quote based on that .. but i guess it's weird out of context
.. dunno lemme know if you want a different one instead
sorry about the weapon resetting thing - this game is just like doom in many ways after all - but i think i fixed it in V3

you see this is a Wolf3D clone (or more like a Blakestone clone)
and these games didn't have shotguns.. that is the main reason for its absence
(the sort-of-sequel will have one but its nowhere close to be released)

anyway glad you enjoyed it!

You know, i just remembered: i actually made a tileable version of the rock texture
Uploaded it just now: https://opengameart.org/content/lab2-alpha-textures-tile006png
(and also some others, maybe you can get some use from it)

Nice game! (i somehow got through level 6 and won apparently .. ok i played on easy)

Nice!
I'm not sure I should.. after all it's  tradition in FPS to run faster diagonally (or at least it used to be)

Glad you enjoyed it!
I already did: there is the downloadable projector version and also the remake

Glad you enjoyed it!
You can play with locked Y:  just turn off mouse aim in the options (under mouse)
(by default you fire with Z in this mode, you can also change that under keys)

it's a custom engine (c++ and opengl)

Thank you for the review! (and i'm glad you enjoyed it!)
I'll get my sound act together I promise!

Hmm.. at least it's somewhat solved then
(main cause i suspect is not technical but caused by that i tend to choose
quiet sounds because i'm bothered by loud gun sounds)

Thank you for trying it out btw!

Thank you for your help!
I added  a new version: v3.05
(it's somewhat experimental though)

Can you tell me some info about your system specs? Like what sort of soundcard (or mainboard) you got, what OS etc?

Do you have them both at 100% volume in options?
if so can you check if you have the same problem in https://mutantleg.itch.io/nekkrobox ?
(unless you don't feel like it)

i'm glad you like it!
i made many games since lab, but none of them got this much attention (i wonder why this one got any)
if you like fps games you might be interested in my latest one: https://mutantleg.itch.io/nekkrobox

Hello, thank you for catching this bug!

I somehow figured it out and it's almost amusing:
turns out it was because the filetype was uppercase
(so .ZIP gives this error but .zip is fine)
(and strangely enough it worked well on the old Itch App,
i guess they broke something with some update? oh well)

And here i thought you lost confidence or something (i seen many youtubers do lately)
anyway i'm glad you're getting better!

It's still at early stages (pre-alpha at best) so a little teaser is all i can do for now: 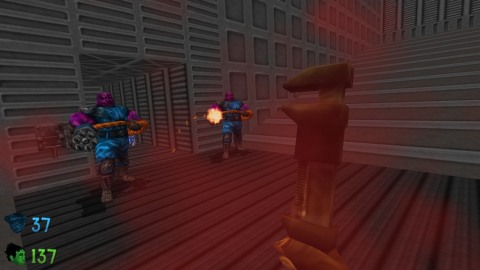 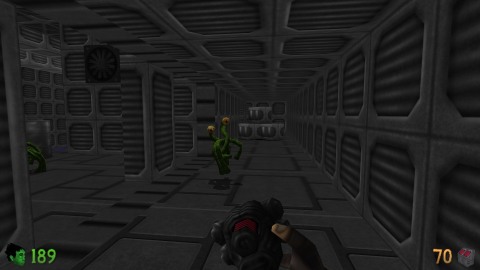 Hey, im doin ok, how about you? (You seemed to dropped talking in your recent videos whats up with that?)
Sure, a pretty big project actually, so naturally it's taking forever to finish

It's a self made one, pretty much just raw C++ with OpenGL

You need to grab the green key from behind the large structure,
then find the red key inside, the exit is behind the red door ..  err
just check out wobbly's walkthru of the area:

that improves most games i find (also i like to listen to it while playing mario world myself)
(btw any luck getting past in this version?)

oh .. well uh .. i don't have an exact tactic for taking them out

here is a cheat though: in the map select you can hold down M U T to unlock all maps (and  then just skip map 3)

sorry to hear that, so how you got stuck? or found a bug?

Man that's ironic, a whole lot of polish went into it (you should have seen the old versions)
but alas  shipping is cutting

Haha thats ok :)
Funnily enough that is the same order they have been made

I even reused the same explosion sprite

Nice! .. but did you found the super secret as well? (also on the first map)

What went well?
Compared to my previous 3D jam game : everything
so in the previous game the level looked horrible,
there was only one puzzle (which i thought was easy but people had a hard time figuring out)
and on top of it all due to a bug there was no sound at all
(but on my machine as I used absolute paths for testing) 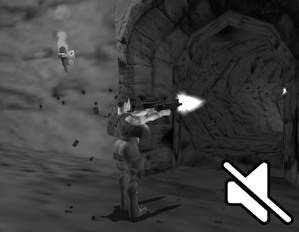 But this time the colors and map turned out nicely,
people figured out the puzzles pretty fast
the idea of chutulu (sic) prank calls you was well received
and the sounds.. well.. worked

i found too late about that public domain is not  the same as it once was
the music in question is  "You Know What I Mean" by Al Bernard
which seemed perfect,  it was from the time period,
i liked it a lot, and most importantly it had nothing to do with lovecraft
and i also double checked that it was in the public domain 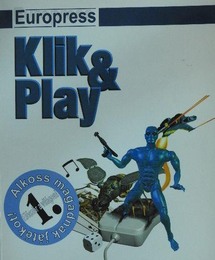 many people pointed out that the water splash sound is from minecraft
but i remembered using the one from Klik & Play
and turns out it was a third one .. that i'm not sure where i got from
oh well,   i guess all splash sounds are alike

there was a bug somehow nobody noticed:
i forgot to set a title of the map
so on the loading menu it just says "title"

and finally, some of the prank calls got a bit obscure
here are some explanations:

This one is pretty self explanatory:
"Is Mr Wall there?"
"No"
"Then may I ask what's holding up your house? "

Prince Albert was some sort of tobacco you could buy
apparently it came in a can
of course for my generation  Prince Albert  was a slang for ..
uhh.. something .. else..
making this call even weirder:

she is in Innsmouth

i leave you with this

"You are a tough as nails detective in the 1920s out to find clues or leads on a
mystery of sort but alas end up in a castle full of purple horrors who bite, spit on you,
call you names,  demonetize your videos .. the very worst things one can imagine
and on top of that  Chutulu keeps prank calling you .."

Made for the Bad Lovecraft Games Jam

I couldn't help myself and made a patch with some minor fixes: 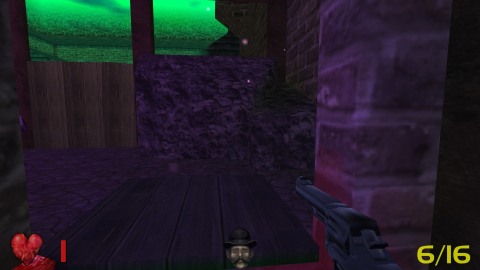 added an extra rock here to make jumping up easier 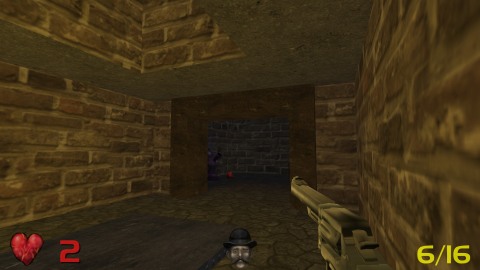 fixed the z-fighting in this room 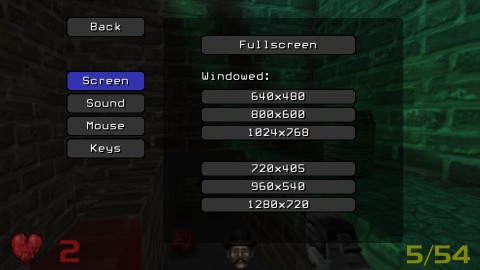 made clear (hopefully) that the resolutions are for windowed mode 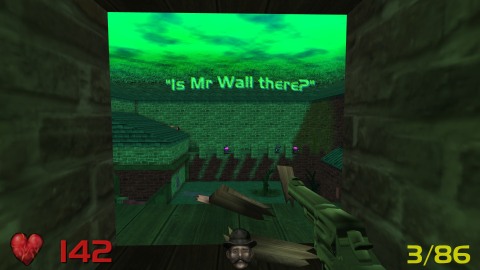 I'm finally done with the most difficult part so far: the trailer
(codecs are the true horror of our time)

(alas I had an unfair advantage: I've been making bad games longer than I can remember)