So cool, thank you!

Thank you for your nice words! Appreciate the feedback. I understand the frustration but actually, while not intended as a lesson per se, the randomness and even backfiring is part of the concept, as is the bleakness. But it goes both ways: Some Life cards will "backfire" as well, in that they may increase Esteem. Thanks for giving it a try and 42 days is pretty good!

This makes a lot of sense in terms of game mechanics actually. Keeping stress low and health as well as family high will ultimately result in low or lower esteem, so your balance checks out. In the case of Tiago R2, I'm guessing they may have started with high esteem, then resorted to your approach. Their esteem couldn't increase, but neither did it decline much either.

Thank you! Will check out yours!

Interesting take! I like this. Thank you for your kind words! 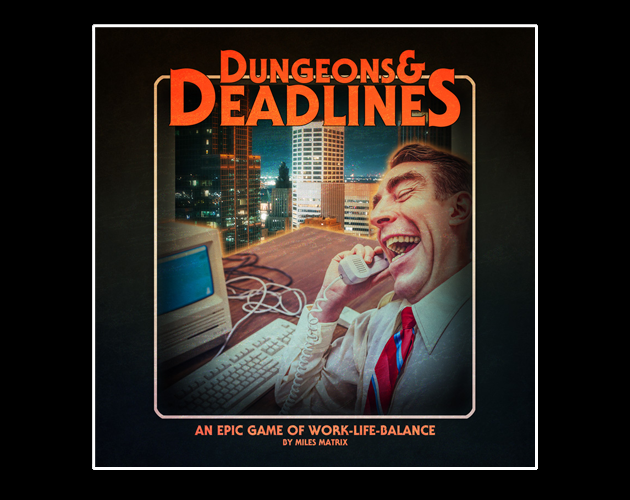 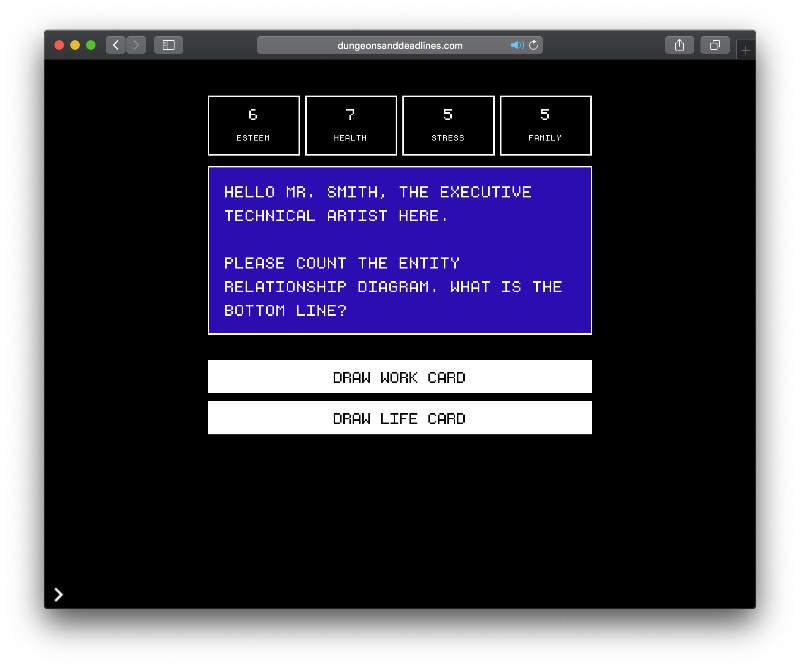 Imagine a world where you sell your labour power for less than the value produced by your labour, and your company profits from this surplus value. Welcome to Dungeons & Deadlines, a card game where you have to balance work and life, success and sanity, career and family to survive the probation period. How long will you last? Will you burn out or fade away?

Created by Synthwave artist Miles Matrix during an extreme bout of depression as a means to a voice, Dungeons & Deadlines is a satirical look at daily work place horror and the meaningless emptiness of capitalism played out via cards. The aim of the game is to survive the probation period of 62 days – but at what cost?

You can play it straight in your browser here on itch.io:

You are twelve-year old Lily. While playing at dusk, your little brother runs into Arkwright House, an old abandoned orphanage.

You have heard the stories...

Find your brother and bring him back home. But beware: If you get too scared, you may go insane and get trapped in Arkwright House forever...

You can play it here on https://miles-matrix.itch.io/arkwrighthouse 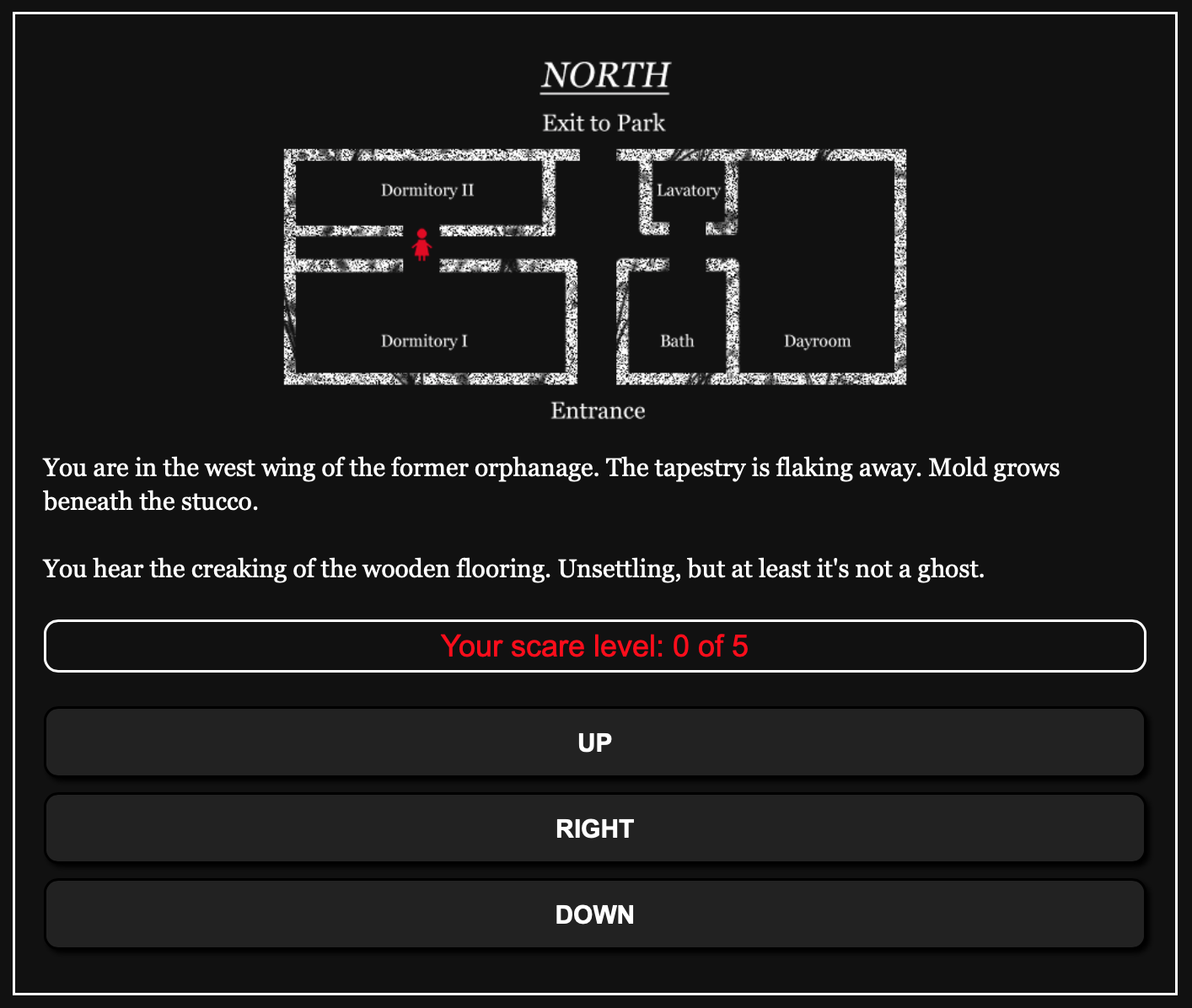 Hey, I'm using your font on an upcoming project and would like to credit you properly - do you have sth specific in mind?

American Angst is out now on Google Play for Android Smartphones!

Imagine a horror novel where you get to make the choices and decide how the story plays out: Welcome to American Angst, a text-based multiple-choice survival horror interactive fiction, combining RPG elements and turn-based combat with dark humor and satire.

Get for free on Google Play

Thank you for playing and sharing your thoughts :)

Out now for free for MacOS and Win +++ Created with Twine +++

Imagine a horror novel where you get to make the choices and decide how the story plays out: Welcome to American Angst, a text-based multiple-choice survival horror interactive fiction, combining RPG elements and turn-based combat with dark humor and satire.

A choice-based game slash novel, you try to escape from an underground prison complex – all the while suffering from amnesia, fighting off guards seeking your death, and slowly unravelling the mystery that brought you to this place, as you traverse the thin line between survival and revenge… 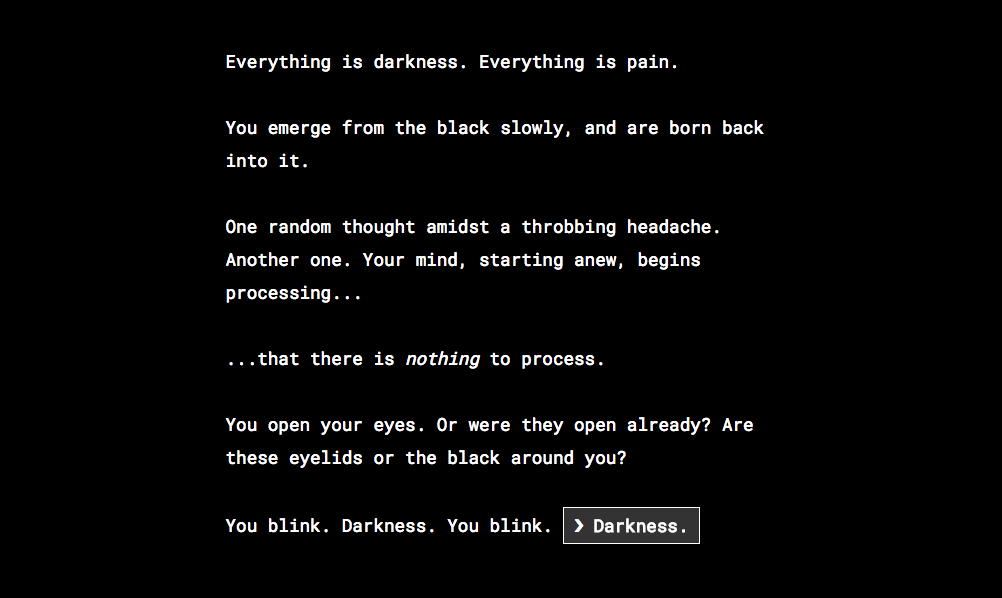 Oh no! You lost your shit! But Dr. Cuthbert needs all five samples. Do you remember in which 🚽 you left them? Find your poop and earn Shitcoins!

CAN YOU ACHIEVE THE IMPROBABLE HIGHSCORE OF 5?

Get your shit together, before Evil Mr. Flush claims it forever. Will you be able to get all five poop samples to Dr. Cuthbert in time and earn the impossible highscore of 5 Shitcoins?

Play the game for free: https://m3g1dd0.itch.io/wheresmypoop 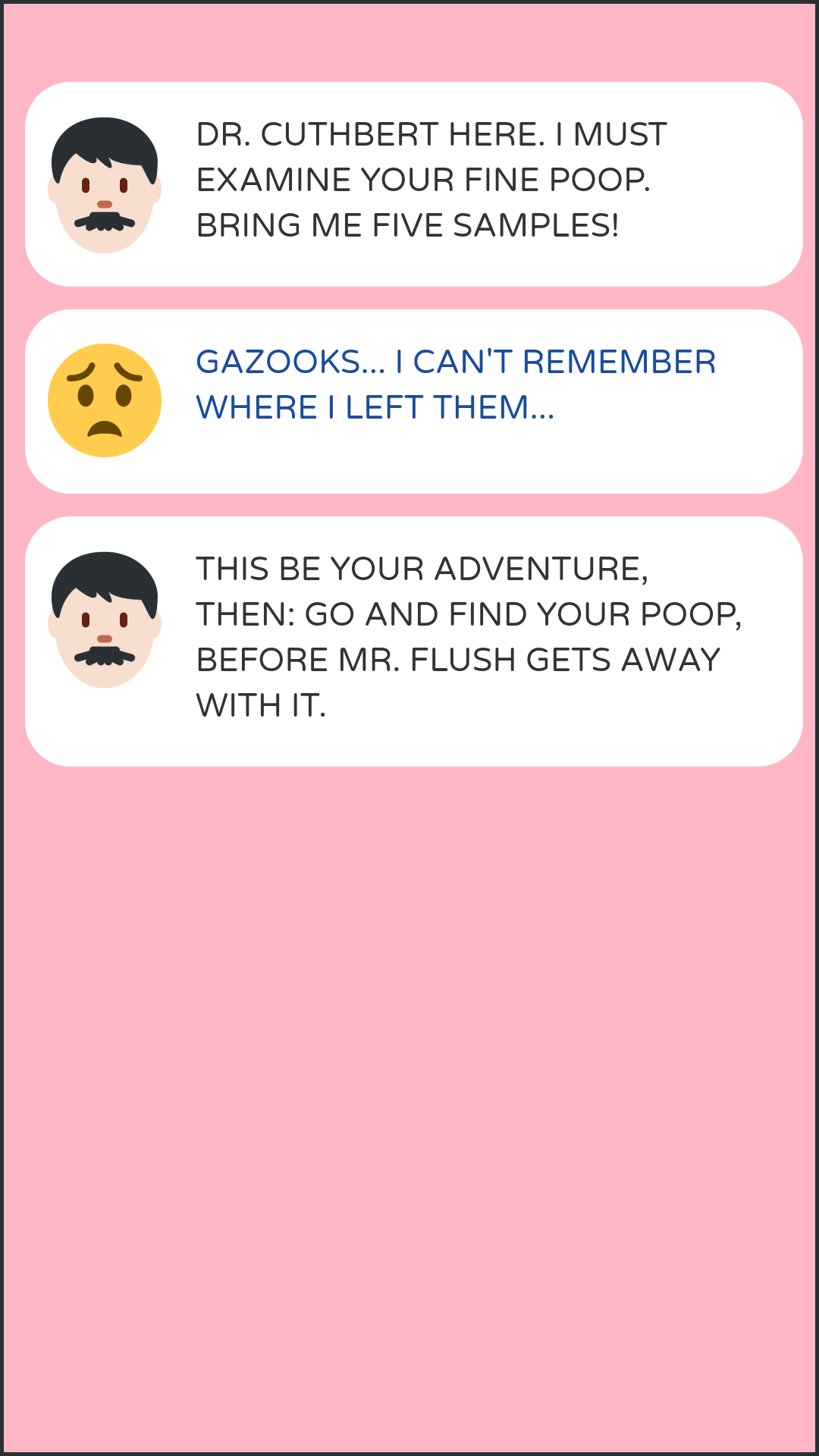 Thank you! I will be updating soon. The project is progressing steadily.

Love the game. Short and sweet. What a nice concept :)

A new devlog about "escalating agency" in text-based games: https://mishaland.itch.io/amer...

Love the premise, will be following this closely :)

Looks adorable, putting in my collection!

Hi everyone, I'm new to itch.io and new to game creation. I would like to introduce you to my first project, a survival horror game created with Twine. It's called American Angst and will feature

The setting is tried and tested (waking up with no memory in the dark), but I hope I can give it a fine twist with the story I am developing. American Angst is a pastiche of slasher, survival horror, dungeon crawler and RPG games, influenced by 70s exploitation horror flicks and video nasties like The Hills have Eyes and The Last House on the Left, as well as films like Cube, Hostel and Running Man, or games like Resident Evil and Dead Space. American Angst is my first foray into game creation with Twine. It started as an experiment but quickly scaled to a larger pet project. I welcome your constructive criticism.

Here's the page of the game. I am hoping to be able to publish it in September. As it is my first game, I will be releasing it as pay what you want. I just published the first devlog today, feel free to read it: https://mishaland.itch.io/amer...

Looking forward to sharing the game with you when it's out and find out more about your games, as well. I'm on Twitter and Facebook, too.