Thank you so much! I really appreciate that you enjoyed my game. I'm sorry if it triggered your anxiety, that wasn't my intention. For the bonus doc, you can try exiting and re-clicking on "Download or claim" and see if the file shows up. Or you can go to my new website at https://macsimilian.github.io/games/TheBurningLocks/TheBurningLocks.html where they are downloadable for free :)

It's an executable .jar (java) program. You should be able to open and run the Giant_Stomp.jar

I did, your game is really strange and well done!

Thank you! Was cool to see your stream of it :)

That worked, thank you!!

I can download a game's screenshot by dragging to desktop, but this doesn't work for the cover image / gif? Any way to get my games' cover images if I didn't save them before? Thanks!

I don't like swamps, but other than that I love the game! Perfect!

I'm talking about the review accompanied by 5-star ratings, not the comment section. Sometimes I check my games reviews and find reviews that I hadn't seen before. Would be nice to get some kind of notification whenever there's a new review. Thanks!

1. The cheese factory is actually a euphemism for smoking (which is in turn a euphemism for something else), and its counterpart in the subconscious symbolizes the cause and effect of this lifestyle on the brothers' lives. You can find out more about the creation of the subconscious, factory, and other BS in the bonus document (free over the summer sale)

Try exiting and re-clicking on "Download or claim" and see if the file shows up.

As a part of the Summer REU Research program (https://paris.utdallas.edu/reu), we are conducting a research study sponsored by NSF on software QA and find your work on Mr. Moneybag is closely related to our topic.

Could you please let us know if you are interested and have time to answer a few questions on your QA and testing process?

As a part of the Summer REU Research program (https://paris.utdallas.edu/reu), we are conducting a research study sponsored by NSF on software QA and find your work on Cloom is closely related to our topic.

Could you please let us know if you are interested and have time to answer a few questions on your QA and testing process? 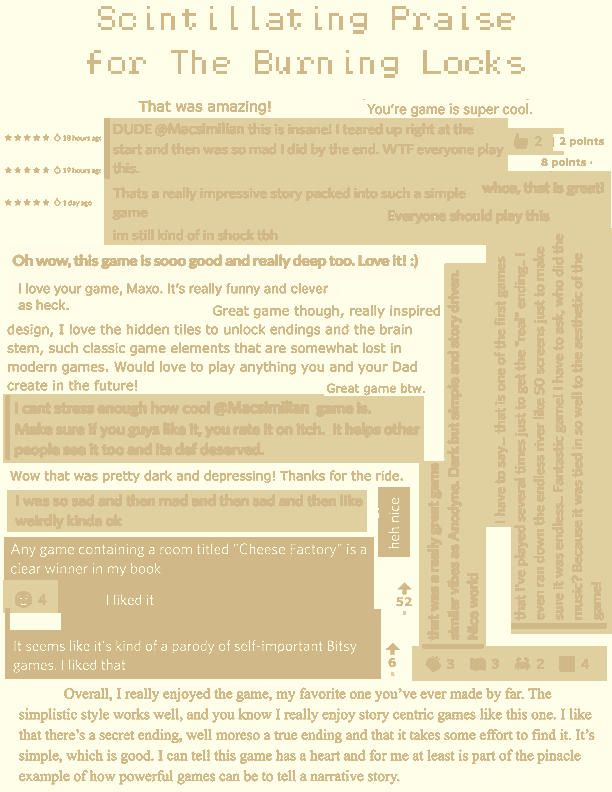 (I am mainly making this post so that Itch doesn't garbage collect this image off of img.itch.zone if that makes any sense.) The game is an interactive story/Bitsy game about a neuron exploring a comatose mind and bringing it back to life. It takes about 15 minutes to play.

I've accumulated a few suggestions, small changes, and polish, and I will be updating the game to v.1.1 as probably the final update sometime soon.

Thanks to everyone who played and gave feedback! :)

I've always known about the first screen of Mario for a while but this goes way further and more detail about it!

Reply
itch.io Community » General » Release Announcements · Created a new topic The Burning Locks - my first Bitsy game, about a neuron exploring a comatose mind and bringing it back to life
max levine stuff3 years ago (2 edits)

Hi, I just released The Burning Locks, an interactive story/Bitsy game about a neuron exploring a comatose mind and bringing it back to life. This is my first Bitsy game and something that I have been working on for the past two months. It has original music and sound effects, and an original story.

Also, I made a map of the game world, which may be useful for finding all the collectables, but I recommend only looking at it after a first play-through:

Also, I made a map, which may be useful for finding all the collectables, but I would recommend only looking at it after a first play-through. 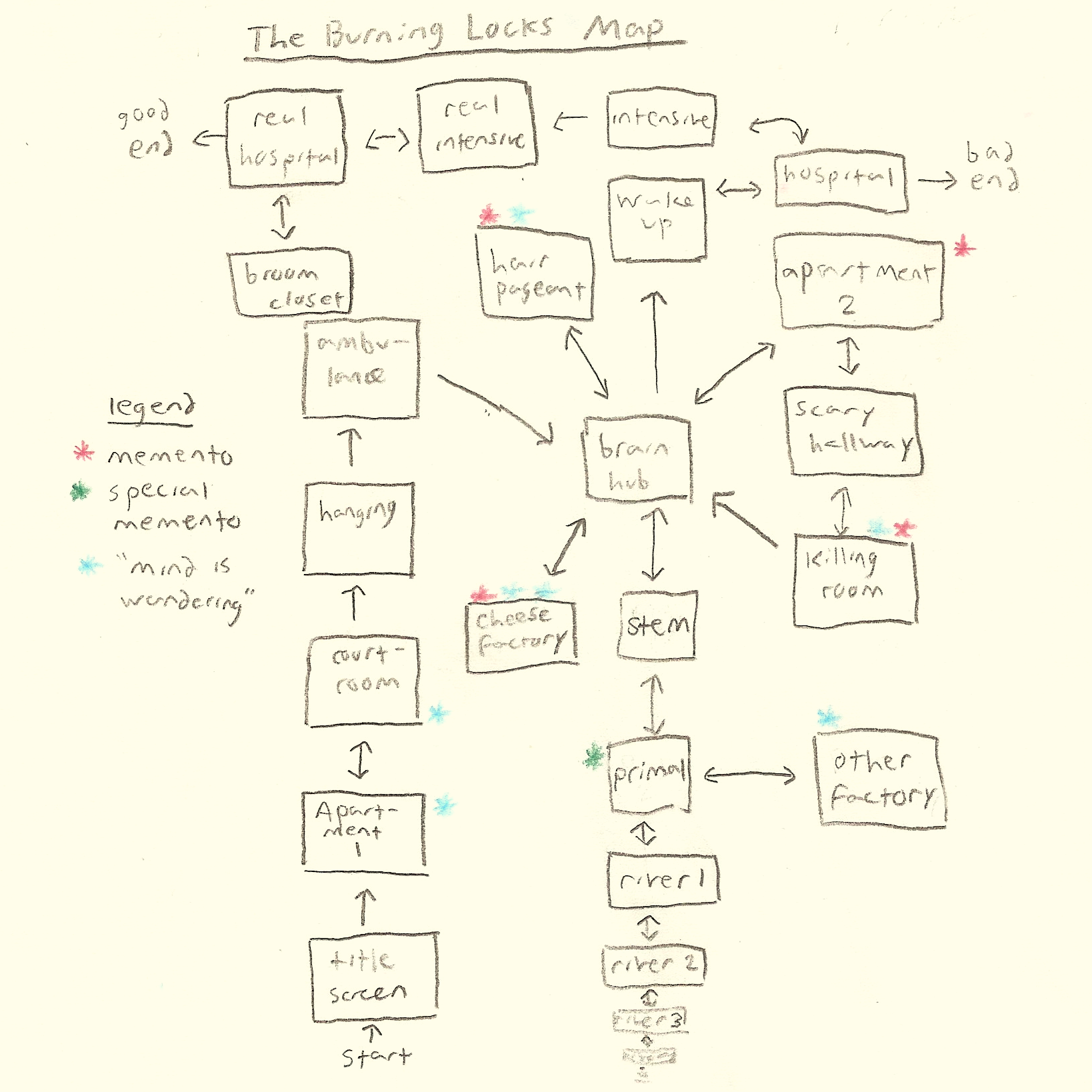 I'm also curious about how to do that. I have thought of using html frames to do this as they allow you to basically put multiple web pages in different frames, but they aren't supported in HTML5. Maybe iframes would work as an alternative. Haven't actually tried either yet though.

Reply
Bitsy Game Maker community » Bug Reports · Created a new topic I put a vanilla Bitsy game through the W3 HTML validator and there were a few bugs (not that many though!)
max levine stuff3 years ago (1 edit)

Just these two, and a warning

Fantastic, thanks for figuring that out

Reply
Bitsy Game Maker community » Help · Created a new topic Is it possible for games played on mobile to have sound?
max levine stuff3 years ago

If you implement sound via Bitsymuse or similar hack, the sound will work on desktop but not on mobile. Is there a way to get the sound to work? (In Pico-8 there is the same problem,and someone found a workaround for that)

Thank you for all this! Should be noted that changing the text color like this will make ALL the text in your game that color, even text inside {clr} tags. Took me a bit of messing around and being confused to realize this. Will definitely be hacking the next arrow's color with this though

I guess that is a good enough way to do it. You have to put it in every dialogue box, but not sure if there would be a better way, maybe a way to change the default white to something else?

Is there any way to change the color of the font, i.e. so that it's not white?

has anyone actually managed to make some custom .bitsyfonts ? looking for a writerly/cursive font but not sure if I would want to make it myself. fontsy looks like the way to go though to do that, I wIsh that you could click and drag to draw pixels (like in Bitsy) though instead of having to click each one individually...

edit: actually you can just download the .bitsyfont.png from Fontsy, edit it in your preferred image editor, then reupload to Fontsy and convert it to plain .bitsyfont, so you can do all the clicking and dragging that you need to draw a font, so that works!

I wasn't sure what you were saying until now. I have been trying to use the hack and it has some weird bug that makes it basically unusable? Some rooms will randomly get all twitchy/blinky and the game lags and sometimes skips text.

AFAIK, this isn't even a feature in the Borksy hack?

Did find a separate hack though that can do this: https://github.com/seleb/bitsy-hacks/blob/master/dist/avatar%20by%20room.js

Hmm, very similar mechanics to my Inertia! I really like the music too.

I used this PICO8 HTML Template. Without knowing any javascript, you can choose from a number of buttonsets (even a joystick if you put special code in Pico-8) and you can change the colors of those buttons. If you're looking to build your own from scratch though, can't help you there, but it may be helpful to look over the code for that template.

Ok, so "bulk keys" are the way to go instead of "download keys". But if you make just 1 key it can only be distributed to one person, and you have to make a unique key for each person? Having just one link would be helpful. And it makes you have to have an itch account and claim the key to download the files...

Unless I mark the whole game as paid (causing it to display as paid), which it is not - it is a web game. The bonus downloadables are the only thing that cost money, but making a free download key doesn't include them

I've been working on this game for a few months, and just as I was putting the finishing touches on it, ProcJam happens! Perfect timing!

In this game, all the waves in it are randomly generated using a system I developed that are better explained in the bonus document ($5), but I will give a brief description here. Two functions: create_wave() and calculate_wave(x). create_wave() generated a table of IDs, with at least one row, and at the end of each row a special ID says whether there will be another row, and if so, what to do with that next row. calculate_wave() puts the table into action. It starts with x and then performs operations on it for the 1st row in the table - this might amount to something like (1/2*)sin(-x+2)-1. Then, at the end of the row there is an ID that says to just stop there, or multiply, add to, or divide by the next row. If it were multiply, then the next thing ended up with could be ((1/2*)sin(-x+2)-1)(-cos(x^2)). Wow, I think I may have explained it better here than in the bonus document.

Also, the title screen music is randomly generated! It used the melody from DDLC's Dreams of Love and Literature, except with random starting and ending notes. There are also random buzz noises and a drum base. I haven't ever really composed any music before this.

Thanks for checking out PlusWave!