Thank you! It was commissioned as a sequel to an amazing game called The Impossible Bottle. If you haven't tried it, it's amazing! https://www.linusakesson.net/games/the-impossible-bottle/rel1/play.html (by a man named Linus Akesson).

Started playing this, really enjoying it so far! Great work, love the atmosphere.

Thanks, the suggestions are the last things I added. Look forward to trying your game!

Thank you! I appreciate it, and look forward to playing your game!

No, your reviews are actually very insightful in general. I look forward to any you post in the future!

Thank you for the review! I appreciated your insights, especially the way you were able to give positive critical comments that gave ideas for what could be improved. I'm grateful for the time you take to write these!

I've read all of your reviews, great work! I tested games 3 and 4 and loved both of them. I'm excited to try the others!

Thank you, I appreciate your kind comments!

Hmm, yeah I had some code for the online version that was messing it up. I've fixed that bug and another one that was a disambiguation error and updated the game to release 2 (for the offline version only. The online version hasn't changed, since it doesn't really use the tutorial). Thank you for finding this!

I think it's just in Dialog!

I'm glad you liked it! That's definitely a bug, and one I hoped I had fixed, but it snuck through. I've changed it in my own code and will post a new version once the comp is over (don't want to mess up the online saves of people still playing!) If anyone is in the same problem, you can type 1 or 2 in disambiguation to choose which one you want. Thanks again!

Really enjoying the game, but running into similar issues to others. I've completed most of the game, but can't trigger the in-game hint for the finding things potion or the sharpening. When I type HINT, it says that pebbles are sturdy and then the next hint gives me the full formula for sharpening, then no more hints.

I saw someone mention adding the note as an ingredient. In my first playthrough, it said the note is not an ingredient. Also, I couldn't X it, but I could READ it. Typing GET NOTE didn't change that; I still had the note, could drop it and take it, but couldn't X it or add it to the pot. Almost like the game had two notes in the code, but IDK. I started over and in the new game I could add the note, but I don't know what recipe to use it in.

Overall this is a very fun game!

Thank you, this post was very cheering to me, and the bugs and typos you found will definitely guide me in making a post-comp update. Thanks!

Thank you for your kind comments!

Thank you! I appreciate your kind words and also the bug reports!

Thanks for the feedback! I'm working on trying to trace that bug down. For now, you can finish the game by trying that same action in the room called 'heights'. Once I track down the issue I'll upload an updated version.

Edit: Got it! I'm going to update the downloads. I don't think I can update the in-browser version without people losing their saves, so I'll hold off on that until the competition is over.

I really enjoyed this game, and I'm always surprised to see people who can draw, write and code at the same time. The descriptions were very vivid.

You asked for people to send you any mistake; I only saw one, when you see the paper at the beginning: "the ritual area and its limits are definied by this"

Oh, weird. You can access its contents here: https://www.ifarchive.org/indexes/if-archive/games/competition2017/Absence%20of%20Law/AbsenceOfLaw/

It's not zipped ,though, but you could download the entire  Competition2017 zip in the same directory. Thanks for asking!

numerous hints can be found on this thread here: https://www.intfiction.org/forum/viewtopic.php?f=22&t=27010

How do you get the jaw?

I don't talk much. Let's build a fire.

Swigian is a minimalist text adventure, now available for $1. The text was previously released in IFComp 2017; this updated version comes with a full set of 60 illustrations by Marco Innocenti.

Swigian is full of material, but easy to finish. In-game help is accessible by typing HELP. 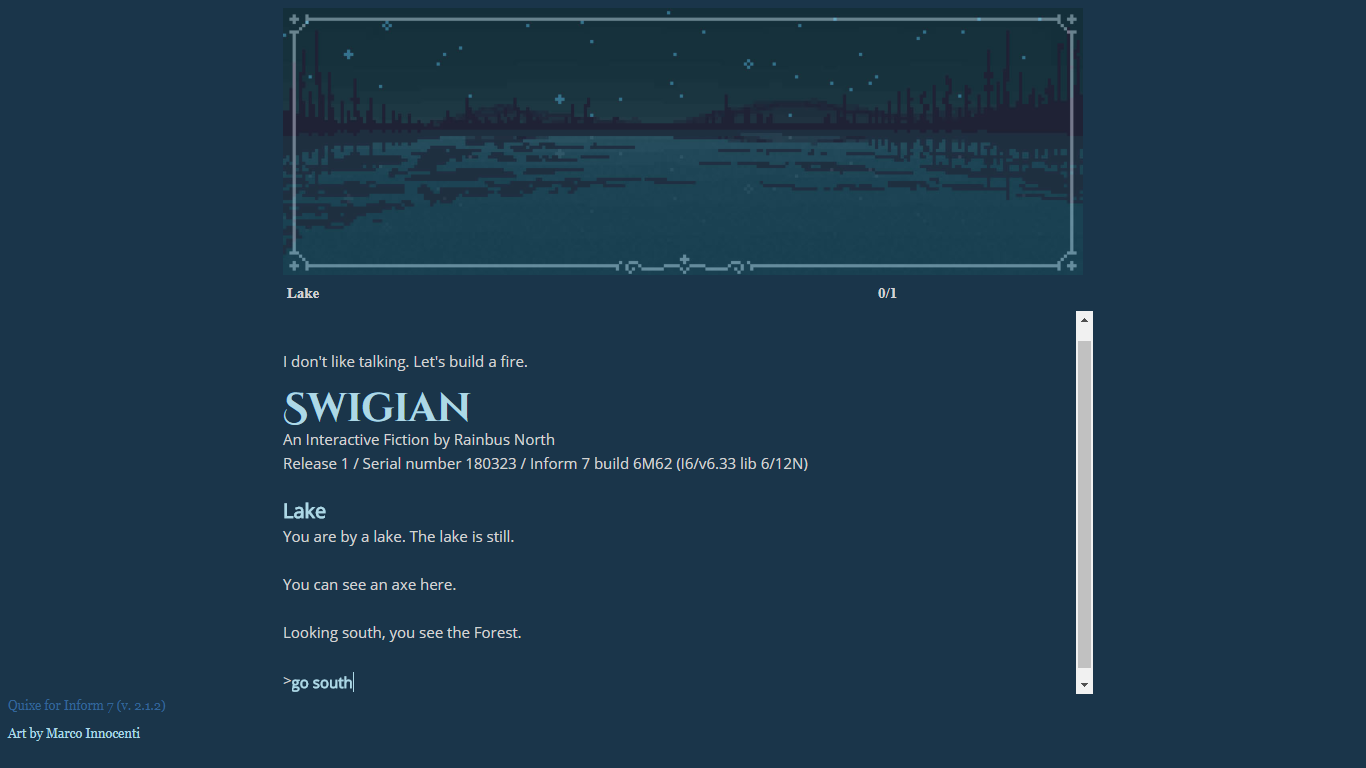 Absence of Law is a text adventure from the award-winning author of Color the Truth and Sherlock Indomitable. 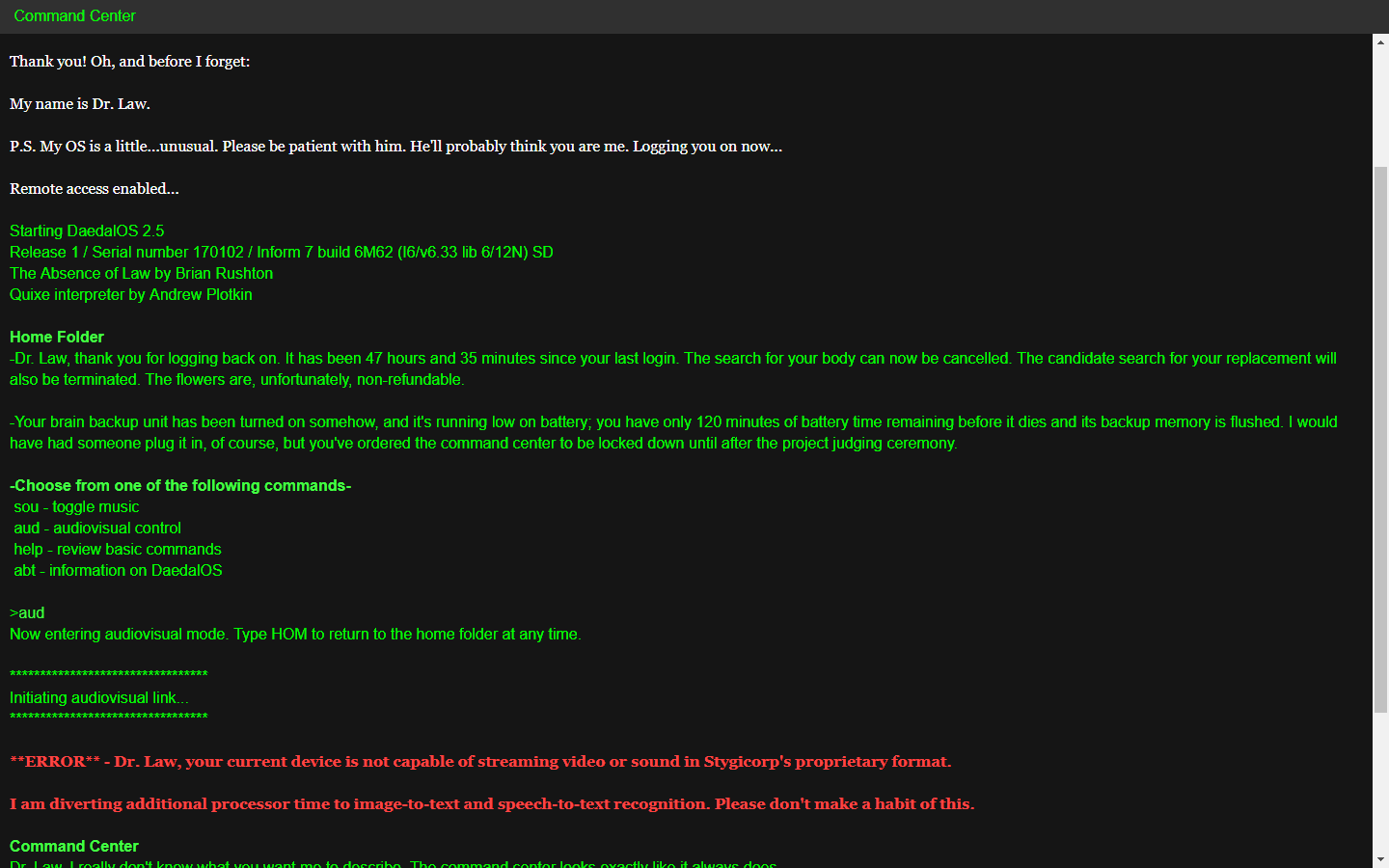 "Excuse me, can you help me? Yes, you, browsing itch.io! I need your assistance, but I don't have long. There's so much going on: remote surveillance, unauthorized cloning, forgotten languages, robots playing poker. It's time to take control!"

This game is designed to be accessible to those who have never played text adventures, while keeping a few surprises for parser experts.  The online version comes with a complete musical soundtrack accessible from the first menu

Praise for Absence of Law

"This is an ambitious work: multiple levels of interaction, several shifts in player POV, lots of rooms, NPCs, and puzzles. Despite its size, it has been meticulously proofed and tested... A pleasure to play a game with such high production quality." 9.8/10, Jack Welch (Text Adventure author and critic)

"Are text adventures getting easier, or am I just getting better at text adventures? Absence of Law is the type of game, filled with techno-babble, gadgetry and mind-bending puzzles, that would have left me baffled and confused in the past. And yet, somehow, I was able to cruise through the bulk of this game with relative ease." No score given, Narrativium (a text adventure review blog).

"[Absence of Law] is fun to play, hard and soft here and there, and also very nice to read. It's a story that needs to be told, while keeping all the puzzles that make IF such a fantastic trip, when done properly. " 5/5, Marco Innocenti (Text adventure author and critic)

What better trailer is there for a text game than a text trailer? This annual status report is a preview for the game. 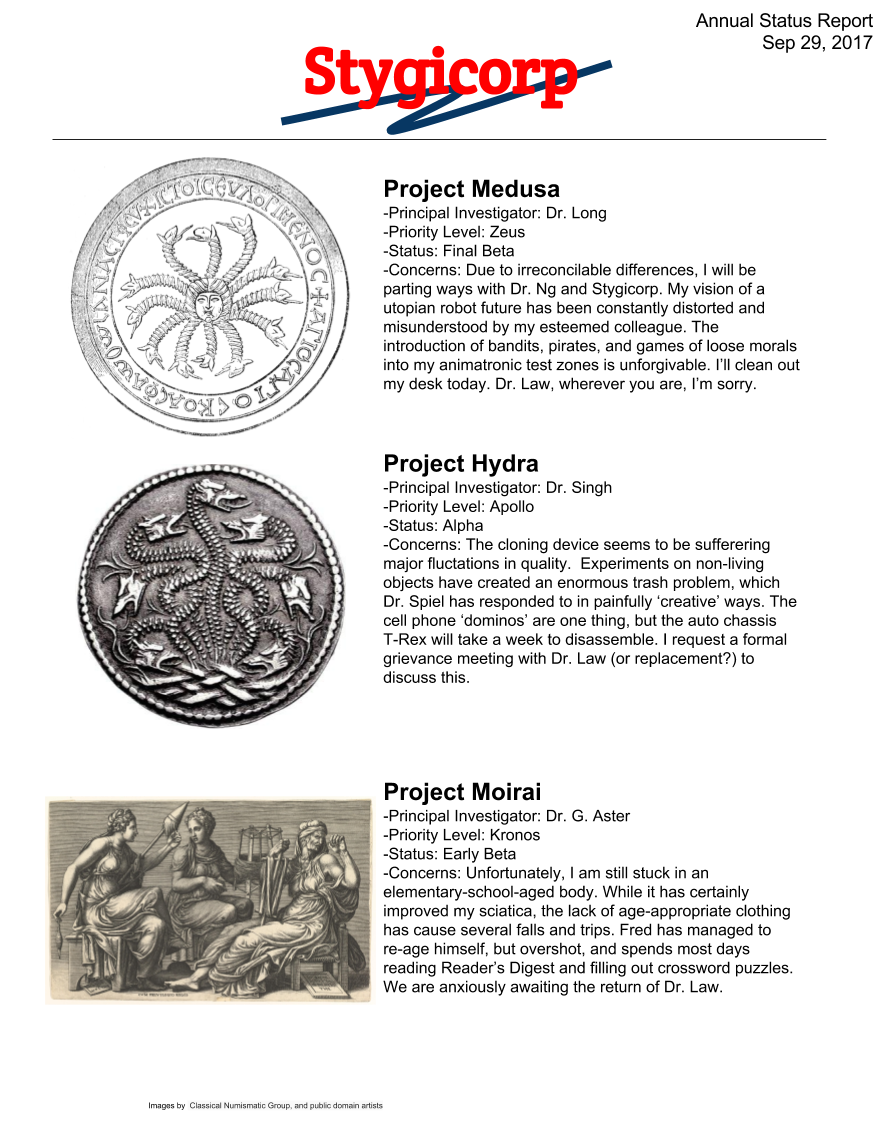 I enjoyed the atmosphere in this game, and the creativity in the 'husk' character.