Pushing the ball, pressing buttons to get bonus coins, and simultaneously placing towers for tactical defense - quite an interesting mix. I had fun playing this. Though, of course, I would like to see more levels... and fix the bug when enemies suddenly go through a wall. XD

Nah. Too easy with enemies blasted just when they push the ball.

So, it's basically a 15-puzzle game and an action minigame (I couldn't figure out how to win, sadly), both made in PHP? Impressive.

Cool! Four minigames for different tastes. The one about demolishing the castle reminds me of one of my own old projects. Firing people is fun! And the gold puzzle is the reason why this game doesn't participate in 20 seconds Jam?  I didn't get a hang of the fishing game though. :(

I also like the retro style, mimicking old jRPGs in the cutscenes. The only thing I'm confused about is the beginning of the story. Malefor just wipes the adventurers in one swoop but then says that his plans are ruined. What gives?

The style reminds me of early flash games. Not a big fan. But the gameplay is fun enough, just needed a few attempts to get a hang of it. Also, additional + for the global Hi-Score table.

Thanks, everybody! My game also participates in Game Off 2022 Jam and since the submission time for it has ended, I can't change the game (for at least a month). Luckily, I did find a fitting fish sprite before the deadline.

Hi again! I've added the second minigame. And even some sound and decor.

Btw, my source of inspiration for the game was the "Stranger Things" series. So I decided to watch some clips check what sounds and decorations would fit. Check this out (at 0:30):

One of the tests is practically your game! LOL!

Hi. Does anyone know where I can find a fish sprite to decorate my game a bit?

That's a minigame  with cards on a blue background. I thought to put some cartoon(ish) fishies there to make it look like a tablecloth. But there is nothing in the Unity Asset Store or Unreal Marketplace that fits. There are some 3D models but I want a sprite. Does anyone know other places where I can find sprites for free?

Hi. Does anyone know where I can find a fish sprite to decorate my game a bit?

That's a minigame  with cards on a blue background. I thought to put some cartoon(ish) fishies there to make it look like a tablecloth.

But there is nothing in the Unity Asset Store or Unreal Marketplace that fits. There are some 3D models but I want a sprite. Does anyone know other places where I can find sprites for free?

Hello. This is quite an interesting game but, sadly, not for me. Too many things need to be managed at once and I can't do that at such a speed. Maybe if I could move animal "starting point" with arrows, instead of mouse. But as it is, every time I focus on placing the dogs to stir the animals, another animal drops somewhere far from where it should.

From technical side, I would say the game also is pretty good, with fancy fonts and stuff. Definitely more polished than most of my own projects. The only thing I would personally prefer if the music would only play during the game itself and stop after the timer run out.

P.S. There is a bug, though I'm not sure if it's the game or Itch site. Sometimes when I load the page the browser version just doesn't load.

Okay, I fixed the bug with buttons not working after returning to menu (two bugs actually, as hi-scores were also messed up). As for the timer - it's actually there, just Itch for some reason cut the upper part of the game window (fixed it by increasing resolution).

Anyways, thanks for feedback.

I don't see any nazis in this game.

Hi, I've decided to play the game (yes, quite some time after the Jam) and stuck at Rusted Foreman. I defeated him by throwing a Photo and he left. But now I can't progress. Foreman left something shiny but it's in the middle of the lake, so I can't reach it.

Reply
RPG Maker MZ Touch the Stars Game Jam community · Posted in Will you finish or refine your game after the Jam?
LootHunter1 year ago

No. My MZ copy has expired and apparently, my game wasn't worth even a single comment. So, I'm better off with making something new, using another tool or engine.

But various types of gameplay are interesting.

A neat little game, though I'm not sure if giving the player all the spells and skills from the start was a good decision.

However, what I AM sure of is that dialogs are extremely bloated. The whole starting conversation between Kia and Felix was totally unnecessary, as (a) them talking about Star Shard at this point don't make sense and (b) they repeat everything about the backstory when they talk to other characters.

For some reason when I select an image for an event, B and C tilesets aren't in the list (they are supposed to be the last two, under BigMonster). I think it's the issue with the Standalone Jam version of RPG Maker MZ. 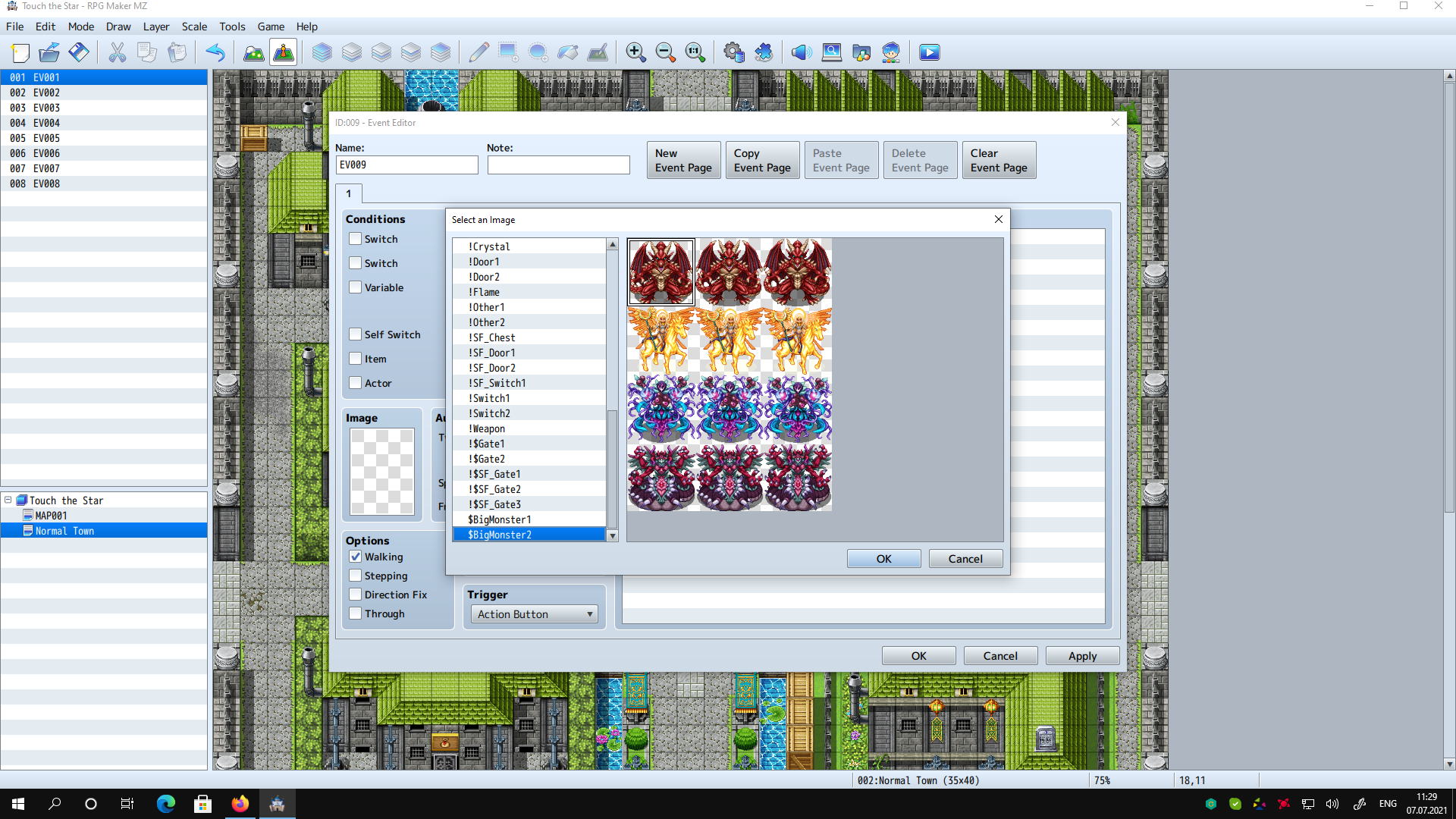 You could expand Jam description a little more. Tell, what kind of "old school" ideas you would like to see, instead of just mentioning that you don't like rougelikes.

Cool game. Though it took me some time to get the hang of the controls.

Thanks for such detailed feedback! I actually plan to submit this game (though with adding more content) to another Jam, so your insight is very useful for me. Make a separate button for jump probably indeed a good idea.

Sorry, but I just suck at this game. The concept is interesting though. However, my biggest complaint - how does it fit this Jam? Are Blubs supposed to be frogs?

Well, I haven't noticed the trailer anywhere either. XD

As for errors, don't sweat it. I barely managed to get controls working in my game before the deadline.

Also you can play it in a browser now.

Cool idea. Though I was kinda confused by the very first task to find a house with a truck - there is no truck.

Fun game. Though I would like for it to have more challenge. Just jumping on mushrooms and no way to die or lose points?

Interesting game. Though I have a problem with my 4:3 monitor. And for some reason even in window the game keeps 4:3 ratio.

I'll try to upload a fixed version as soon as possible. My idea was to make you move differntly underwater and on land but I couldn't tune it properly in time (I found this Jam on the last day and I work slowly in general).

Thanks for the feedback, anyway!

Finally reworked the interface. Also, have to fix a few bugs and improve some features along the way. Made a huge break and nearly forgot about the project.

Anyways, sorry for keeping you waiting. But you can test the game now if you want. Remember, it requires two people or at least two instances of browser window with a game.

Reply
itch.io Community » Game Development » Get Feedback · Replied to Ellisjames20061 in Need some Unity Analytics data for two of my projects
LootHunter2 years ago

Thanks for the feedback. I'll redo the game so it will be more clear what to do.

Sorry. I thought it was kind of obvious what to do - press join or create room, and when you are in a room - choose where to punch.

I'll redo the interface and maybe add a few pop-up hints to make it all better explained. Wait until the next build.

I'm learning ins and outs of Unity Analytics currently, and would really appreciate if you play two of my games:

Hand-to-Hand-Turn-based-Combat and Wrath of Archmage. Both games are mostly barebone prototypes but are playable in a browser (though Hand-to-Hand combat requires two players).

Both games' latest builds us Unity Analytics to gather data (like how many punches were blocked in HtH combat or what level you progressed in WoA). And if you play those games that will provide me more insight into how Unity Analytics works.

General feedback about your impressions is also appreciated.

I think you shouldn't have force player to return at the first level on losing. This game is rather hard as it is (with no ability to change trajectory it's too often I land right near the monster). Just return the player at the beginning of the current level.

Technically, there is an objective - spread the light by activating charges (that you need to find first). But you right about the challenge - I haven't balanced this at all. You can just swing through rooms, probably not even hit by monsters.

Hello. I just wonder if you still going to make a new version of Gelda.

Sorry if the question looks kinda weird. I'm just making a roguelike game for another jam. And when I finish, I would like to add my game to this jam too (since I've started the project last month - timeframe fits, and roguelike is an RPG - right?).

Reply
Fragment Jam community · Posted in So when exactly do you start to collect games for bundle?
LootHunter3 years ago

Reply
Fragment Jam community · Posted in So when exactly do you start to collect games for bundle?
LootHunter3 years ago (1 edit)

Btw, are "fan-games" allowed? Because I've removed all the references to Sonic franchise in my game (even changed the name), but saw among entries a couple of games referencing DnD and Undertale. If I have an opportunity to update the game is it Ok if I put them back? (It's only text references, I didn't use any graphic assets from Sonic).

Reply
Fragment Jam community · Created a new topic So when exactly do you start to collect games for bundle?
LootHunter3 years ago

I've made less shoddy version of my game, but for some reason Itch server refuses to load anything. Do I have time to upload it later? (I've already submitted the entry itself)

I have a few projects that I've published in Itch (like Wrath of Archmage here) that are basically in "prototype stage". And when I saw this Fragment Jam, I thought it would be good opportunity to finally get some feedback. Maybe update them with new levels/new mechanics. But, since they are published, do you count them as released? Or not?