Hey, Kane RayNov is here and bring you news

I have published my first game, Bright Valley, right now.

In this game you are stranded in a strange place called Bright Valley, where you have to search memories. You have only the valley to search the memories and you will always be remembered about the fact that you have already died. The only hope to get out of Bright Valley is to get the memories ... But can you handle them accurate?

This game is free and takes a half an hour  to play through.

And here is a picture of the main environment of the game: 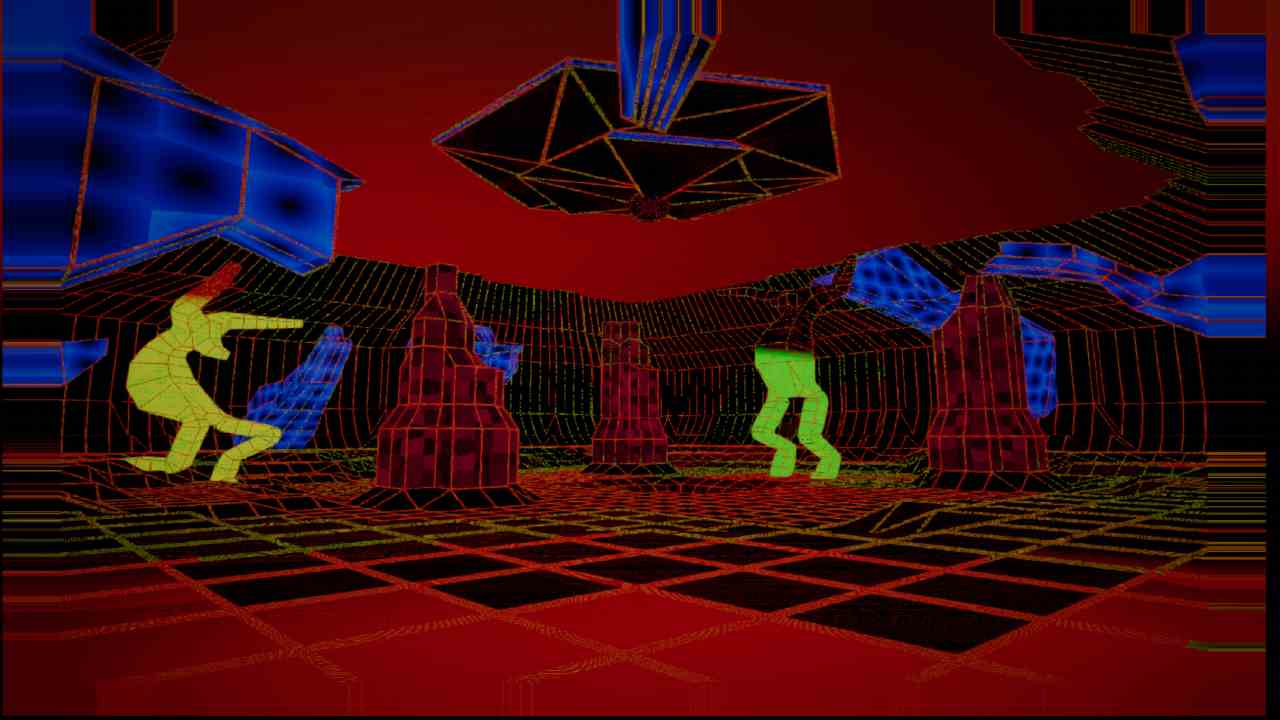 Sorry that I've not written anything in the last time, but I've deleted the project very stupidly ... It was not my fault, but I try to recreate everything from the ground up again

I've been working enormously hard on the game in the last few hours, and this is what has come out:

I've created a modular interface for graphics. It looks like this: 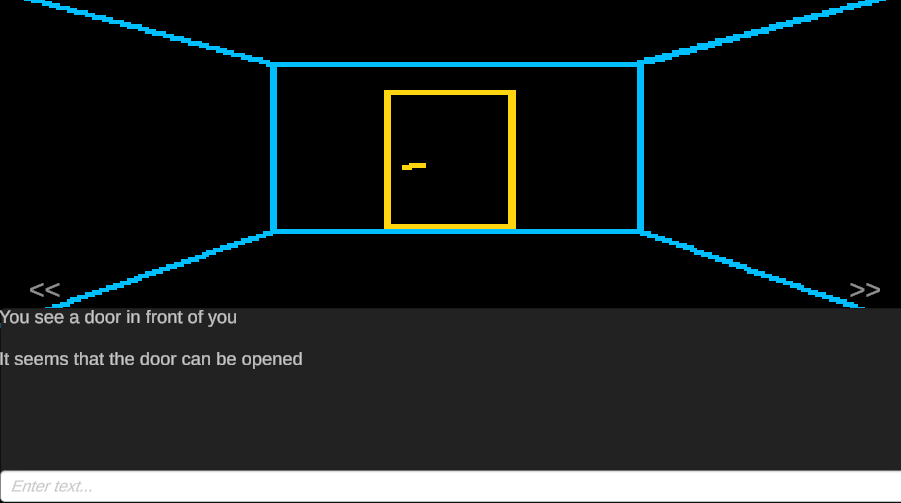 Every graphic in this game is built up from up to 9 levels, each of which is dynamic and will adapt to the player's perspective.

I designed the system so that I only need to create a few graphics to get as many ingame sequences as possible.

I try to recreate a minimalistic graphic like in Faith, a game here on Itch, and change it in my own way to make it fit for me.

I've also worked on the movement, or rather I've changed the movement significantly.
In normal textadventures it used to be that you only had one point of view per room. So you only looked into a room from a fixed point of view and couldn't change it. At least that was my impression.

I built in a new motion system where you can turn around and the graphics and everything else aligns itself with the turning movement.
Meaning: If you stand in front of a door and you press on the right side of the screen, then you turn to the right side and the door appears on the left side, and the graphics are adjusted accordingly, the values as well and also all conditions and key strings to cross the rooms as well as descriptions.

So you can say that it will actually be a click-and-type adventure.

The pov system is achieved by a counter that rises or falls with every click on one of the invisible buttons at the edge of the screen. This counter has a range of 4 points, from 0 to 3, if it exceeds the 3 it becomes zero again, if it becomes zero, then it becomes 3 again at the next step. And only after this number I adjust the graphics and everything else.

Now I still have to work on some systems, and I have to create reasonable graphics. For example I have to work on the world generator, I would like to create space clusters, so that the 1x1-chunk sized rooms can be bigger like 3x1 and so on.
And I'd like to have the possibly final design of the UI ready by the end and generate a procedurally generated quest.

If I can create a combat system or a system for entertaining and interacting with other characters these days I have to see, but it would be extremely cool

I have one and I'm using a personal edition too. Maybe thats the point^^

Else I don't have any idea where you can turn it off, but I think its very annoying ...

I've forgotten to mention that this script would let your Character go to both sides, left and right. If you dont want to do this, then you can clamp the values to one specific Outcome. Or you let the Input away and use a specific value like the Speed. Like the way you want the Character to move^^

Unity has some InputSystem for Character Movement. you want to walk on a 2D plane, so I recommend you following movement:

Try to use the GetAxis.y-Type. You can look for it in the scripting-Documentation in Unity or in one of those endless youtube-vids^^

I think this is the right type. I dunno, I havent worked so much on the UnityInputSystem, but I've worked on some FPS-Controller, and this System was very useful. You can make it like this:

You get the axis you want the character to move, then place the trigger permanent on the axis. (i.e. like you pressed the 'd'-button permanently on the keyboard if you want to go to the right^^). Then, you can add some mechanics to achieve some boost over time by adding Time.deltaTime to the Speed-Value. So you make this like this (script provided)

Maybe its not so efficient, especially its written in the Update-function, but you can build upon this and look what works better for you^^ To build the gravity-mechanic, you can put a trigger on the spacebar or so.

You can achieve this with the "Input.GetButtonDown(KeyCode.Space)"-method.

I hove I could help you^^

Wow, that sounds very nice. And it looks also very cool, I have to say. For the first game in Unity its a really good progress. Had you've been helped by anybody? (Sorry for bad english xD)+

Maybe you can do a little more challenge into the game like a gravity-changing-system. Or you can make some obstacles to avoid.

I can imagine that the movement is a little bit "hacky". What I mean; In the way the Character moves, it can be challenging for the system. In the script you provided you change the position of the character based on a var in Vector3. I think it would work better if you would work with the Unity-intern input-system. If you want to use a input for the player for the movement^^

I hope, you can make out of this idea a very good game, and if you want to have help with Unity, you can ask me^^

i didn't work too much on the game today, but i already designed a basic interface for the main menu, where you can enter and send any text (for example names, gamertag or numbers etc).

As soon as you press return, the hashcode is read from the string and converted into a sequence of numbers, which then serves as the basis for the generation.

So, tomorrow it's time for what will be the most complicated part: designing the algorithm for world generation. But that will probably only take a certain amount of time because I can develop it in Unity and instantiate the areas and so on as ScriptableObjects.

To control it I thought about the fact that you don't move by typing words, but by pressing keys, like in graphical games. WASD and so on.

I also thought about the fact that the environment is displayed as a graphic, which is built up in several layers. I will work on both points tomorrow.

See you and thanks for the tips and the nice words^^

That sounds really cool, I think you ca do this with your plan.

The mechanics are pretty simple, but I think, it can be truly challenging.

The only thing that will take much time is the polishing. maybe you should plan more time for it. The icy tracks seems to be a crucial part of the game what chooses over the win in the game, if I typed it correctly. You know what I mean, right?^^

But, I think, this can be a challenging, but very fun game. I would play it if it will be finished soon. Subscribed^^

Thats a very cool idea for a game^^

Good Luck 4 you and your project

This wolf is very cool. I couldn't do this like the way that you did it^^

And sorry for m bad english, I can't write very well and have to work with deepl to write so large texts

4U is intended to be a procedurally generated text adventure in which the player wakes up somewhere in an evolving world and must try to somehow collect various artifacts in this hostile environment.

Since the whole game is to be generated procedurally (even the basic game mechanics are to depend on an algorithm), every game run is really different. In one there may be battles, in the next the player is only exposed to a permanent loss of life.
Sometimes it could also be that both are used at the same time.

Likewise, the number of artifacts and items and the things that can be done are controlled and generated by script.
Everything, or at least as much as possible, should be generated by the scripts.

This makes the game very, very compact, but also difficult to program. I'll take on this challenge anyway, to see how far I get with procedural generation in this game.

In fact, I want either the player to be able to influence the generation or just enter a seed code to generate the world. But even this can be done by the computer for the player.

As an interface I thought I would first emulate one of the old TextAdventure interfaces, i.e. pure text boxes. But then I thought about adding graphical elements in the PixelArt style of the NES or SNES era for later versions.

How I do that I still have to see.

But what I want to pay attention to is that I build on extensiveness, so that I can always expand and extend the game if it turns out to be fun.

So much for that, in further logs I can show first pictures

01. Hey, I'm Kane RayNov and I am a little crazy Guy from Germany. My English is pretty bad, at least the writing, but understanding and reading is very good, so sorry if you have to read misspells or typos written by me.

02. No, this is my first game jam. My reason for joining is the fact I heard that this can help many people to reach their goals and get cool infos about the own project and what can be done better. And also that I can give my experience to others, if this is appreciated.

04. I have some experience with game dev, I've programmed prototypes of TDs, adventures and FPS. I've worked with the Unreal Engine, Blender, RPG Maker (XP, VX, VX Ace and MV), Game Maker Studio and Unity. Currently I use Unity.

05. I'm coding very often, I write Stories and I like to draw and sketch

06. My Goals are for this GameJam the following Points:

- A "Roguelike Textbased RPG" in a little Environment where I can build upon when the jam is over. I want to code a basic Script for the World Generation, where the player can interact with every in the text marked object through commands. Maybe, if I have the time, than I want to add a little combat system in it, and a little quest should be very nice. This are my goals for this jam, seems legit I think.