Reply
GMTK Game Jam 2019 community · Replied to Crime Dog in Design Discussion: What do you SPECIFICALLY want feedback on?
Joshuahuk2 years ago

Wow! Thank you for taking the time to write this! I'll admit, we were torn as a team as to whether we should let the player get lost. Originally, the world was a quarter the size it is now and I rebuilt it on that basis. I even made spaces to reward the player for wondering off course. Nothing especially exciting as we didn't have time for additional programming but we are likely to do more with this project so I will definitely bare that in mind.

I am playing Resident Evil 4 as we speak which is a weird horror/action crossover. I think they nailed the blend of limited resources and satisfactory zombie killing. I'll pass your response on to the others in my team and we will hopefully use it to focus the games genre.

Interesting entry! Lost the shard outside the level a few times somehow. The games shard throw is very reminiscent of 'In Death' the VR game. Good job for a 48 hour jam!

We have already taken so much feedback on board and already made some changes based on that. Interested to hear your opinions!
https://itch.io/jam/gmtk-2019/rate/461633

Enjoyed playing but quite a few bugs. Couldn't work out how to finish the level - tried jumping and planting a bomb on the dragon and tried running up to the gate at the back.

Definitely has potential if the mechanics are tidied up, especially a subtle camera move to help see the area of the castle you are in more clearly.

Beautiful game but I found it difficult to enjoy playing. Can't put my finger on why though!

Haha good point. The idea was that he has been surviving out there by himself for a long time in a zombie infested world! Then he hears a mysterious transmission and your job is to find the source! We just didn't have enough time to build a decent intro! There was three people in our team and only one works in the game industry.

Reply
GMTK Game Jam 2019 community · Posted in Looking for some good games without having to sort by popular [Closed!]
Joshuahuk2 years ago

Interesting take on the theme, found it a little difficult to get used to using the same button to control moving and shooting but it got easier with practice!

Multiple ways to complete some of the levels. Interesting take on the theme. Good job!

The gun was very satisfying to use!

Hey great adherence to the theme guys! Love the concept although I got stuck on the level with 5 enemies so had to restart and mix my team up. Also, my path got blocked a couple of times because of where I killed the enemies.

Finally got round to playing it! Great approach to dealing with the theme! Cute character design too

Sam, I challenge you to complete this game if you haven't already!

Thank you for your comment! I will be sure to check out your entry before the deadline!

Thank you, we plan to take this forward. We have already added a few bits and sorted several bugs based on feedback! We had plans for secrets and all sorts that had to be cut due to the deadline.

Thank you for your comment! I will check out your game before the deadline today!

Hey thanks for playing. The zombie rush at the end was intentional, although.. they weren't supposed to spawn on you! Sorry about that! Definitely something we could fix going forward.

Love the ideas you suggested and a lot we actually already talked about during development. Once we get the bugs out the way and possibly tweak the level design, we will definitely have a conversation about what to do with this project.

Thanks for playing! These are actually all things we discussed during development! Mostly they were left out due to the time constraint. We actually made twice as much level and moved the finish line to just after the bridge because we didn't want people getting bored!

Reply
GMTK Game Jam 2019 community · Replied to iwansquall in Let me make a joke / meme about your game.
Joshuahuk2 years ago

Once I started, I couldn't give up lol Quite addictive to get through. Smart level design too especially toward the end. I was a bit concerned the lights would just going to be to illuminate the play area but double jump, wall jump and solid shadows, and having to change them mid jump really added a challenge.

Great idea! Possibility of getting lost in the darkness... I wander off course some times lol Great use of the theme, well done.

Reply
GMTK Game Jam 2019 community · Posted in We are streaming your Games until 00.00 tonight
Joshuahuk2 years ago

Hey, I'd love to see your reaction to our game!

I'm impressed, great concept. I don't think I'm good enough for a speed run... but I managed to complete it ;) Thanks for playing our game too.

Reply
GMTK Game Jam 2019 community · Posted in Design Discussion: What do you SPECIFICALLY want feedback on?
Joshuahuk2 years ago

1) We have had tonnes of great feedback on what people would want to see from our game, thinks they like, things we could add and things they didn't like. We feel like one of the biggest issues is the level is too big and it is easy to get lost (we actually halved it during development). It does have an ending and a UI prompt to get there! We felt due to the theme being a little dark and horror orientated that we wanted the player to get a little lost. What do you think?

2) Bret thinks he the only survivor left on earth, he has a boombox with a torch and a radio built in and he has a chainsaw but they are too heavy to use both at the same time. One day, Bret receives a mysterious transmission containing coordinates and has to cut his way through zombie hordes to get there! 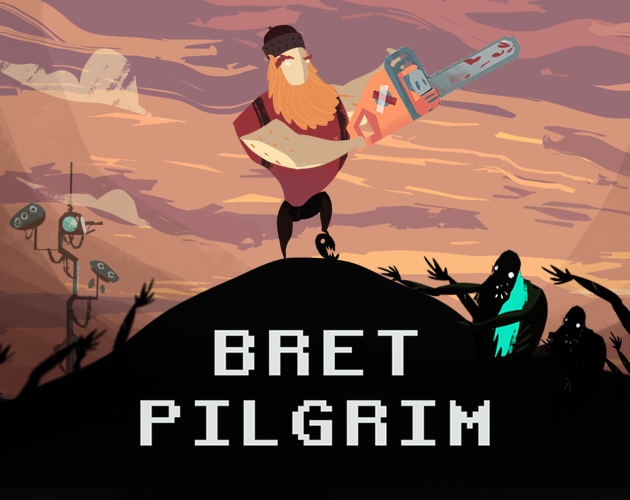 Reply
GMTK Game Jam 2019 community · Posted in I'm going to play, rate and comment as many games as I can
Joshuahuk2 years ago

Hey! See what you think of Bret Pilgrim!

Here's our entry! Check it out if you have time!

Reply
GMTK Game Jam 2019 community · Posted in Send me your games to play!
Joshuahuk2 years ago

Reply
GMTK Game Jam 2019 community · Posted in Last chance to you send me your games to play and rate! (Closed!)
Joshuahuk2 years ago

Bret Pilgrim! Let us know what you think :)

Hey, if you have a chance check out Bret Pilgrim! Zombie killing lumberjack who picks up a mysterious transmission!