wow thank you so much!! i'm glad you like it :D

thank you so much!! id love to hear how it goes!

thank you so much!!!

this is super interesting! my gm-brain is already bubbling with ideas for how this could be used

thank you so much for your feedback!! :D i'm definitely looking forward to updating the game to include some examples of play and probably better formatting and some other proofreading to make the game feel more fluid, taking the great feedback i've gotten into account

thanks so much for your feedback! glad you liked the game!!

thanks so much! that's absolutely okay and i'd love to hear your feedback :D

thanks for the feedback! i definitely agree with that point on examples of play, and i'm glad you thought the style was cool :D

absolutely love the cool setting and worldbuilding going on here! i think it's also super interesting to have difficulty tied to the number of words in a challenge

i dig this!!! v excited to see where it goes if you choose to build on it : D

A game about pairs of Pilots fighting within Mecha. It uses a system called HOLD to reward players for understanding what their partners will want to do.

EYES AND HANDS is a tabletop PbtA game about Mecha and miscommunication. The main mechanic is guessing what your partner is going to do and trying to act in synchronization. Choose from up to 7 models of Mecha and do your best to fight the Hellborn. 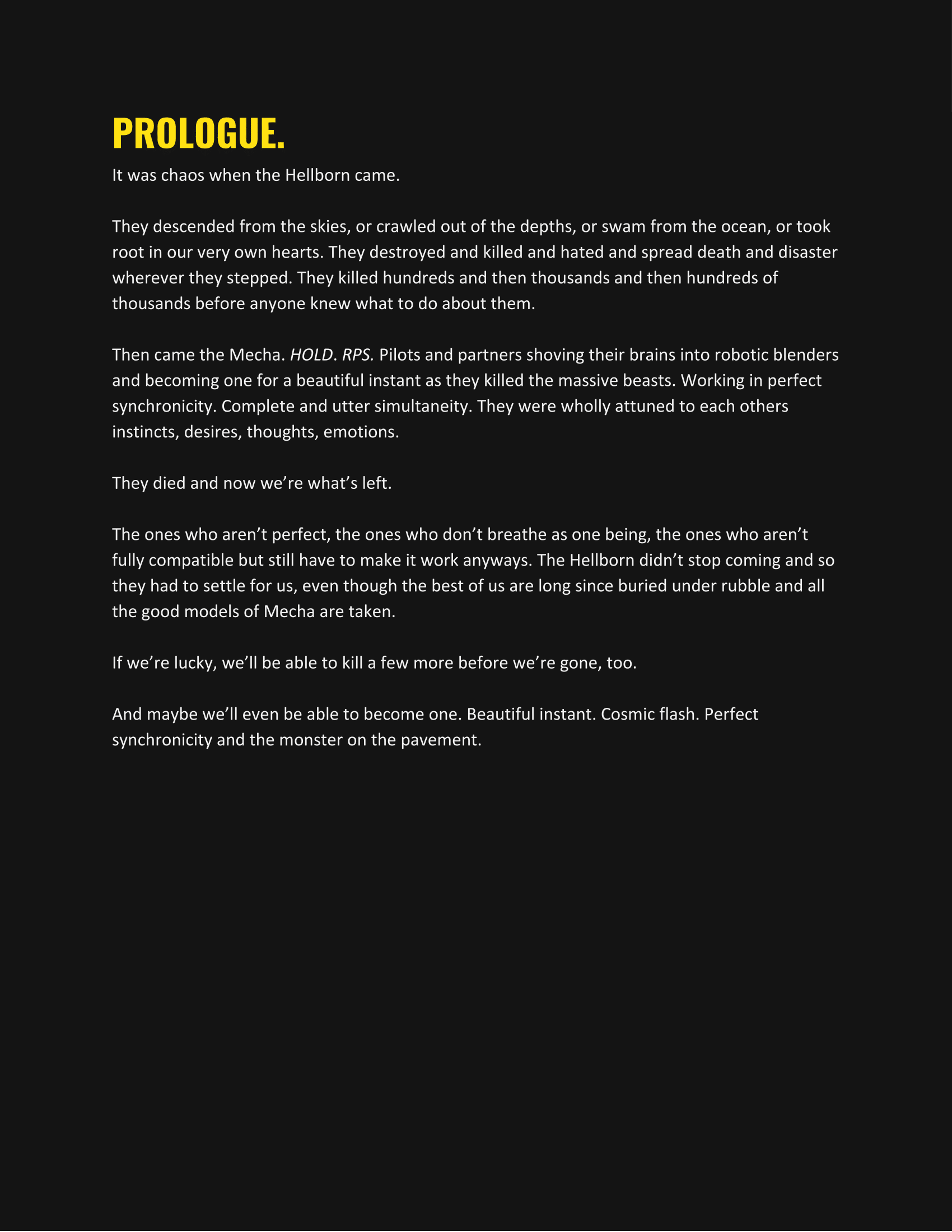 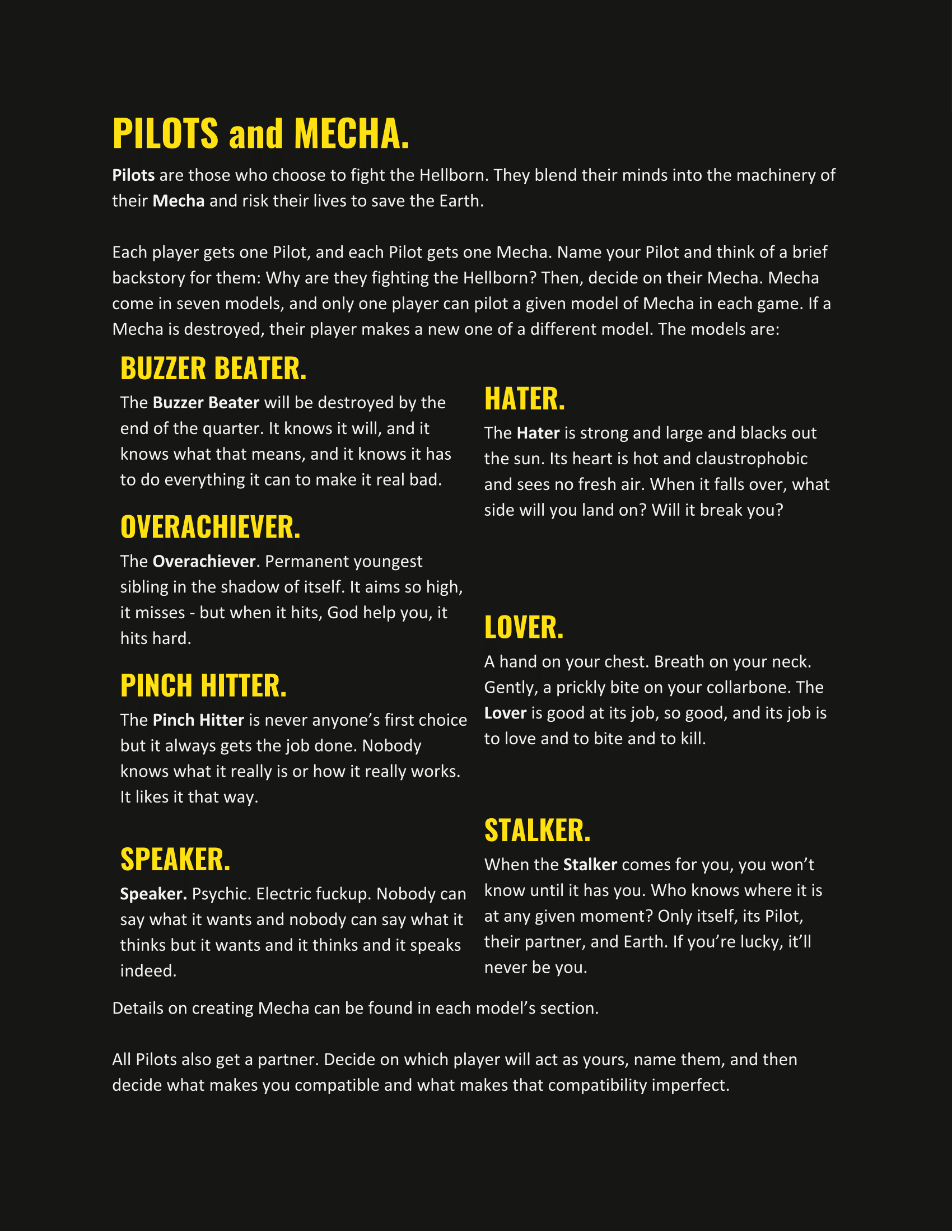 i toss a coin into the puddle and make a wish. it plops into the water, but doesn't seem to disturb its surface.

i start constructing glass windows, carefully making sure the glass fits perfectly into the frame, and then busting it in with some rocks. i collect the fragments just in case they could come in handy, or if nothing else, to make into some sort of art installation later.

is it a warning sign? is it an ice cream cone? is it an ancient relic?

it's none of those things! it's just a fuschia and yellow cone-shaped mass so let's all agree to be civil about it

Combat system and equipment have been fleshed out.

In this version, the magician class has been fully revamped - now, it's far more balanced, tightened and refined to a more interesting play style (and to work more easily with other spellcasting classes in terms of meta-class structure).

Luck is a tabletop role-playing-game with the unique mechanic of allowing players to create new stats on the fly by spending points of luck. It is currently in version 0.1.1; several classes have been added to the game as of right now, in 1st-level forms.

The current available classes are figher, rogue, wizard, cleric, duelist, and magician. There are also several spells included at the moment; later in development, there will be a system implemented for translating spells that are currently class-specific into other classes, as well as creating custom spells. Enemies will be the last thing to be implemented, with extensive formulaic tools for enemy creation. However, first on the slate is the creation of a combat system, as well as a section for equipment.

If you'd like to take a look at the game as it is right now, check it out here.

Luck is a tabletop role-playing game in which the player can, at any time, create a stat on the fly by spending a point of luck. With a wide variety of classes with unique, interesting mechanics and gameplay styles, accentuated and complemented by the luck points system, Luck provides for a more customizable, interesting, and personal experience than your average tabletop RPG.

You may have played other tabletop RPGs, but you've never played Luck. Check the game out here.