Butler is great, makes things so much easier. I should have start using it earlier :)

I'll put that issue on hold then and get back to it if I can later reproduce it myself.

The mouse wheel control problems have been "fixed" by removing it completely. I didn't know it can warp through walls but the huge acceleration spikes from it caused all sorts of other problems.

Thanks for the help again! By the way, I have a big update almost ready with some of your suggestions implemented :)

Hi again, I'm trying to reproduce that random black box issue but I can't see any. Do you remember if they were there already at start of level or after playing a while and destroying things?

What OS are you using and on what kind of hardware?

I don't use zip for Linux release because it doesn't preserve file permissions on executables.. at least I thought it didn't.

I actually already added an item to my to do -list for finally checking out Butler :)

I initially wanted to make all the upgrades and power-ups persistent but then the difficulty would have to go up much faster too and it would make it even less predictable due to the random/procedural nature of the game. This could easily lead to unexpected situations where a really good player could keep on playing indefinitely or a the player would face an "unfair" difficulty.

I have some power-ups planned that have limited usage and those will probably stay between levels.

That black box is likely an unused cube mesh instance.. I though I fixed that bug a long time ago but apparently it has returned. Thanks for pointing that out.

I used to have all game files in a sub-directory but I had to change that for the Itch.io app. I'm not sure if that is needed anymore, though.

Thank you for the feedback again!

There's one more enemy type coming after that. It has the same model for now,  but very different behavior ;)

One item  on my task list is to experiment with decals to add variation to walls. At one point, I tried differently colored wall "themes" used for certain parts of  the level to add variation and help with navigation, but I never got it to look good enough, so I removed it.

The isolated and claustrophobic feel is sort of intentional. I haven't really made up my mind about where the maze is located but space is one option. Now that  there are no windows, I don't have to choose :)

As for the variation, I'm planning to add secondary weapon power-ups and I might add some new enemy types too. I initially planned to generate varying sizes of levels but then settled for the current relatively small size to keep the average level completion time short.

How far did you get? If you got to level 8, then you probably saw all the enemies there are.

The game is being developed on Linux too ;)

Thanks for pointing out the missing input methods. I had forgotten to fill any of the metadata for the game.

Unfortunately no. I once had a test build for Raspberry PI 3 during my arcade cabinet project but I didn't keep that around (didn't run well enough due to GPU).

Are you sure that would even work? The game requires "desktop" OpenGL and your phone likely supports only GLES.. unless the emulator does some magic.

Played the Windows version on 64-bit Linux with Wine (didn't want to install all those i386 dependencies) and it worked flawlessly.

Really fun to play and looks pretty. Surprisingly the difficulty was just right for me. Often games like these require too much split-second timing in jumping and shooting. Controls felt good.

Thank's for making this video, it was fun to watch!

Thank you for the feedback! I think some of these are already there in some form, they just might need some tweaking:

1. I haven't seen this as a problem, but it shouldn't be too hard to make the highlight more visible. Added to my todo -list.

2. I have intentionally limited the menu control to certain players to prevent "menu fighting" as multiple players try to navigate in menus at the same time, either accidentally or intentionally. For keyboard, it's the rightmost player as arrow keys/enter is the logical choice for menu controls. Selecting should work with that player's fire buttons (right shift/ctrl) too.

3, 4. You should be able to navigate the menu using the first gamepad's dpad buttons and X/A button. The menu and controller help overlay should toggle by select/guide and start -buttons. Does this not work?

5. This is already on my todo -list (as low priority item, though).

6. The reason for not using  the "triggers" is that depending on gamepad they can be digital buttons, analog triggers or completely missing. One set (the upper on XBox/PS controllers) of trigger buttons is (almost) always present and digital.

The controller remapping question comes up often, but it's unlikely that I would add that. I have instead tried to add alternative buttons for things that annoy people the most. The reasoning is that this is supposed to be a party game where players change often. If the controls could be changed, most of  the time would be spend in menus tweaking  controller settings instead of playing.

7. I'm not sure if I understood the problem.. Right stick only turns without accelerating.

I uploaded the controller app APK to the game page here. Let me know how it works.

I did not submit the app to f-droid, but might reconsider that later on.

That's a good idea. I will look into this..

Hyper Ultra Astronautics is an intense space arena shoot'em up designed from ground up as party/couch game. It features solo, competitive and co-op game modes, a selection of unique weapons and thruster-based controls. Play using keyboard, mouse, gamepads or use your mobile device as a controller.

Downloads for Windows and Linux are available on Itch.io page: https://fractilegames.itch.io/hyper-ultra-astronautics

I have been working on this game for nearly four years (yes, I'm a lazy solo developer) and it feels good to finally finish it! I've had quite a few distractions and side quests during the development, including a bar-top arcade cabinet for this game. I will of course continue fixing bugs and I might even add some new features in the future.

Hyper Ultra Astronautics is at its core a simple space arena shoot'em up  with solo, competitive and co-op game modes and wide selection of weapons. The less usual features are semi-realistic thruster based movement, teleport technology based mechanics and support for up to 16 players on a single PC (Windows or Linux). 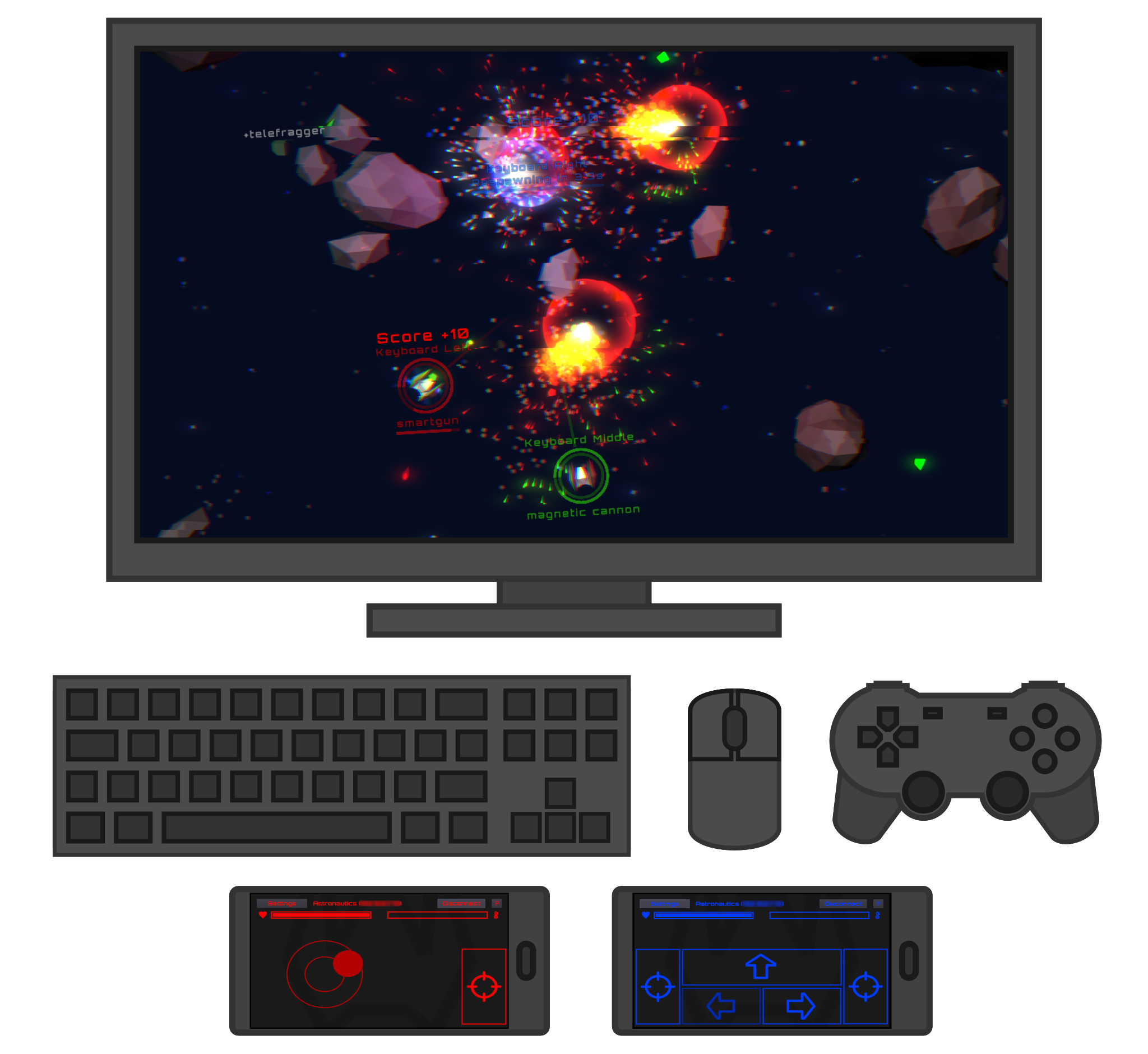 Gameplay trailer (slightly out of date):

The game has been in development for a very long time and it is now nearly ready, but I'm still looking for feedback on the beta versions. All feedback will be appreciated!

After embarrassingly long silence, a new beta version 0.1.3 is now available! Here's what has changed:

This time the mobile controller application (Android) has been updated as well (available at GooglePlay shortly):

I have been using a PS3 controller for testing all the time. Perhaps your's is some different variant. I will add it in the in next version.

I have no experience with Switch controllers, but I will keep this in mind if I ever get my hands on one.

Thanks! I haven't actually seen their setup live yet.

There is a bunch of command line options for starting the game (listed in readme.txt file), but no option to directly select the match type. Now that you mentioned it, I wonder how they deal with this at the museum and why they never asked for such option. I will add it in next version.

You can edit ~./astronautics/configuration.xml file manually for some extra options like disabling keyboard/mouse controls if you plan to play on phones only.

Maybe you could post a picture/video of your setup here, when it's done?

Anyways, let me know if you find anything else that would help with setups like yours.

A quick bug fix release 0.1.2 is out with following changes:

Thank you for the video! It's good to hear you enjoyed the game. I will be sharing this around :)

The f irst beta version 0.1.0 is here! Here's what has changed since the last alpha version:

Reply
Hyper Ultra Astronautics community · Posted in Can you make it for Mac as well?
FRACTiLE Games2 years ago

Have you tried using Wine on mac? I haven't tested it recently, but the game ran well on Mac using Wine at some point and I haven't knowingly broken it.

Technically, making a native OSX build should be possible, but I don't have any Apple hardware to built/test on.

I'm planning to set up a "mod" with minimum price that would enable additional features in my game.  Will the Itch app automatically install the additional file(s) to game directory, if the user has purchased the game with high enough price?

I tried uploading a test file set up as "mod", but it was only listed as downloadable file and didn't show up in Itch app at all.  This would mean that the user would have manually save it in the right game directory. I hope that's not the case..

The alpha version 0.0.16 is here with following changes:

It sure took its time, but a new alpha version 0.0.15 is here! Here's what has changed:

New alpha version 0.0.14 is here with lots of changes:

New alpha version 0.0.12 is here with some important bug fixes:

Note: This version fixes a bunch of compatibility issues, so If you have  previously had problems launching the game, now is a good time to give it another try!

I decided to stop building 32-bit Linux packages. Maintaining 32-bit build environment seems like a waste of time as barely anyone has downloaded the 32-bit version and apparently practically every gamer on Linux uses 64-bit distribution now. If you really need the 32-bit version, let me know.

How does Itch app handle purchase tiers? Can I somehow set up a file (for example a level pack) with minimum price that gets automatically installed to game directory for users that have access to it?

Weapon balancing and difficulty progression in survival mode needs adjusting. I need your feedback on this. Let me know if you think some weapon is way too powerful or weak. I'm also very interested in hearing how you feel about the difficulty of the survival co-op mode?
Reply
Hyper Ultra Astronautics community · Posted in Alpha/beta test releases
FRACTiLE Games3 years ago

New alpha version 0.0.6 is now available. Here are the changes from previous version:

The mobile controller application has also been updated with About -dialog and much improved virtual joystick.
Reply