POV: You're the only crewmate left

It has been told and not quite once that there will never be multiplayer. (at least official)

This "still running with closed game" problem isn't actually tied up to MewnBase. It's a Steam problem as I had it with other games (Valve's too)

Reply
MewnBase community · Posted in what about hostile creatures?
Delofon1 year ago

They are currently in development. See his Trello board for details.

We know why you hate this issue.

If you wonder what happens if you go pretty far away, you're welcome.

Since we're using computers, I'll write what happens every power of 2.

I'll go along X axis, leaving Y axis at 64. Keep in mind that if you go along Y axis same happens as well. 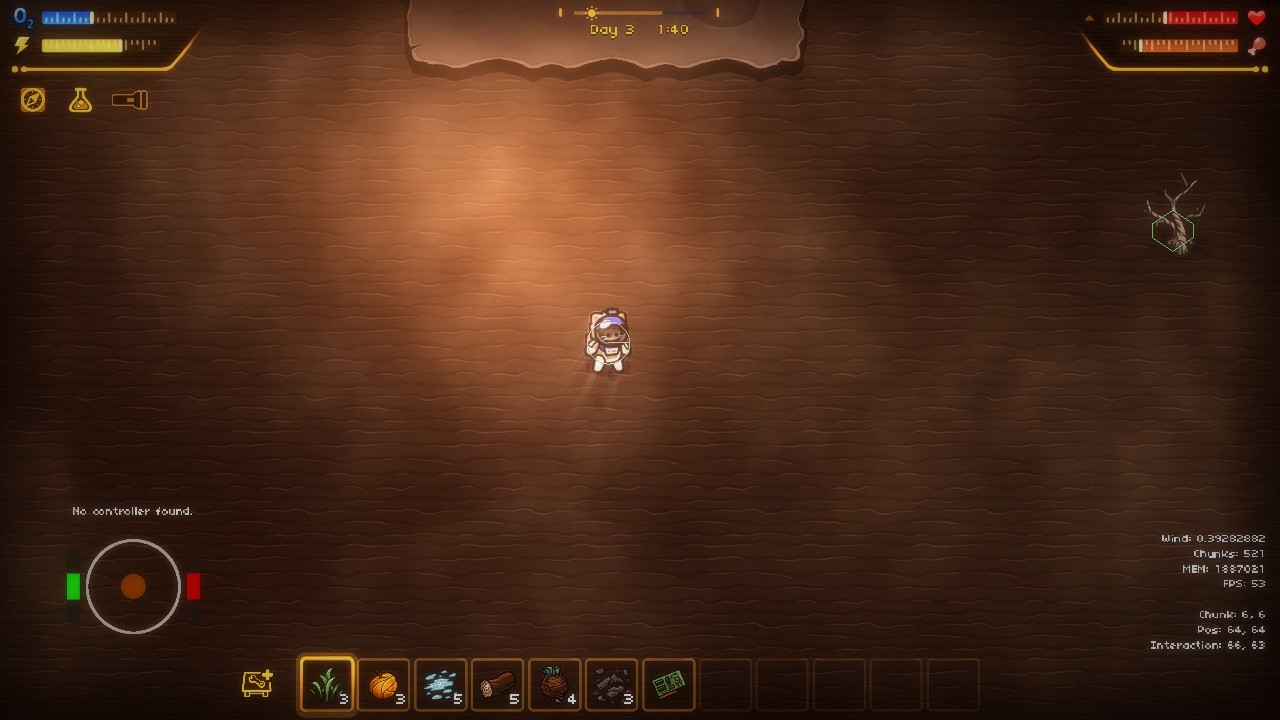 2^18 (262 144): The game is still playable, but you can notice that OpenGL is giving up since it's giving black stripes of nothingness. You can interact with the environment. 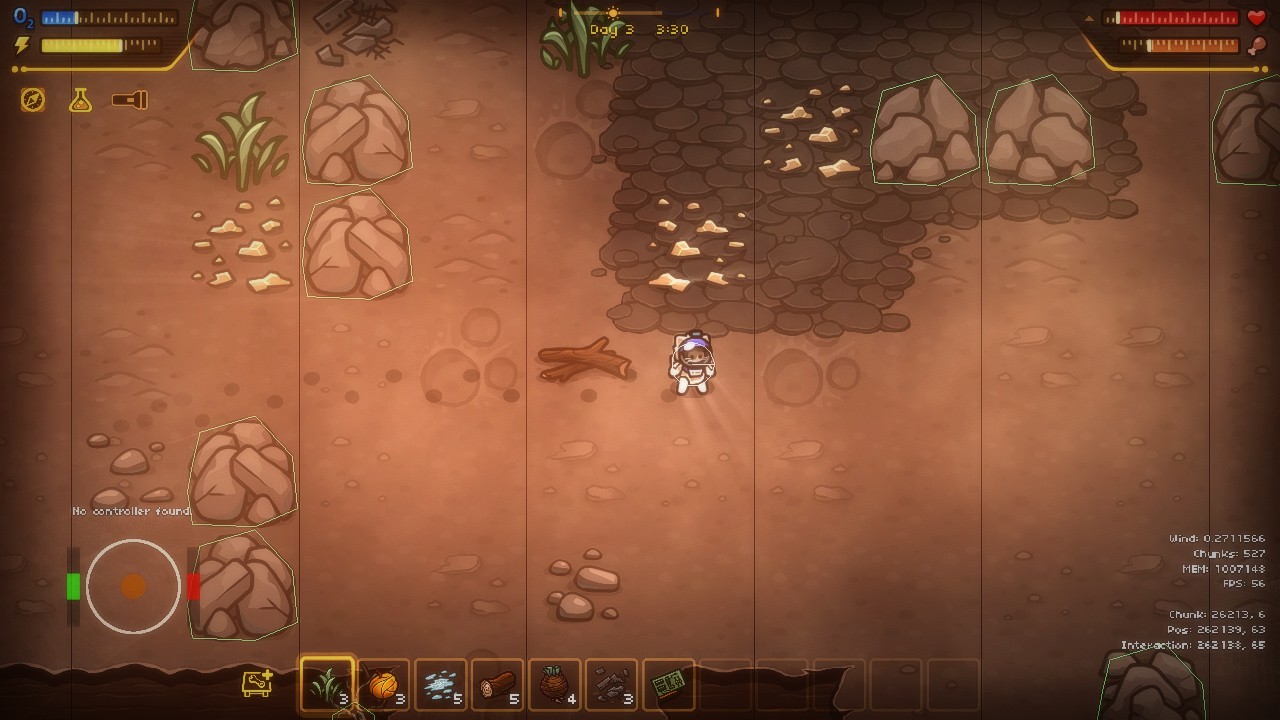 Inbetween 2^18 and 2^19 (393 216): Physics engine is giving up as well. Every object physics is distorted, but you can still can interact with environment. 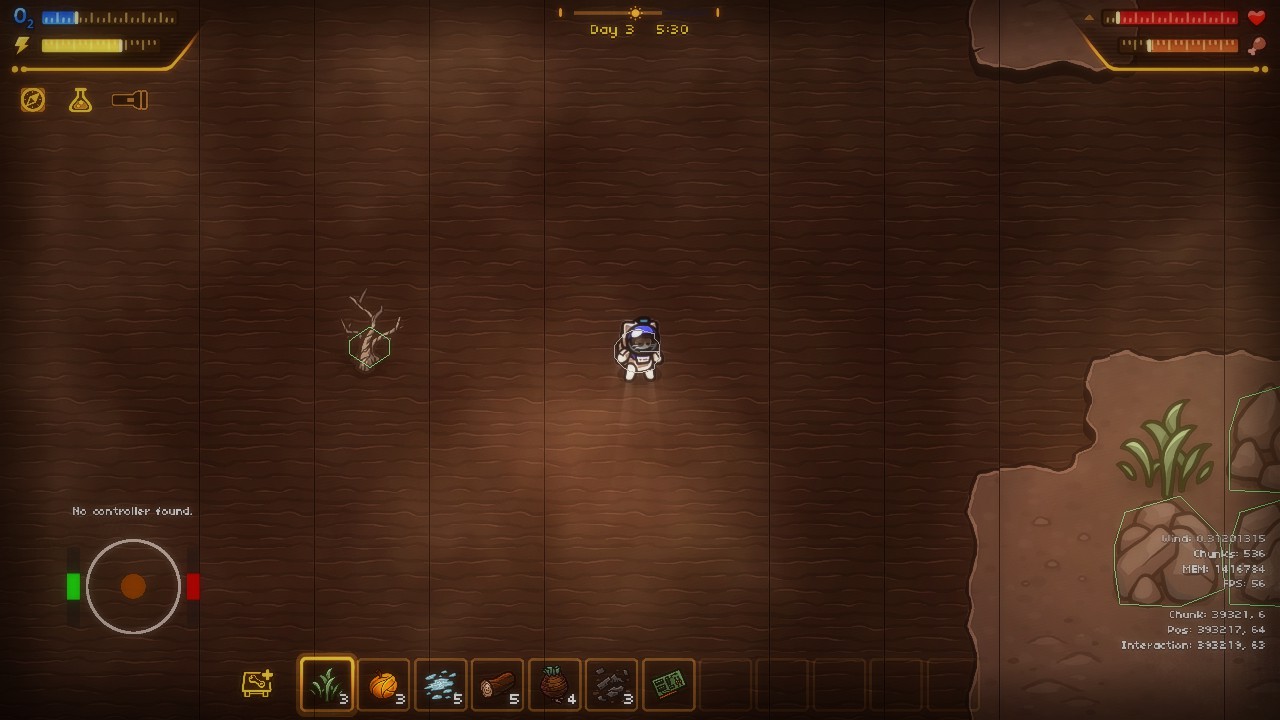 2^19 (524 288): Something incredible happens. Right after 524 287, you meet an invisible wall. From 2^19 and to infinity, you can't move along that axis, but the remaining one is still "functional". You can interact with the environment.

P.S. Huh, could this ruin rocketry? I don't think so. 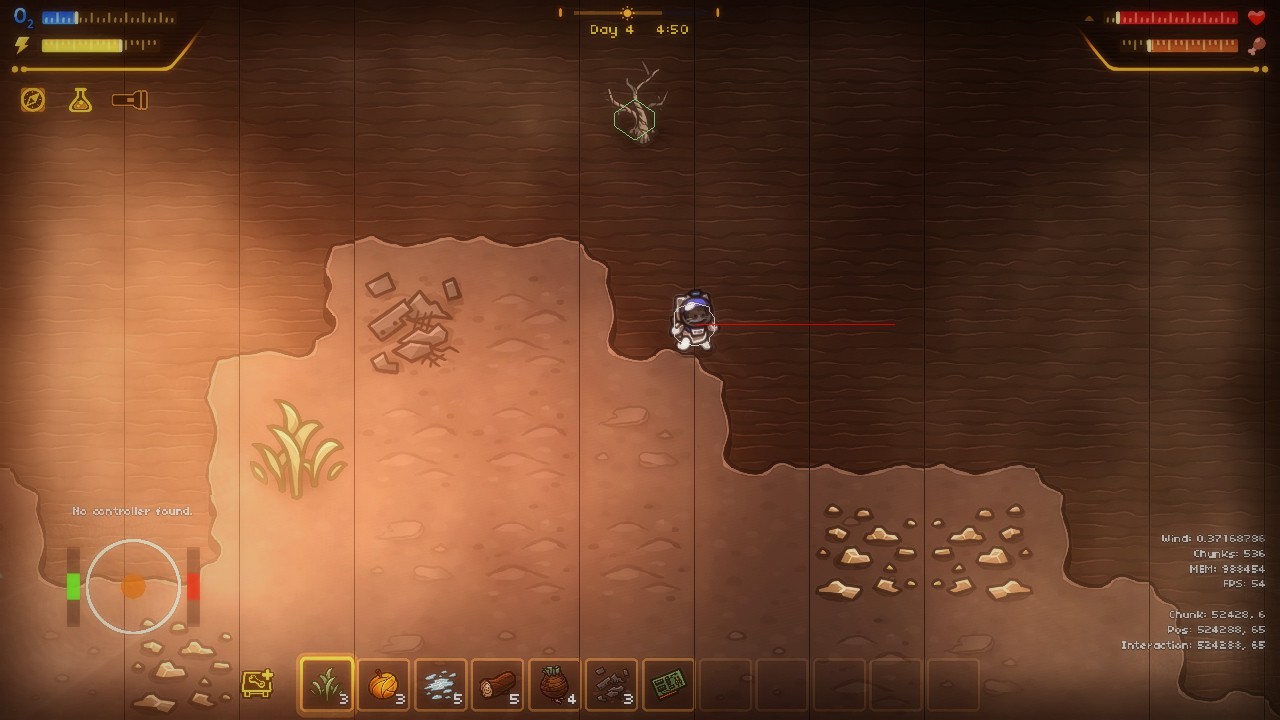 2^20: Physics engine is suffering. Just look at the cat! The physics for it is amazingly distorted! OpenGL giving up even more. The black stripes of nothingness intensify. You can interact with the environment. 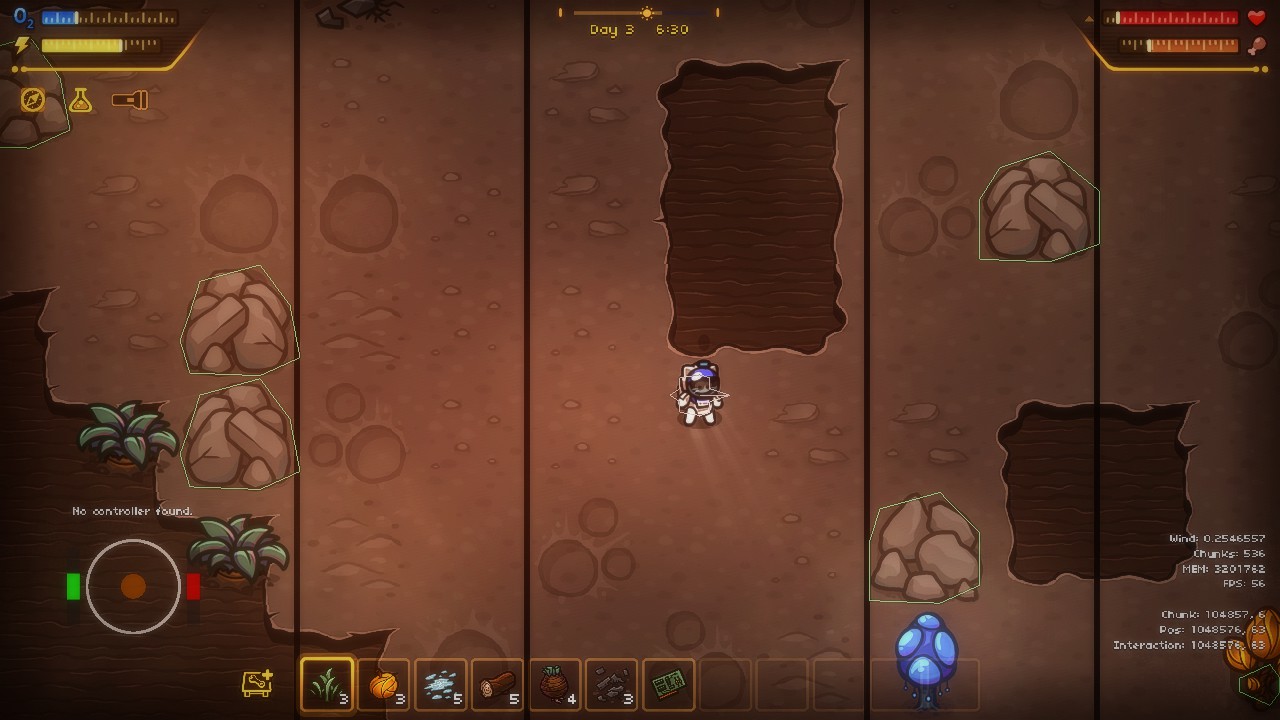 2^22: Now I definetely can say that physics engine suffers even more. No, physics not just distorted, but it also came out of existence for the small objects. From this point, it's hard to interact with anything. 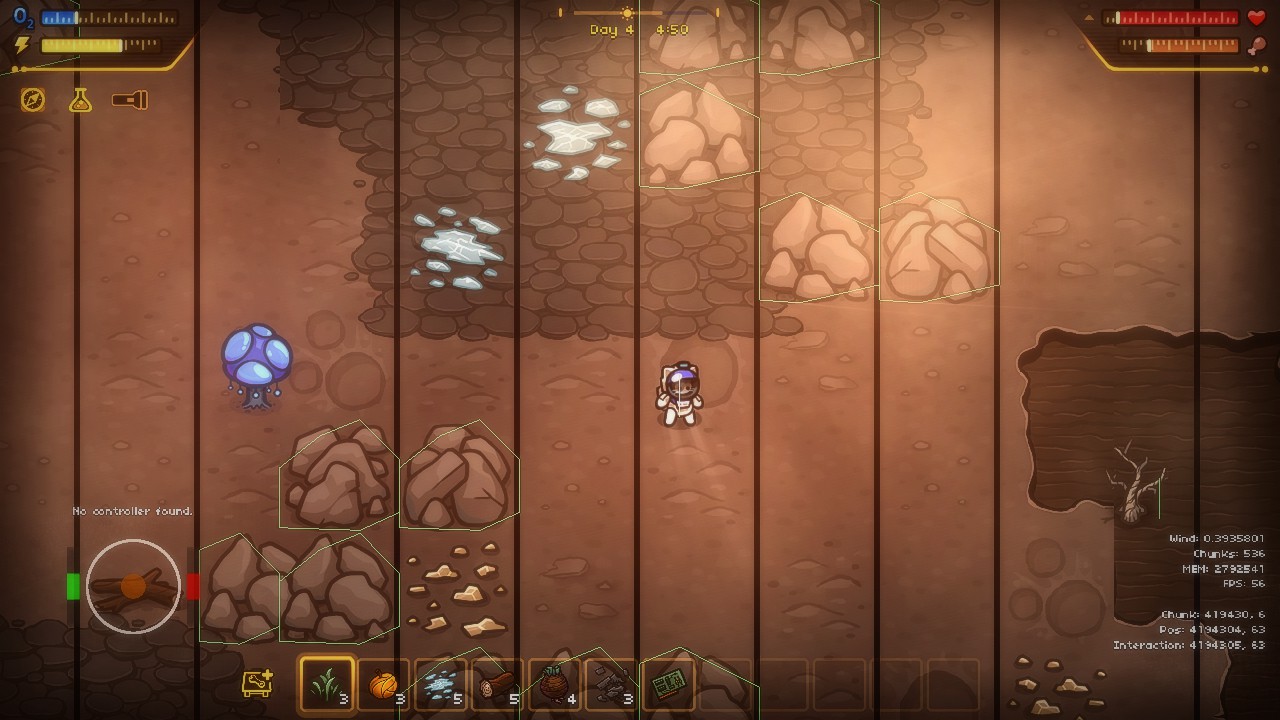 2^23: Physics distorted even more, and "interaction hitbox" is distorted as well. Try to interact with anything, because you probably can't! 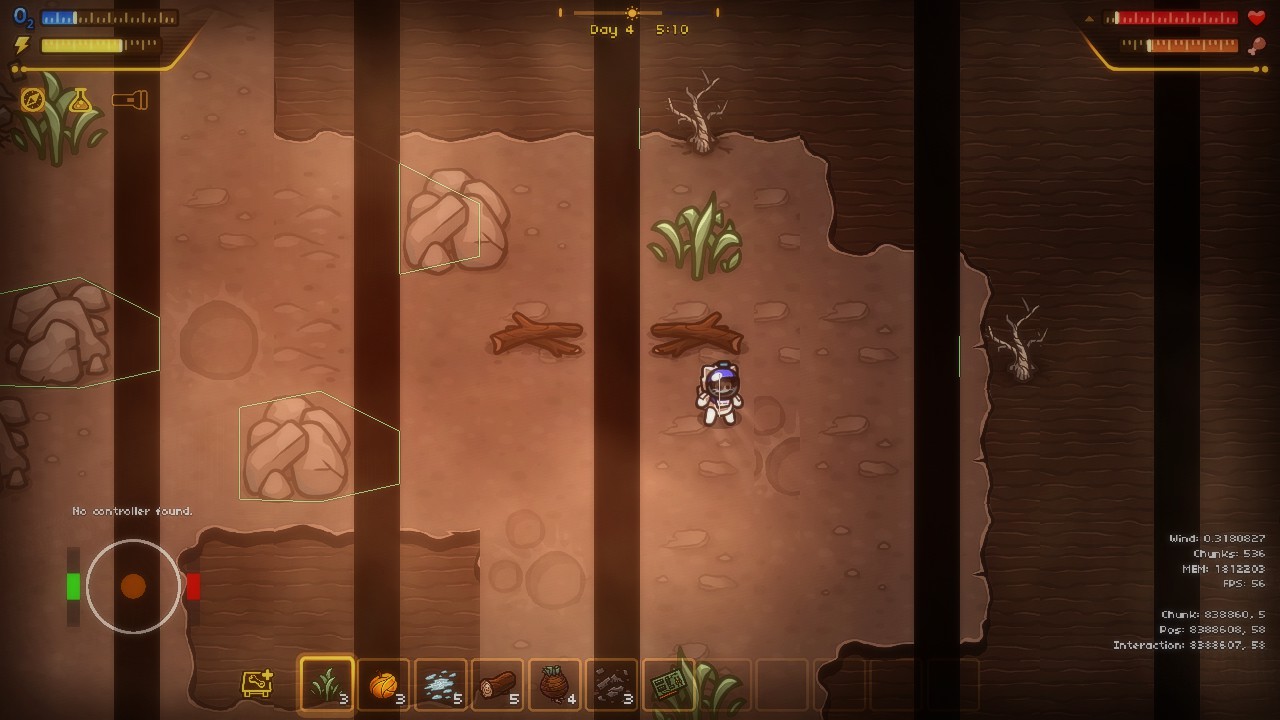 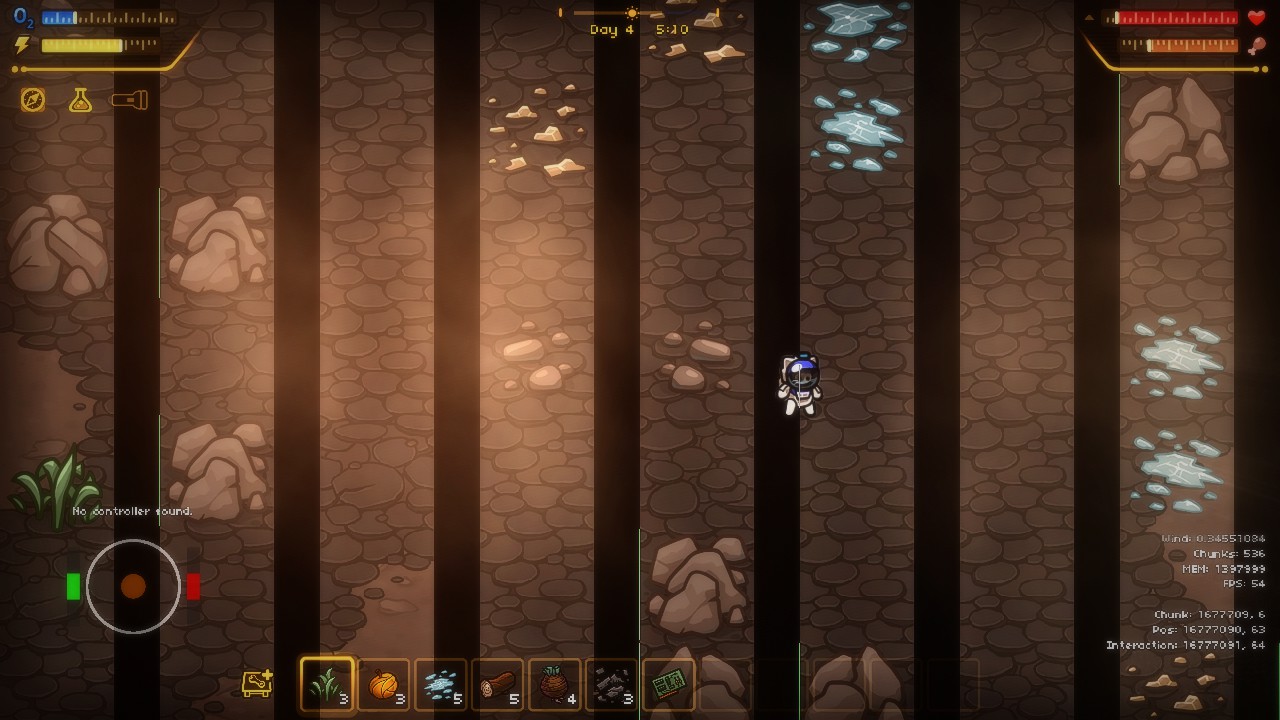 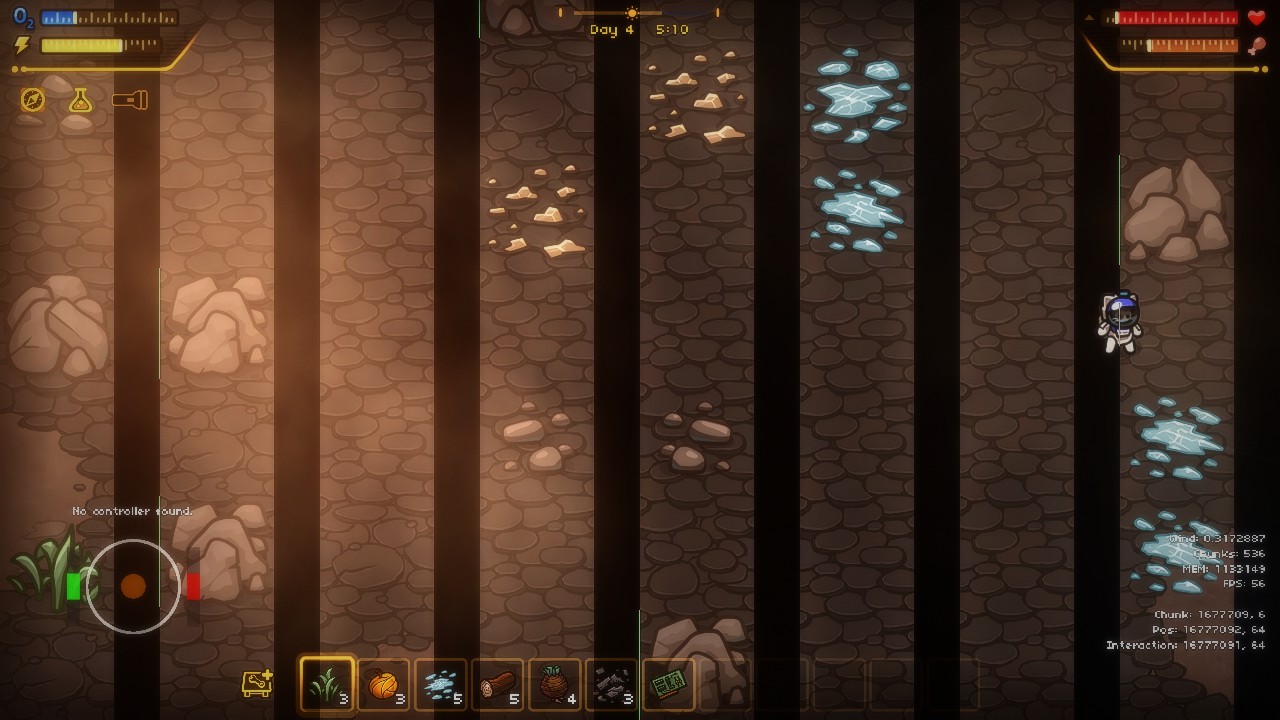 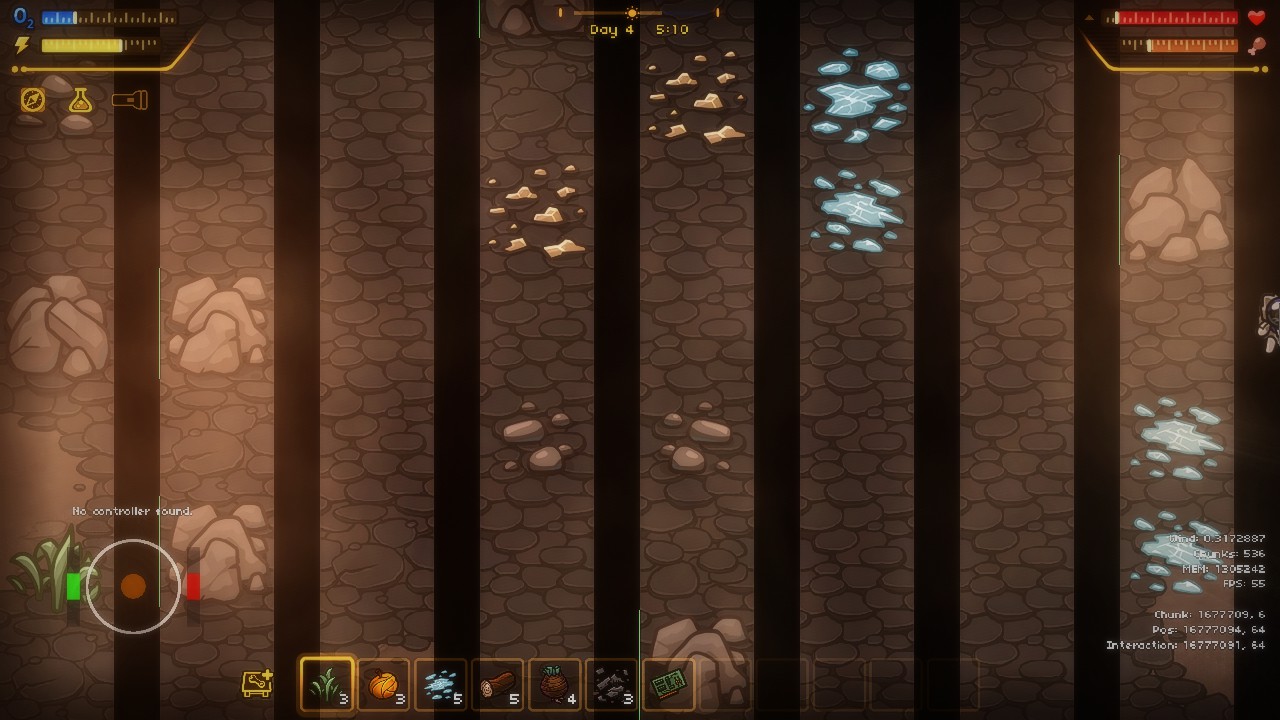 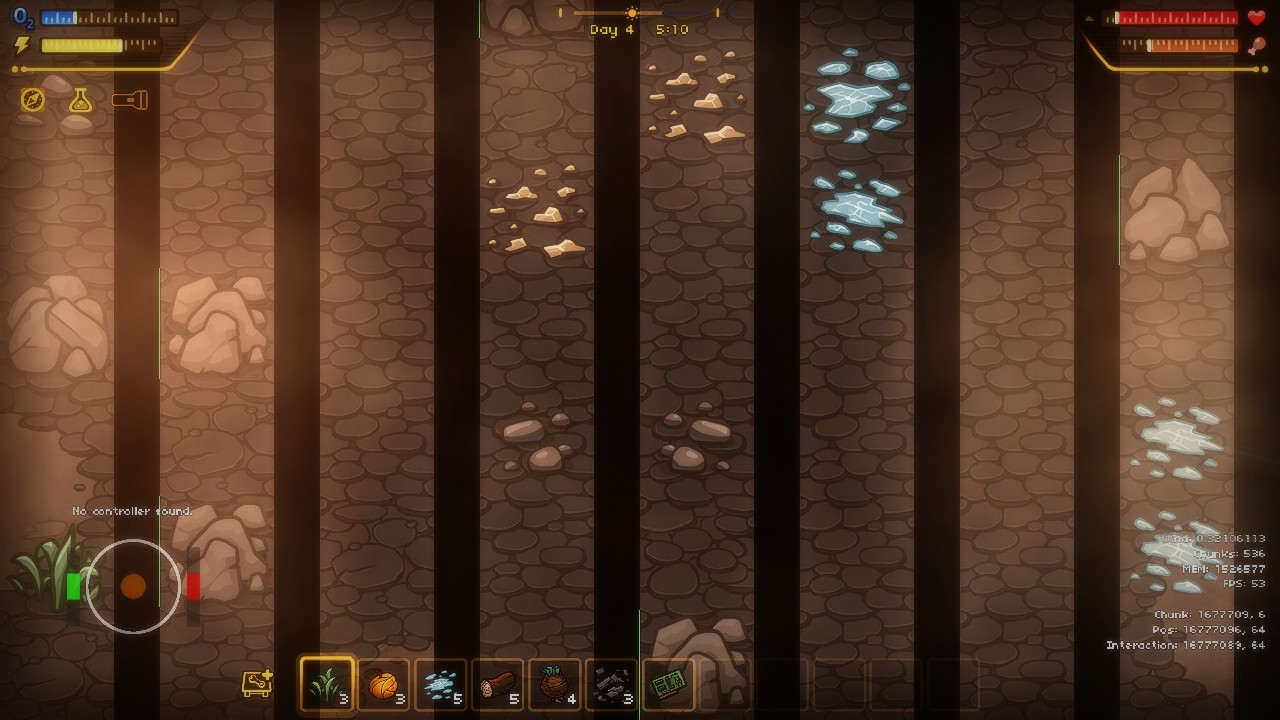 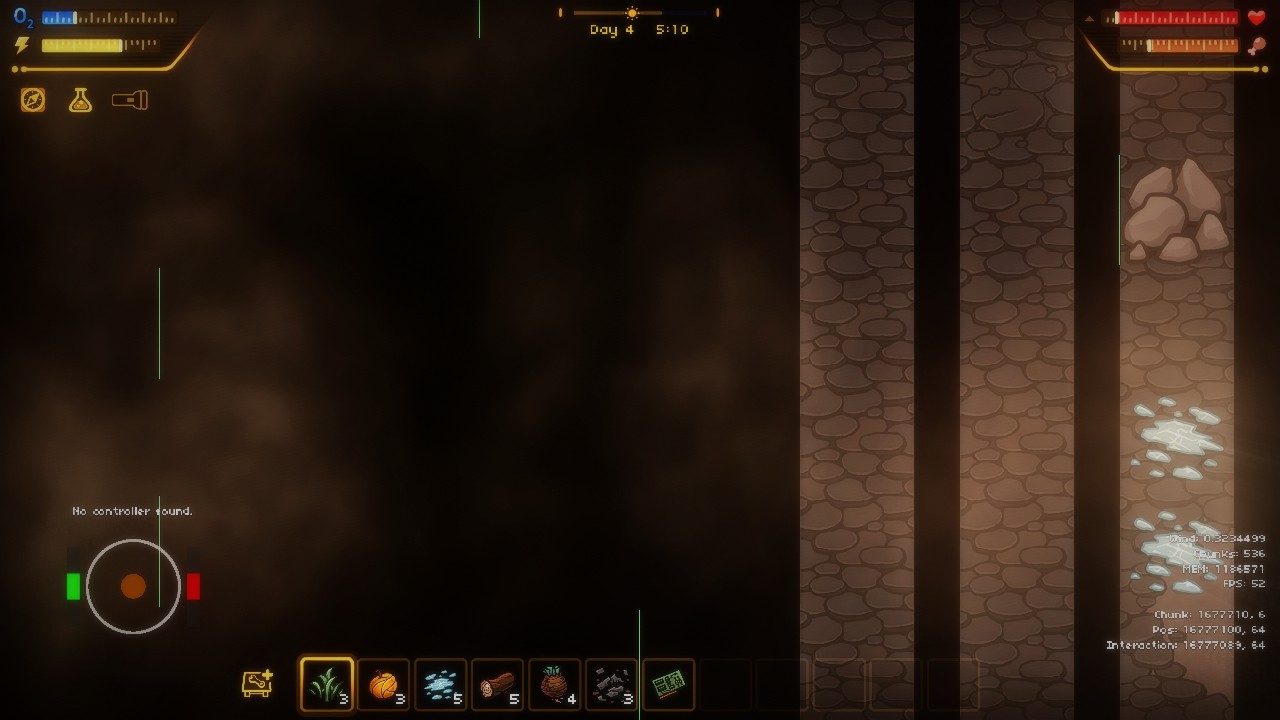 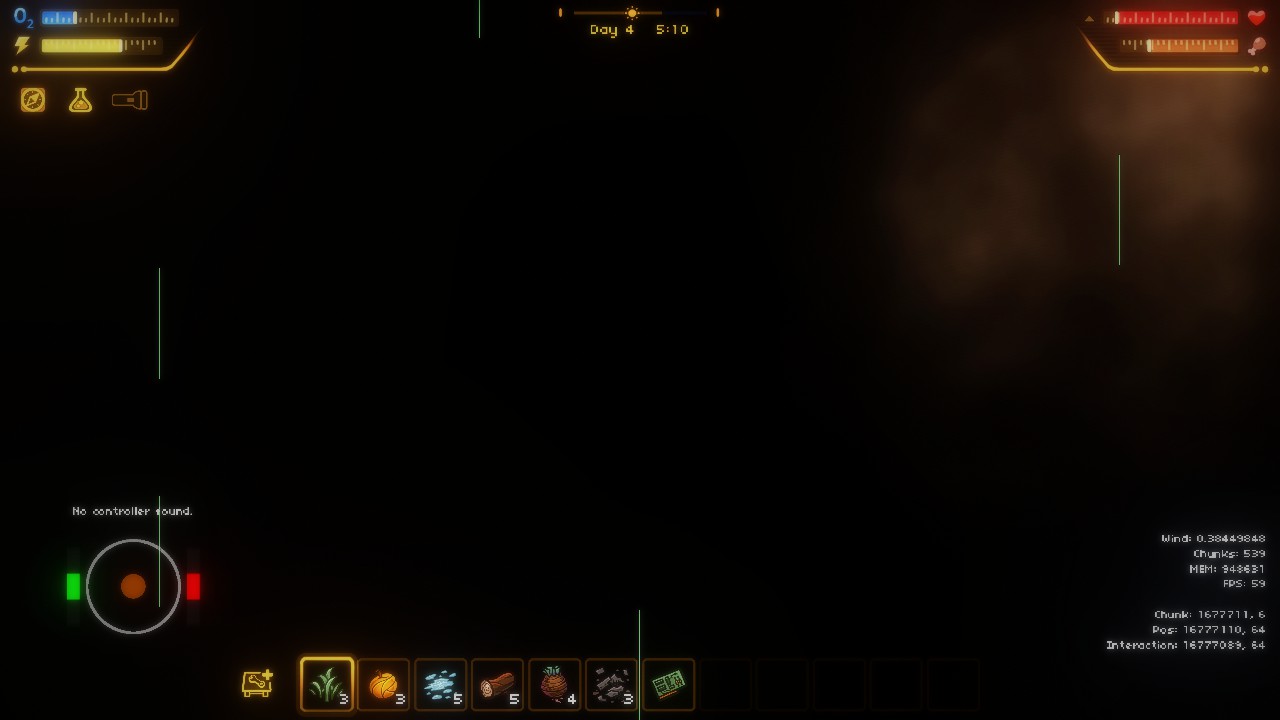 2^31 - the 32-bit signed integer limit: game lags so much your patience probably couldn't handle it.

From this point, you're unable to move further away with movePlayer command.

That's it. These are all the limits of MewnBase. 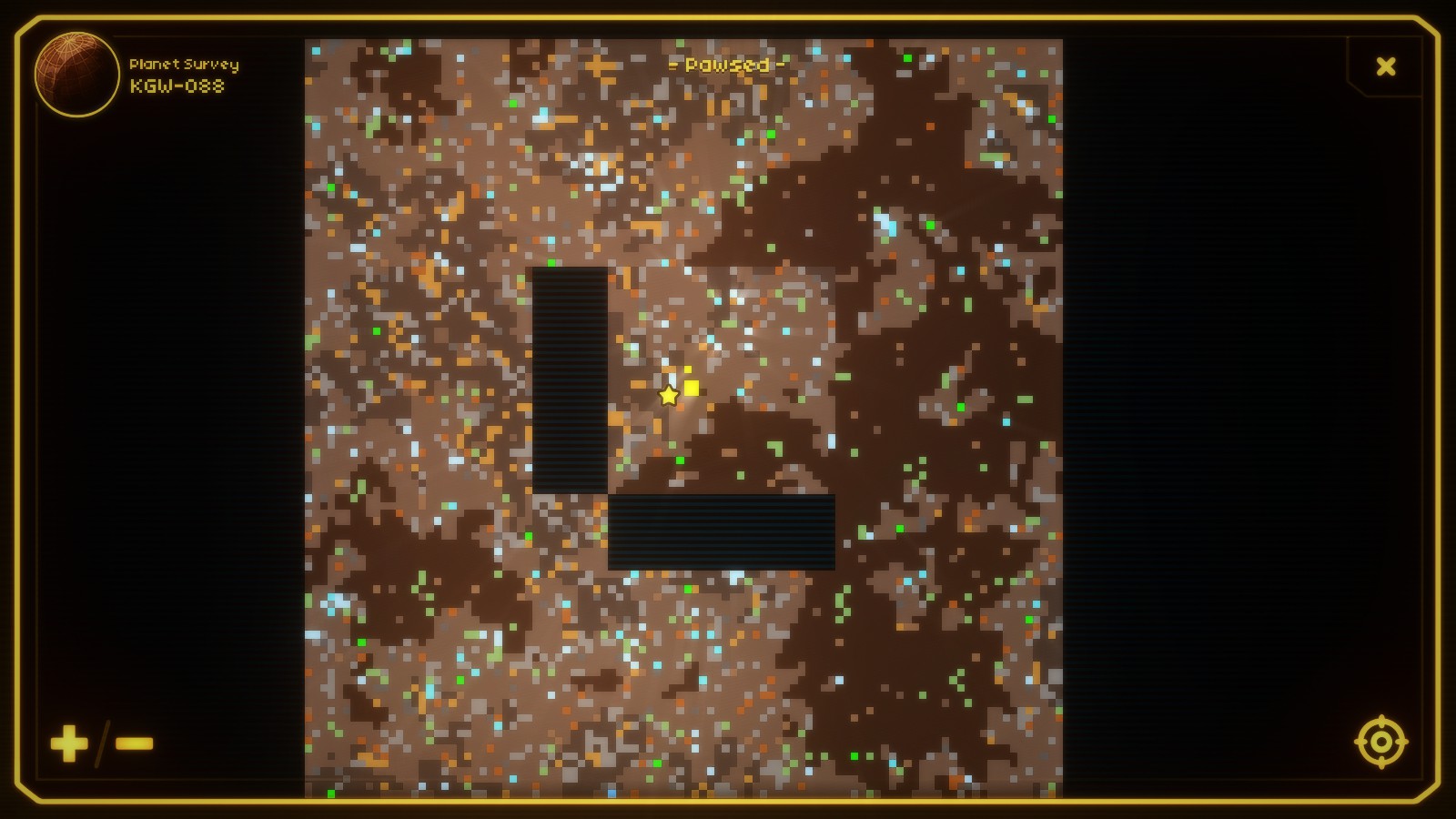 This is a map (revealMap 128 was used) of 1523 seed. Now can you see that something is wrong happening? Like, there are two black areas where revealMap gives up, and this: 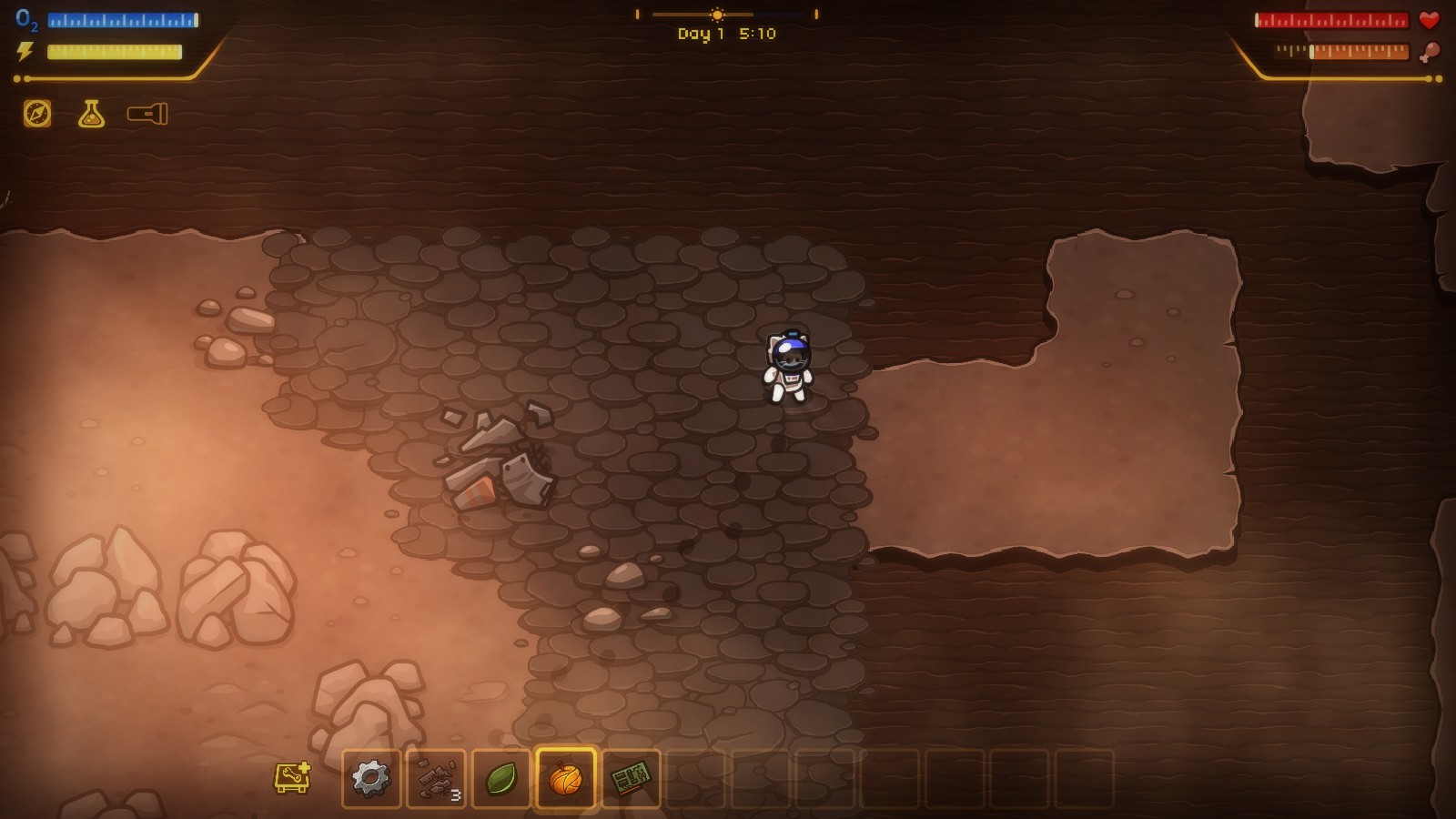 This area of world is located here: 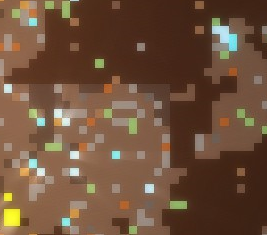 I can definetely see that something is going wrong.

Then, I created a world with the exact same seed. This world map greeted me: 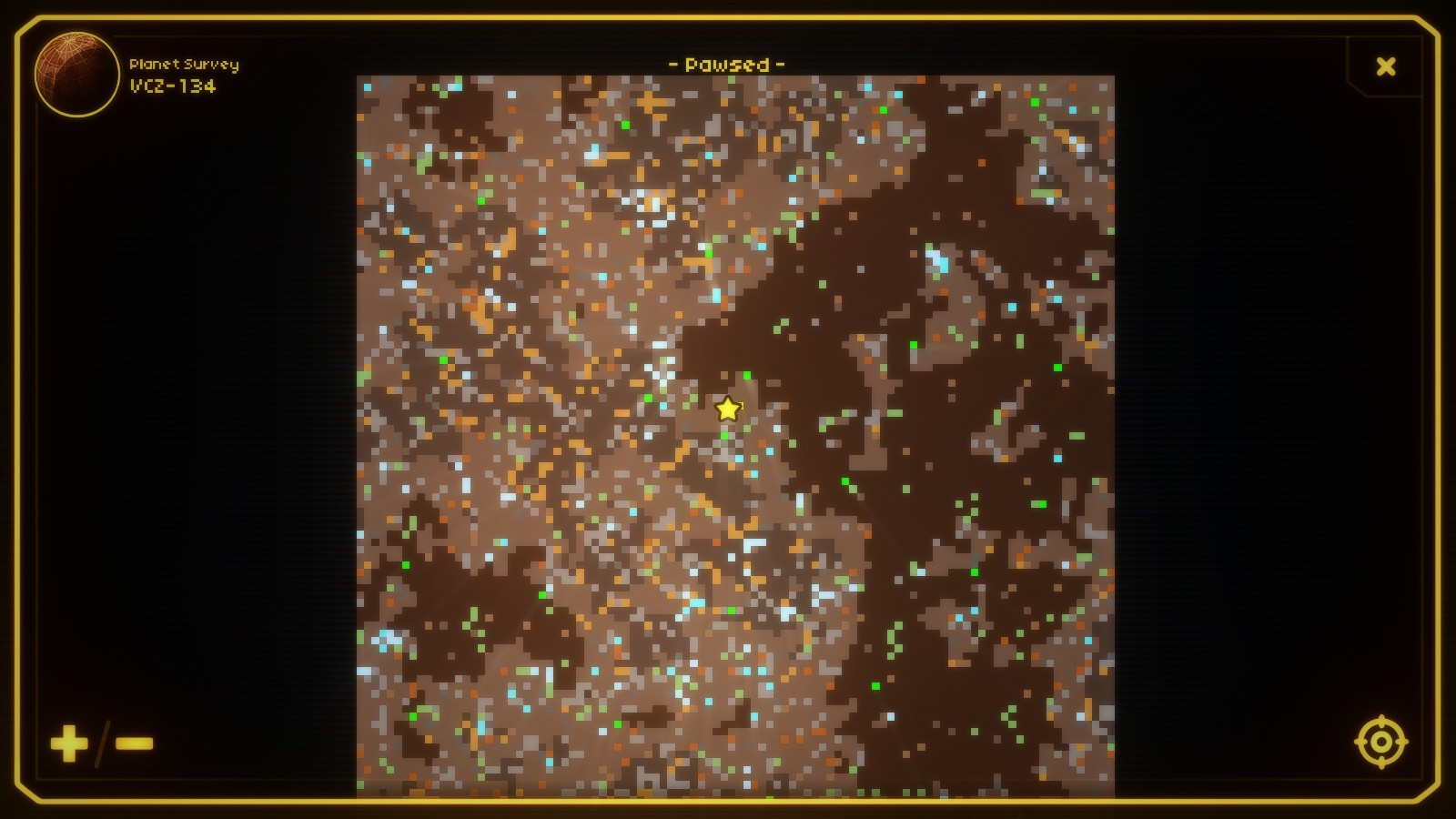 Now, the spawn region is completely different, and this time it really belongs to 1523 seed.

This means that the first world I ran was with the spawn region that isn't 1523.

Now, no matter how I tried to reproduce the bug, it was impossible for me.

Though this is still pretty weird.

Research points is a good reward indeed cuz the player researched an unknown something. I also just remembered about the future rockets: why not make some parts of the future rocket that are only obtainable there?

It seems that everyone who played the new 0.47 have witnessed the bug with sun icon at the left-bottom corner of the map. As I know,  Steve is already working with fix. The thing is: that gave me an idea of something to lie around in the world and when opening the map an icon with something will be where that thing is found. Maybe crashed probes with some nice stuff. To make an option to see icons on these things more reasonable you may add an option to acquire signals from debris (scrap metal or other crashed probes). There are plenty of scrap metal in the world, maybe make some to not just drop scrap metal themselves, electronics and components, but also signals (maybe broken and ready to be repaired in construction yard and decoded in research lab)? They also may have a special texture with something hiding below scrap.

Want to know how Steve looks at this idea.

Are you sure you're writing it right?

Updates won't affect your saves that much (i even want to say that they never affect your saves), except for updates that change game structure itself (like 0.42) - game would ask you to "fix" the save if it's old and need to be adapted to the new version of the game. Btw i think there is a generation problem (like in Minecraft) like you studied this part of terrain, updated the game, there added new biomes for example, you went into the unstudied places and boom! Suddenly, generation there is seems to be odd if compare to old generation.

Can you make that tiles won't appear in map if they are not in light? Because wandering around without flashlight turned on and studying terrain making "Only Night" time mode a way easier.

Can you also make map draggable? So there is no need to figuring out where is your base: is it on the left? on the up? on the bottom? on the right? of the crossroads: you can just drag it watch where is actually your base.

Reply
MewnBase community · Replied to Cairn4 in Pirate Mod 0.1 (Not a pirated version)
Delofon3 years ago

Thank you, Steve! That will make MewnBase modding grow.

Reply
MewnBase community · Replied to LordRedB in Pirate Mod 0.1 (Not a pirated version)
Delofon3 years ago 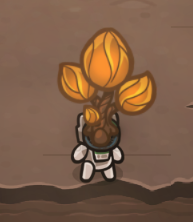 It's not that much take the coolness from the game, but looks kinda annoying.

Well, there must be smart people that would make it full. Btw i'm currently trying to make a modded RTG...  trying... there is no way to add a recipe in existing Workbench or Construction Yard, i think...

Hm, i just thought, what if someone will make a site with mods for MewnBase?

well, about drill can mine iron: you won't drill dust of iron in real, you will use shovel, don't you?

of course i know that a big part of your suggestions is nuclear, or if you about the game - lol, i played it, everything nuclear ore/fuel is need that is to build the RTG

what? how is it understandable: i wrote about planets, but you answered about nuclear things.

Also i forgot about one more bug: do you remember these messages saying that you picked up something? So when you are picking up, for example, 5 ice it shows "Picked 1 ice", but you picked 5.

About the "You win!" message: i had it, but i just loaded the save, i couldn't don't continue playing it, i just were got a far away in the walktrough, but, it's OK, i started endless mode and got everything i had and even better.

Cool ideas dude, but about planets: this is an unknown planet, which is so far away from our Sol Sys, so wtf Mars and Moon are doing there?

For some reason game stopped crash. Probably after "restarting the computer". Sorry for making this topic, but i won't delete it, if these unexpected crashes will appear i'll just reply.

When normal mission reaches 21 day (i think of that) game just crashes. Maximum day is 11, i just continued playing my normal mission after it "ended" (or, even this is a bug?). Can you fix it? +Bonus Bugs: