I love the story behind the dev! Those drawings are super cute.

It was a bit too punishing to start from the beggining at every mistake, I didn't have the patience to do all 18 levels. I found one bug : in the English version for the sentence "Both toasts are good" the word "Both" is already filled and therefore I didn't understand why it failed when i tried to write "are".

All in all it was fun to play

The idea is really cool! It's too bad that it's a bit less fun alone.
One suggestion: reduce the color stains' hitboxes, it felt a bit too punitive (e.g. sometimes I was barely touching the stain and I had to start all over), reducing the hitbox would make it a bit easier and more about the puzzles.

For a first game it's really great job !

Not the dev but I just played it and here's what I got.

Yes it seems to be tuned to AZERTY keyboards (which i know because it's the one we use in France). On windows you can switch to different keyboards but you might need to download it.

About the absorbing functionality it took me a while to understand: when 2 balls are in the same spot you can press "down" with both balls to merge into one ball with resulting color the mixed color. For instance blue + yellow = green, then you can pass green walls, then you can switch back to 2 separate balls

Me, a physics graduate: Welp, I guess I'm gonna change my field then

Jokes aside, very nice execution especially considering you used pico-8! Perhaps after the first wrong answer it would be nice to give the player the hint (e.g "the pythagorean's theorem states that a^2 + b^2 = c^2")

This was hilarious, great job

Hey! I agree that if taken as a pamphlet/essay this game isn't very convincing and appears as clumsy.

But I don't think it should be taken very seriously as I don't see how anyone would play this game and think "Damn right this is convincing", "logic? Hell yes that will show him". Every 'argument' presented against Trump here sumirizes with a couple words a complex real life issue that has many facets and ramifications.

At best it can be seen as a form of caricature, but then again, caricatures don't convince, they only make those who already agree agree more.

Personally I thought it was a hilarious way to show how Trump appeared to be untouchable, at least according to the media. Not claiming that he is though.

Finally, I get that things are tense in the USA right now and as an outsider from all this it's easier for me to laugh about it. I'm not blaming you to get carried into a rant over this as I probably have about issues i cared about

This was so cool, i loved it!
Congrats.

Thanks! Ah I see, it's good to know it makes some people sick.

I don't think it has potential for a full game, but I'm thinking it could be used as a hacking minigame within a bigger game

Quickly i got some OP gun making it impossible to kill me so I stopped after 15000 score, but that's okay imo

Sound effects were on my to-do list but I didn't have enough time unfortunately.  But you're right it's a good idea to make those pitch higher or lower depending on the what frequency the wave is

Don't worry, even though I designed it and made the levels I'm not always sure what I am doing :D

Fun game and it's a cute story about the little photon!

It's a nice game, I enjoyed it. It was just a tad repetitive. I'm not sure if it was doing it already but perhaps adding some acceleration (or making it faster), as well as making both enemies and the player fast could make the game more dynamic, just a suggestion!

Another suggestion: it would be neat to change the colors with the mouse wheel and having the ability to circle the colors in both ways (Violet -> red and red->violet)

It looked and worked well! You've got a nice base to expand it into a longer and more challenging game

It looks and sounds amazing! Adding some trigger effects like multiple balls could be fun, it could turn into a real disco club real fast :D

It was a cool concept to make a game around those laser filled rooms, it did feel like that at some moments. With a little more design and timing you could get some neat laser escaping effects

Cool concept that could be pushed further for some nice puzzles.

Fun little runner. I liked how it got more difficult toward the exit and also how fast paced it got (but that might just be my playstyle)

Thank you! I'm glad you liked it!

If you'd like the game to be longer it's actually very easy to build more levels, I didn't do more because I didn't want it to  be too repetitive.

Here you go, the compiled game with 7 additional levels. I haven't play-tested them too much but I'm sure they are fine. The 14th and last level is generated randomly!
To get the game working, simply unpack the .zip and open the .html file with any browser, it should work.

Haha yeah, the lack of tutorial or anything can be off putting

Beautifully executed game!
The networking is really neat and the game is fun to play

There is potential here!

It seems you had the mechanics in place but lacked time to flesh out the content.

I'll try out the latest version when you upload it (after the votes I'm guessing). I'm curious about what you had in store.

WHO IS DOING THIS

Fun game! Very fast paced with so much going, I liked it.

Personally I wasn't good enough to see all the levels so I think it would have benefited from having a checkpoint system.

I love the concept! There's potential to build more levels. Figuring out how to execute different actions in the right order turned gave some puzzle aspects to the platformer.

I was a bit confused at first but quickly got into it. I love the battle game and the enemies design.

Thank you! Actually the difficulty curve a generated randomly from a set of predefined tiles (some tiles are easier and some are harder) so nothing guarantees a neat difficulty curve. But the stochasticity implies having a bit of all kinds of difficulties

I'm glad you enjoyed it and that the rules were clear! 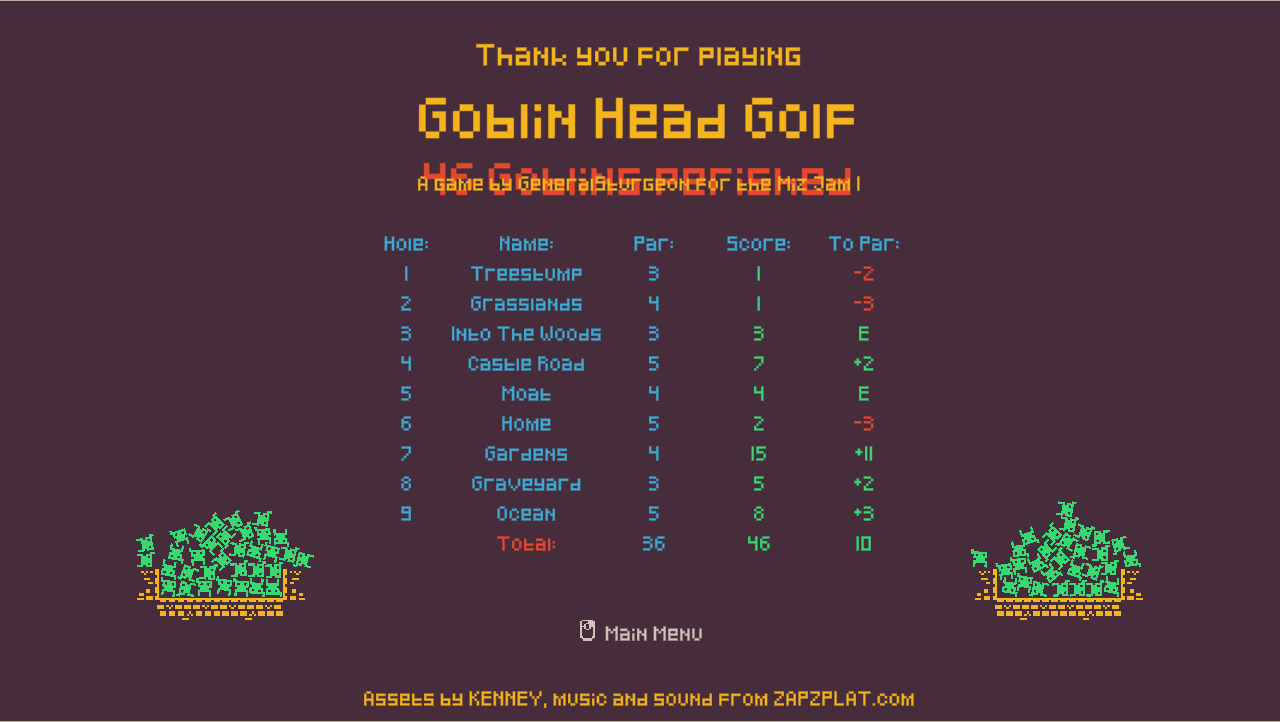 Really nice game! The pars are really hard to achieve though. My personal best is 46, 10 to the total par

It means take the source code and execute it directly which is framework independant. It's explained how to do in the readme file : https://github.com/HackerPoet/MarbleMarcher

Okay so I had two ideas this morning

1 : a circular brick breaker game where your ball has to escape from the center by breaking a layer of bricks laying in circle

2 : a game where you have send your spaceship to space and escape earth's gravitation

I still don't know which i will do