I'm glad you enjoyed it. I did want to do stuff with the room shifting and changing. But I only found time to make something in the last 5 hours of the jam while traveling. So, I'm quite happy with how it came out despite my limited resources.

Thanks for the information, and I just wanted to let you know I managed to be a game in the end :) 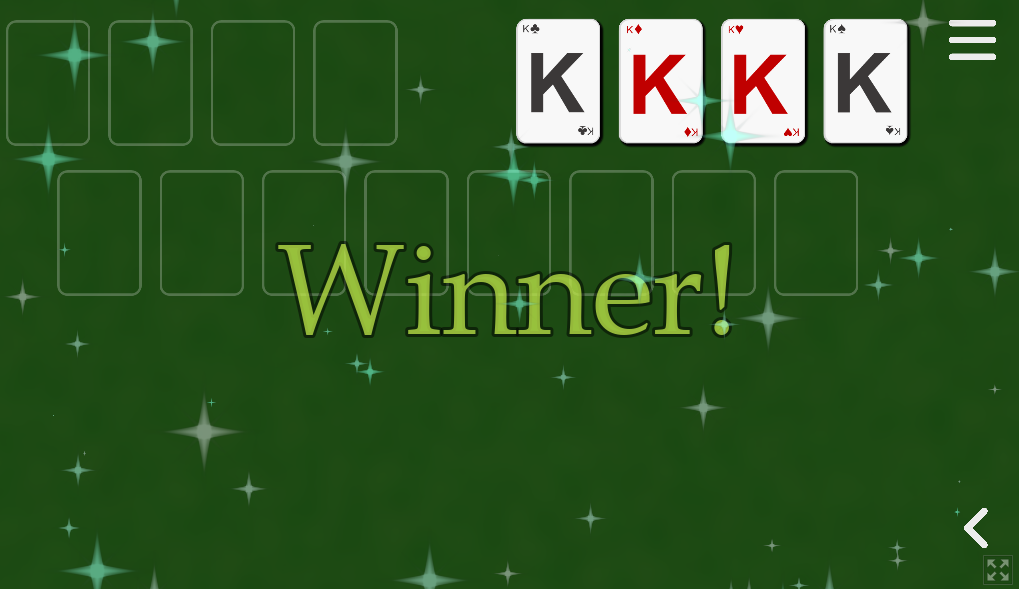 Is this game using some rule set I'm not familiar with? or am I playing solitaire wrong? Moving 10H > 9S > 8H to JC is treated as an illegal move. 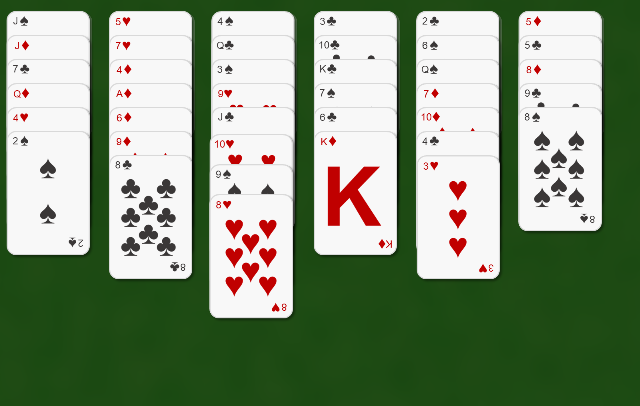 Yeah, I accidentally left in

from when I was debugging. So... it kind only shows the one event.

A nice little platform. Despite not having much to do, it controlled rather nicely.

Pretty fun, but pressing L really does make you taken an L

Whoops, forgot to include a link in the description. It's in the jam page and now this comment:
https://gitlab.com/Capital-EX/nothing-in-between

It's an interesting concept, but I feel like the usage of a fixed perspective isn't as strong as it can be. The angle I'm looking at should tie into the game mechanics somehow. Additionally, Some jumps felt far too technical to figure out with the camera restrictions. For example, level 3 required me to enter the blue portal and hit the green. But, I didn't have a way to easily see myself and the portals. Therefor, it felt less like puzzle solving and more like guesswork.  I do like the usage of a fixed camera to construct spacial puzzles. However, I think the type of puzzle need some refinement and iterating on.

I'm having trouble using the music editor. The instruction manual doesn't list an input for interacting with the editor. And, nothing I press has any kind of feedback. So, I'm not sure how to use it?

I managed to get them all. The last coin I got was a hell of puzzle to get to. I thought it was impossible, but I guess figuring out how to solve it fits the message in that area. Very well-made.

Thank ya! There are quite a few refinements I want to make later. I'm certainly going to give this game some post jam love.

Interesting prototype/proof of concept, but it's a little dizzying to play for long. I think having a background that indicates spinning would be easier on the eyes and brain. Good effort, though.

A very delightful game you two have made.  The art, visuals, music, and writing were good. And, the puzzle solving for me was just right.  The little fade away with just the object left behind reminded me of the old educational kids games I used to play. Very good job!

Very solid game, I just wish there was a bit more challenge. However, the transition into the rock star mode was always satisfying. Very good game all round.

Edit: I went back and replayed the original Paint Rider. You've improved at lot since then, and I look forward to seeing you next jam.

I liked flying around the map looking for the hidden treasure.  But, I think a bit of feedback needs to be added when I try to open the chest without the key. However, good work making a small adventure!

The graphics were good, and I liked the combat system. However, I feel the controls for the player need to be tighter.  The enemies were able to easily out maneuver me. But, overall a nice prototype with tense air-to-air combat.

I like the idea of manipulating a vector field to control the motion of an object, but I think it's a bit too hard to predict how the flower will move. Additionally, the gaps you need to clear need fine grain moves that just weren't available. However, there is a solid idea here.  Also, I think it's worth considering it as a mobile game, too.

This definite gets a 5/5 for being the strangest entry. I liked the creative usage of the theme. The music definitely help set the mood for the game. Also, I love the concept art you included on the git repo.

At first, I thought the game was impossible, but then I warped around the edge of the screen.   After I understood how to play, I found the game quite addicting.

I wish there was a bit more story to the game. I'm not sure what I was meant to understand. Also, I think tightening up the collisions would be a big plus.  However, I really enjoy the idea of exploring a mysterious set of floating islands.

Unrelated to the game, I can't seem to get the tile map editor to run on Windows 10.

Very nice game, it had almost everything. The only thing that felt missing was a proper ending.  I actually found a spot where the feathers couldn't push you around and left the game idle. Never found an end, but I did get over 15000m tho.

Thank you! I sadly didn't have time to tune the difficulty or make the difficulty progress. (Also, web builds are hit-and-miss. This one seems to stay on a black screen for a while before running).

While the game was largely luck based, I felt got enough of a feel for the it to finesse my throws to improve my odds. At first, I thought I saw everything, but then I got past 1200m for the first time. That really hooked me in and I ended up getting to 2190m. I really love these long throw games. So, this is an around solid game for me. The music choice was also a good fit for the game. If you all ever think of continuing this project, adding power-ups and upgrades would definitely be the way to go.

Thank you! I originally wanted the spike Angel to block your path, but with time running out I gave all the angels the same script.

Also, I have to thank my friend with helping the theming. Their small OST really tie everything together.

Oh, I might have not noticed it because I use F.lux to help sleep. It wrecks my ability to distinguish colors on my screen.

It's also possible that the 2020 Jam caught some people by surprise. The jam's start data has been slowly creeping up the year. Additionally, it's likely people are trying to use new tools to score extra points. Using an open source engine adds 3 extra points to your end score. Also, 2020 is just a hectic year.

Thank you! I'm glad you liked the art and music! I wanted the ability to shoot where I clicked, but I also didn't want it to be instantaneous. It is definitely something that needs an in-game demonstration.

Got the game running after fixing my own error.  I have to say it was a quite relaxing experience collecting butterflies.  Also, the butterfly generation made a variety of interesting creations.  Additionally, the music complemented the mood of the game nicely.

Oop, that was an "In Between My Ears Issue". I commented out the print statements trying to make it run in python3, but I completely forgot I made those changes. Sorry about that.

I seem to get an error on Windows 10 with the message:

I think there is a solid core game here.  A few things that I think would help improve it would be a more stable camera. Sometimes I would smack a wall and become completely disoriented. Additionally, I think the cursor need some way to indicate the surface is to far away. I definitely look forward to seeing this fleshed out more!

Thank you! I'm glad to see I'm build a bit of visual style to my games! Also, I was getting a little worry that my tell was broken from the other feedback. But, rebalancing the gun is definitely on my radar. Thank you again for your feedback.

I played for a couple of rounds and managed to get a score of 99.  Tho, I couldn't decipher what was leading me to success. I might have taken a look the source code to understand what was actually going on.

Despite not being able to stop shooting, I think the game was still pretty fun. I had to use dimension switching to recharge my shots. I think making it recharge faster would definitely help make the gameplay better. Also, the homing enemies were a bit too difficult to avoid.

Thank you! I really love the music Clue made. It ties the whole thing together nicely!

I liked the idea of base building and exploring a surreal post-apocalypse. However, the controls on keyboard were a bit tough to use. But, the controls for controller were much better.  Also, the music didn't fit the game very well.  It was good, but it didn't help build a cohesive mood. However, I think it is a pretty good prototype for a surreal exploration game.

Very fun little game.  I think adding sound and some things to avoid would definitely help make it a more complete experience.  Also, I really liked that the player's moment would sync with the clouds. Made controlling the player very nice.

Thank ya, I unfortunately didn't have time for the introduction pattern.  And, I forgot to add an Angel death sound effect.  They have a short particle effect, but nothing auditory. Also, the Angel that is going to attack you starts pulsing red and moves to the center of the screen. When, it pulls back you'll need to move.  But, they are a little too fast.

Thank you!  I didn't have the time to fine tune the difficulty enough. However, I can offer some tips:

I say "should" because it's possible that those cues are glitching out (lag or programmer error or both!). But also, the Angels are a little to fast.  Additionally, the Ring Pattern is accidentally harder than it should be. When fewer Angels attack you, the delay between attacks becomes shorter. However, the Ring Pattern always sends one Angel to attack. Which means, the Angels can send a continuous stream of attacks at you. So, if you see the Ring of Angels, just don't stop moving and shooting.