I played this demo on a Windows 10 laptop with trackpad and keyboard.

Most satisfying level to beat: 1-4.

Since I wasn't familiar with the mechanic, it took me a while to figure out how to open a door. I thought I was aiming close enough for the magnet to "catch" the field of the chute, or that there was some other trick like jumping or pressing an interaction button, until I realized you have to stand directly under it and throw the magnet directly up. This was tricky with my trackpad. I did not like opening doors. I also found the hub to be clunky.

The low-sensitivity mode helped with my aiming issues but did not fully alleviate them: sometimes the trackpad would completely lock up while aiming.
I thought the aim toggle might help as well, but is there something I'm missing about it or does the toggle not allow precision aiming? All the throws seem equally weak when it's on (I couldn't start a level with it because I couldn't throw the magnet into the chute) and I don't feel like I can aim correctly.
Another commenter said they wish throwing worked like Angry Birds, which I would also like, but mostly I wish I could control the entire game with keyboard alone.

I was a little disappointed to find out that throwing the magnet into the chute in normal levels does not return you to the hub.

Sometimes I'd get separated from my magnet when it locked onto something and I was trying to go with it (usually the angle doors), which was jarring.

I was confused by the keybindings not mentioning that the arrow keys are also assigned to motion, as my movement preference is arrows over WASD. Also, for reference, a common Windows accessibility setting is to make a circle around the cursor when pressing Ctrl. If pressed repeatedly, it darkens the entire screen except the cursor. This happened to me a lot trying to reset before I messed with the keybindings, as I didn't understand why pressing Ctrl once wasn't working.

For further a11y options, may I suggest a higher contrast/reduced motion mode? I honestly skipped the last level because it was dizzying to look at and I couldn't follow what was going on.

Reply
🚀 comments · Replied to dibit in 🚀 comments
aliengeometries1 year ago

Oh no, how odd! If you want to see the rest of it, the random seed is based on the date and time you start a playthrough, so if you hit restart, that may appease the pantheon.

I'll keep in mind for future projects that a "bad luck bonus" may be useful, to prevent the seed messing with someone's experience like that.

Reply
🚀 comments · Replied to Elisabetta in 🚀 comments
aliengeometries1 year ago

I don't plan to update the game at this time—my challenge to myself was to make something quickly and call it done—but thank you for your feedback.

Reply
🚀 comments · Replied to GraceHowell in 🚀 comments
aliengeometries1 year ago

Thank you for this! Not that you have to do all of these if you don't want, but I'd definitely be interested in seeing more about:

Maybe something like scrollbars and sliders, too? There are a lot of different things you can do with those.

Sorry, is the pack released under CC0 as you say on itch, or the more restrictive license ("You may NOT redistribute the resources themselves, or derivatives thereof - neither for free, paid or otherwise. You may NOT transfer this license, or issue sub-licenses for the usage of the resources (or derivatives thereof) by third parties.") found in the zip download? CC0 doesn't restrict usage at all, so the two licenses conflict.

Hi, what is the license for these assets?

Hi, I'm developing a game in Ren'Py, which requires that all font files be placed in the game folder in a way that a player could easily extract. Would this be an acceptable use of your fonts, and if so, would there be a commercial use restriction?

Interesting premise! I like the granularity of character customization and the phone interface. The few uses of color really pop against the grayscale.

I got this right before I went on vacation; what a nice way to start it off. :)

I'm considering doing more with these characters; be sure to spread the word if you liked it!

IT'S POSTED. It's missing a good deal of content. But it is up there. Little victories.

Well, in a very convenient turn of events, after losing most of the time to sick days, my scanner is broken. There goes my "all physical assets" plan. I'll type up what I have for the rules as a .TXT and upload that. Again, I will be finishing this, just not in the span of the game jam.

So I was sick, as said previously. I then spent a good part of yesterday recovering from some UNRELATED stuff, whoops, but GUESS WHO FINALLY GOT SOME WORK DONE AGAIN THIS MORNING. (Me.)

I've written up part of a draft of the rulebook (very final, I know). But hey, it's something! Now I have things written down that I did not previously.

It's looking like what I publish for the jam is going to be incomplete, and if that's the case, I will be updating it after the jam ends to get it into a playable (or, dare I dream, polished) state. Y'all can follow me or add In Memoriam to a collection once it's up if you want to see my after-jam edits; I might announce it on the Discord as well.

Thanks! I don't know how much of this I'm going to be able to do by the deadline since I lost several days, but I like what I've got so far!

Welp, being sick got to me more than I thought it was going to; I've spent a lot of time on the couch, not so much working on the game. Hopefully tomorrow I'll be feeling better.

Reply
My First Game Jam: Winter 2018 community · Replied to Beetlebelle in [Dev Log] The Crow and the Crown
aliengeometries4 years ago

I feel ya, gravity is a pain. Good place to start, though! 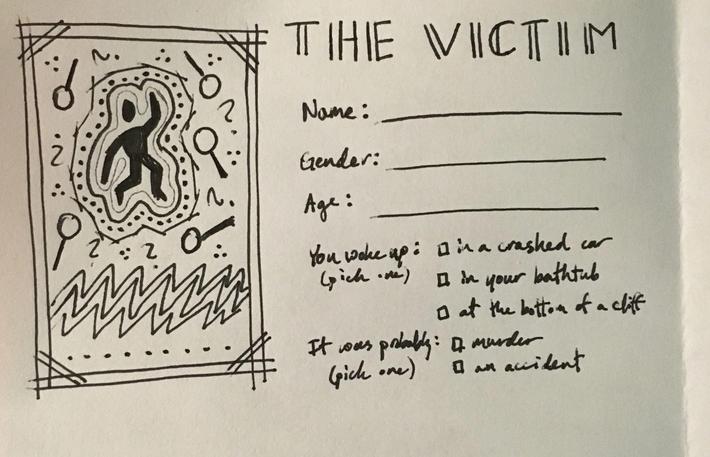 This is most of what I got done today; I'm still sick. But it's something!

Reply
My First Game Jam: Winter 2018 community · Replied to Kenna May in Devlog: In Memoriam
aliengeometries4 years ago

Some PbtA games do and some don't, so it's a good question! GM PbtA works pretty much how you'd think, generally, but I'll be doing GMless. Avery Alder has some good (free!) examples of GMless PbtA in the form of Perfect, Unrevised and Dream Askew. (The PDFs credit her by a different name; she's since changed it.)

The Law players from PU and the Psychic Maelstrom/Society Intact/etc from DA resemble the Lost Love/Memento/etc I have in mind.

Note that these games are not exactly like mine is going to be, lol!

I drew a little and organized my Trello. That's about it. I've been sick.

This sounds really original! It'll be interesting to see how this turns out!

Nice! I like the alien design and the various sweets.

Interesting! I'm not totally sure what the gameplay involves, but it sounds unique.

Reply
My First Game Jam: Winter 2018 community · Posted in [Dev Log] this is the end.
aliengeometries4 years ago

The color palette thing sounds like a good idea for clarity.

Omg, this is hilarious!

Aw, this is so cute! I look forward to playing it!

No pictures today; I woke up exhausted and most of the work I get done before bed will probably be doodling art assets later.

To make something clear, when I talk about "winning" in this game, it's mostly shorthand? I mean, in the "competitive" version of the game, 3/4 of the players are going to "win" equally. I mean, they achieve the condition that removes their character from the game in a positive way story-wise... but that's a bit unwieldy. I want "losing" to be less about competition and more about character development. Being a ghost is hard, and it's not always happy.

In the meantime, more about the side roles:

I am not a game designer (if that wasn't immediately obvious), so questions, feedback, and whatnot are appreciated.

Hey, if you do one, I won't think you're copying! :P It's mentioned in the FAQ, I believe.

...and yeah, it'll be interesting to see how I balance the systems for me, too.

Everyone but one person wins! In theory. It might end up being coop or having a coop mode.

Aw, y'all are sweet.

Today I got some of the basics down for the character sheet -- I'm using playbooks, but this is only intended to be a single-session game, so the term doesn't feel like it fits when they're just half a page.

The final version will be in pen, but pencil works for now.

Stats I have in mind (may be renamed):

My thought is that there will be four playbooks for the jam version, differentiated by their dying wish (again, may be renamed):

Now, these goals don't have much in common with each other. How is anyone supposed to progress?

Here's how: everyone also plays a side role for another player, and those interactions facilitate progress. There may also be opportunities to progress by interacting with other ghosts; who's to say at this point.

Nice! It seems like you've got some clear goals for your game. I can't wait to see how it turns out!

Neat! Is it going to be kinetic or have multiple endings (or is it too early to say)?