My simple game entry to the ZX Spectrum Game Jam
Submitted by Muscles (@BarrettOtte44) — 5 days, 7 hours before the deadline
Add to collection 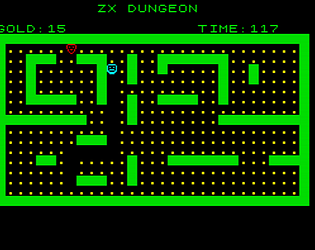 I liked this one.  The timer only descending when you are not popping pills means the game becomes about path planning to avoid doubling back.  Good work, and quite 'just one more go' y.  Good work.

I'll second the people who noted odd key choice (it's hardly a FPS, so WASD seems odd... as a right hander that's a quite strange choice to make - play with left hand, or play with Right Hand over on the left of keyboard.

A Pac-Man clone with a unique twist! I like this one! Also, love the little tune at the start :)

Submitted
The Dungeon of Bhalgora
LikeReply
Jupiter_Hadley3 years ago

Really fun game! I included it in my ZX Specturum Basic Jam compilation video series, if you’d like to take a look :)

Good stuff! I am using IN ports to check for keymap presses to allow multi-key use for better control responsiveness.

I am using QAOP too, as they reside on different ports which means they won't conflict with each other.

Submitted
Attribute Smash!
LikeReply
No Time To PlaySubmitted3 years ago

Not bad! This game moves better than other real-time entries I've seen in the jam, but still suffers from similar problems, mainly unresponsive controls. If the bad guy was actively coming after me instead of moving at random, I wouldn't stand a chance. Turn-based would be better given the limitations. And more Speccy-like directional keys, such as QAOP or 5-6-7-8, would be appropriate. Speaking of which, testing for character codes 8, 10, 11 and 9 respectively would allow players to just use the good old cursor keys. Still, a good start!

Submitted
Lost in the Jungle
LikeReply