A minimal, but playable, Snake-a-like in ZX Spectrum BASIC
Submitted by uglifruit — 1 day, 9 hours before the deadline
Add to collection 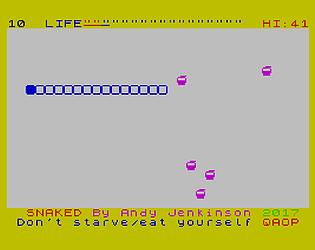 A nice, fast, snake implementation; great fun. It's frustrating, but I loved the hunger mechanic. Not sure if it's due to distraction, but certainly not got as good as 69 yet. Good tip about the menu too; perhaps it's the green, but I kind of lost it on the screen. It makes me want to try my hand at making my own snake clone.

Thanks for comments.  This definitely still has a bug that can occasionally print a (magenta food) that doesn't count, and you can't progress.  And it IS too hard - I've been playing it again today (on 200% speed on emulator it feels quite responsive), but I can't get close to my personal best.  I think when making it I tweaked it to be as challenging as I could just-about not cope with, which is where I think arcade games should be.  But at that point I'd been practicing, now - after not playing for a few days with dulled reflexes it's frustratingly difficult.

And thank you - the 'hunger' (and graphical representation of it) was the thing I was most proud of here.  I don't *think* I've seen that in a snake game before.

No problem. I agree about difficulty - it's no fun without a challenge. With writing it's best to edit after leaving it a while; I guess it's the same with games. Though games are partly about mastery through practice, so it's a fine line. And you're right to be proud of the hunger mechanic, it's good.

Thanks - Pro Tip: On the menu screen press 1 / 2 to make the game easier, and have a go like that before playing on the default (very hard ) setting.

Simple but nice version of snake! I included it in my ZX Specturum Basic Jam compilation video series, if you’d like to take a look :)

LikeReply
No Time To PlaySubmitted3 years ago

Not bad! This is fast, even too fast considering a Basic game can't respond to keys quickly enough, and the screen wrapping around is a neat variation. But the aforementioned problem makes it all too easy to miss fruit, and as that kills you by starvation very quickly, the game ends up being rather on the hard side. YMMV.

Submitted
Lost in the Jungle
LikeReply