When you're camping, sticks are abundant and surprisingly useful!
Submitted by PicoPlanetDev (@PicoPlanetDev) — 1 day, 1 hour before the deadline
Add to collection 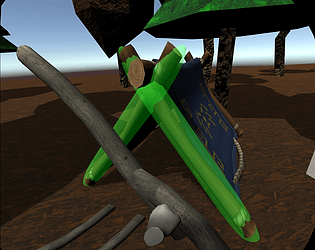 Man with all those sticks you can build many things, Great Job.

If you have some free time, please check my game.

Great use of the theme! I was impressed by the number of uses sticks actually have in a survival setting :D.

The "green markers" for placing wood were nice on the tent! But it would have been a nice touch if you created different shaped ones for the other things too :)

It would have been super cool if you actually had an animated bear slowly closing in on you during the last bit! Or more timed events (to put pressure on the players :D)

Overall, nice idea! if you carry on dev after the jam, i'm sure this could turn into a pretty relaxing nature / survival based game :)

Enjoy the building aspect, and use of the theme!

I couldn't run it on HTC Vive. I tried the VRJam2020-StickItTogether-03-Rift.zip.

Really good start of a survival game, hope you develop it further past the Jam. We need more survival stuff on Quest. Congrats!

Thanks! I will consider it.

LikeReply
Field Of VisionSubmitted23 days ago(+1)

Nice one. Check my submission out when you have the time too! :)

Gameplay: Woods are so nice to play in. I love survival games for that
Fun: Build my own tent is always fun, like in childhood
originality: dont know what to say about that
graphics: low poly is best!
theme: I love survival games like rust, nice!
overall: Cool game, are you developing it further?

While you are here I've played yours, so please check my game out in the button below.

Thanks for the praise and good breakdown of your rating! I'll rate yours, too!

Thanks! Hopefully with good points. If you wanna see anything improved, please tell me :)

Great use of the theme, sticks are nature's multitool!

Thanks for the praise! I felt like designing a simple outdoors scene seeing as we are pretty much stick in our houses right now and I came up with that. Short and sweet!