Twin-stick shooter set in a dungeon crawling with vampires
Submitted by rocketnine — 1 hour, 41 seconds before the deadline
Add to collection 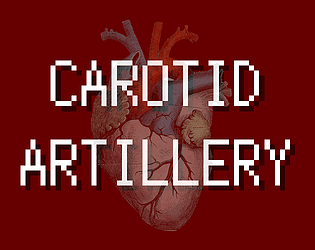 How did you choose to implement the Theme: Vampire in your game?
You are trapped in a dungeon crawling with vampires dying to have you for dinner. Ward off demons by eating more garlic in one night than you've eaten in your entire life.

The gameplay is genuinely nice, I like how garlic repels the vampires (very creative lol). At some point a lot of vampires came at me real fast and there was no garlic nearby, but I learned that shooting at them while at the same time moving away from them works best. Sound effects were on point too. What stood out the most is how you implemented the vampire theme, nailed every detail. Good job! 10/10 will play again :)

The gameplay is pretty fun, I like that you can shoot a lot and watch the enemies get hit in one hit. The sound effects and being able to see the bullets and fire also added a lot to this.

I think to make the game feel less repetitive I would maybe only have one enemy in the first level, and add the second later, or add another one (a shooting enemy would be cool in my opinion). It could also add to have some type of upgrade apart from the health, for the weapon and yourself.

I also think it would help to have some hint about where the door is when the exit opens (not necessarily something that gives it away, maybe just an arrow in the direction).
It is very easy to finish the level and then get stuck for a long time looking for the door, and since the enemies come back after being killed it can get a bit frustrating.

The visuals were pretty cool, I especially like the bats and their animations.
I think a few decoration for the rooms would help a lot in making each room feel a bit different.

Not sure what the garlic does, I assume it adds score but I would explain it to the player.

I enjoyed the sound effects, they added a lot to the feeling of responsiveness from the game.
Background music was a bit missing but there was also something nice about just hearing the shooting sounds :)

Overall this was a fun game, good job on it!

Thanks for your detailed feedback!

Love the gameplay, lots of fun running around and shooting vampires.  Graphics reminded me of the Terarria dungeon for some reason.

Ok this game more beyond its simplicity keep me playin some rounds, the finite gameplay inspire you to finish. A thing to mind in the gameplay is the infinite bullets, you click the shot button all the time, if bullets are infinite, button is not necesary (unless bullets call vampires atemption).

Graphics can be best for me, is a good mini game, also I think looks more like zombie bullet hell

I didn't love the visuals but they do the job, theme nailed and the gameplay is fun ! Nice job