Turn Based Jam (8 Bits to Infinity)

Prototype for turn based jam 8 bits to Infinity
Submitted by CreativaGS — 19 days, 15 hours before the deadline
Add to collection 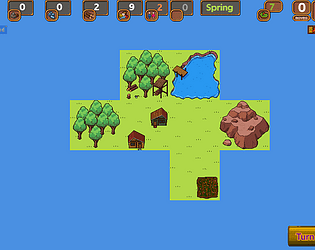 Firstly I want to say that I spent a solid 2-2.5 hours straight playing your game. I really enjoy the calm sandbox-like nature of the game right now and had a lot of fun balancing my resources (I ended up with about 50 population and tons of the other resources after turn 150 or something like that).

I bring that up first so you don't misinterpret my feelings about the game when I bring up the issues I ran into, the feedback is just meant to help you make this game great :)

Issues/suggestions (not bugs but things that I think might be changed/explained better):

Sorry if this was more than you were looking for, but I like to thorough where I can be! Lastly, I really appreciate the visuals of the game. Each tile looks great with each upgrade and the change in seasons is a nice touch :)

Wow! Thank you very much for your time, I am honored to receive such deep and constructive criticism for the game.
There are some issues that I could not review in depth due to lack of time, but that I definitely want to correct.
I had planned to add the Army Unit button, but couldn't finish the mechanics, I was also working on a prototype for battles.
For now, I am going to correct the bugs you tell me, and I just want to say, that I really appreciate all your comments, because they will help me improve.

I look forward to playing the new version :)

Nice job on the tile graphics. I really like the art style there. Like ShibeyFaceGames said, some better indication of what options are available would help.  I also starved in fall, but the seasons changing was a nice implementation of the theme.

Thank you for playing i think i should improve the tutorial a bit more, also i shall correct all bugs and strange issues.

The idea for this one seems pretty good, and it fits the themes well. I like the in-game graphics, they look great!

From a game-play standpoint, I had a hard time figured out what I was doing. I made it into the fall, but then starved. I sort of fumbled my way through it click on things and getting reactions, but never quite understood all the mechanics.

Maybe tool tips on the UI so I know what button to press and when, or maybe a more detailed tutorial could help. As this is a prototype, I could see this becoming really cool with more work! Nice job!

Submitted
Within Her HeArt
LikeReply
CreativaGSDeveloper2 years ago

Thank you for playing and for your time to comment.

I will improve the tutorial and check how can i add i game help to the game.
Good luck and thank you again.