As a mayor's assistant, meet and get close to the town's inhabitants.
Submitted by brendor (@brendorzor) — 14 hours, 15 minutes before the deadline
Add to collection 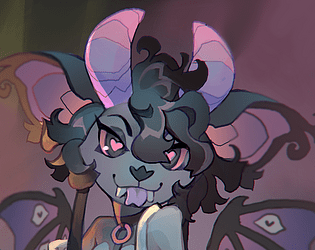 Oooooo, could you make it where you can have a "scene" with the mayor?? I can see it now, "his citizens are so impressed with Yu's work that he figured he would give it a try." Splendid.

How to i get past the fish part?

this game is alsome i love it

The art looks absolutely fantastic, the sounds and BGM are delights on the ear, and the game mechanics feel pretty good. This is one of the few entries that has frequent replay value for me. Well done.

That being said, it's weirdly charming and engaging, despite the incredibly blunt horniness (not that it's an issue!); really wish there was more to do, to explore, and more character to meet. It's a really fun thing you have, I hope it expands into something bigger!

As far as issues, I agree the clicker game isn't ideal and I also noticed slowdown while playing it. It also would have been nice if there was a visual marker for the hidden items, like a shadow from the box behind the tree. This would avoid a click-hunt even if you don't highlight them like Impy suggests for normal items. I'll chalk these up to time limits, even with them what you accomplished in a month was impressive.

omg, the art and character designs are excellent.  there's such a strong floraverse vibe here??  you really don't see a lot of kemono-like designs in western art and i'm so glad to see it

i played both the jam and the post-jam versions, and BOY what an improvement; it was a huge grind before.  did not help that i was using a wireless keyboard from the couch, which it turns out is not an especially responsive way to play a rhythm game, whoops

it's kind of a shame that the rhythm game ends up being the core mechanic, because i think it's the weakest part?  there's not much variety to it, it ends abruptly as soon as you fill the meter, and there's the slightly goofy problem of having the background change but being unable to look at it because i'm busy playing a rhythm game.  i also can't tell if the notes are supposed to be in time with the music, but that might be a problem with me — i have a hard time playing rock band on anything less than expert, because note patterns don't make sense to me if i'm not doing something on every beat

i wish the world were bigger!  i thought the whole town would fill up over the course of the game, but once i realized that wasn't going to happen, it felt kinda desolate.  on the other hand i absolutely understand what an immense mountain of artwork that would require!

what is there is really cute and charming, with everyone oozing personality.  (except the mayor who just runs out of lines a third of the way through, even after completing everything.)  i want to spend more time in this world and meet more folks!  which is probably the highest compliment i can give

the plot unfolds nicely and has some satisfying beats — not twists, exactly, but interesting things happening that weren't obvious, which is impressive to fit into a relatively small narrative space.  the sketch easter eggs are a nice reward for poking my nose around and i really liked that we commented on them in-universe

spoilers: girls with dicks are good.  thanks

i don't know what else to say!  i've only played a quarter of the games so far but i would not be surprised if this won overall.  fantastic job

Hey, thanks for the lenghty review! :3

About the floraverse vibe - we’re fans of it and played all your games, so there’s some inspiration coming from there :D

Regarding the minigame, I wanted to have some interactive replayable part in the game which would serve as the income source, but the execution is lacking because it’s not actually a rhythm game, rather some kind of a weak click-in-sync-and-ignore-the-music game. I’m planning on reworking and redesigning this section entirely because it doesn’t require any new art.

I’m very happy that you like the world (just a small village, but “world” sounds cooler) we created~! We had a few more characters planned and more story would unfold, with possible expansion to the north (a bridge through the river maybe) - but as it usually goes with a jam game, we couldn’t fit everything in in such a short time (flu season didn’t help as the artist was sick for over a week). The dialogue is heavily influenced by me reading tons and tons of doujins which usually have this kind of cheesy stuff. Maybe I should read more serious erotic literature?

Also it’s my first time writing dialogues so I need a lot of practice in this field… but I think I learned a lot writing for this game. I hope I can persuade my artist to work on this or some other NSFW games in future, because it was a lot of fun :)

Here’s a reference sheet to give you a hint of what other characters we had planned.

-I would like to see some sort of slight highlight in the overworld to show what you're trying to interact with.

-Repeating text and common messages should probably be abbreviated and displayed all at once instead of letter-by-letter. The player clicks through it all anyways and it ends up as a dialogue of cut-off words.

-More money earning opportunities, especially of the sort that you can just keep doing without breaks until you have enough.

Very, very impressive game to make in a month. The whole team behind it should be deservedly proud of their work.

Thanks for the review Impy! The money grinding is what people usually don’t like about this game, so in the post-jam build it’s made a bit easier. Also there’s a pouch with 2500 coins you can find in some of the trash bins. With only 5 scenes, I didn’t see a point of more minigames or other earning possibilities, as the grind is there just to have some “resting” time before the next scene happens. Not sure if it’s in the jam submission, but we now have “E” icon above doors to show that you can interact with it. I’d like players to explore the map and try interacting with the visually obvious (or less obvious) objects and be surprised when they find something and putting the hints above every interactible would disallow this. The repeating text idea is nice, it makes sense to me that when Yu’s talking to herself the text could show instantly (for example when entering her room). It’s questionable if it would make sense to have other characters speak to you instantly though, as the text beeping is there to emulate actual speech.

Anyway, thanks again for the review and your kind words, we appreciate it a lot! ^^

Great game, but I couldn't figure out who the purse belonged to. No one in town would accept it. Is it just there for quick cash? I couldn't find the second picture either.

Hey, the owner didn’t make it to the jam’s version, so it’s just there as a moral dilemma :D One picture is beneath the yellow flower, the other in one of the trash bins to the south.

Love the art and the characters are cute. Maybe you should increase the walking speed.

There is a way to walk faster ;) Marionette gives you a buttplug after the first interaction.

Impressive amount of polish into the art and animations. Also, any game that uses different text blips depending on the character automatically gets a five stars in sound from me.

Thanks! It’s actually just different pitch per character, but it kinda works I guess :)

I couldn't get past a certain point without grinding the minigame, which is frustrating  as you need to get a perfect score nearly every time to actually beat it. I also dislike the way you're thrown right into the minigame without any instruction.

Thanks for the review - the grinding is there to add some play time between scenes so that the game is a bit less linear (it’s still very linear). Anyway, a tutorial might be a nice addition, but you still get full reward for the first play, so it’s ok if you fail the first time. Also, there’s a way to make walking between houses a bit faster.

Ahh, I love the art and the characters here. Unfortunately, I met the succubus and now I'm not quite sure what to do next. X3

Have you seen the ritual scene? You can get the pebbles from Mona’s bag, and the vial is sold by Mona as well. Also there’s a “hidden” scene with Marionette you can have before the succubus.

I haven't. I remembered the succubus told me I needed some items, but when I talked to her again she wouldn't mention them. Maybe that would be worth adding to her repeat dialogue? It's good for the player to always have reminders available of what their goals are.

I cannot believe how gorgeous this game is. Every time i met a new character, they became one of my favorite character designs of all time.