A cute lightweight puzzle game. Can you find the frog?
Submitted by Poobslag — 13 hours, 38 minutes before the deadline
Add to collection 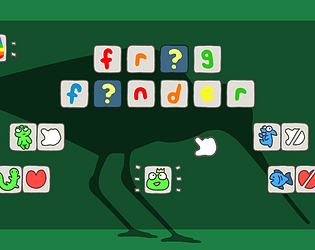 My goodness, my gracious, my froggness! This is wonderful!

I was intending to try to play each game for 5 to 10 minutes, but somehow I played Frog Finder for over an hour and still found it difficult to draw myself away from. I don't expect that I will play another game from this jam that I appreciate as much.

I enjoyed working out the various puzzles, and appreciated that the lizard puzzle (not the other lizard puzzle, that lizard puzzle) made sure that there was still something for me to feel like I was learning the ins and outs of when I discovered the third difficulty.

I also found myself constantly enjoying the unexpected moments and defied expectations that the game crafted for me. Getting sharked in the menu screen??? Fantastic!

I felt that the 2 - 3 frame animations bringing a sense of constant movement gave the game a dynamic and fun feel that elevates what's there in a very efficient and effective way. The background animals are a great touch that gives a little something extra for the mind and the eye to absorb alongside everything else that's going on. I can't help but feel that every visual, aural, and mechanical aspect of this game is exceedingly deliberate and well executed.

Edit: Now that I think about it, maybe the two lizard games would benefit from having slightly more visual differentiation at the outset, but that's a very, very small friction point in a wholly lovely experience.

I did find myself wishing for a sticker book to place and appreciate my found friends, but I also feel like there's value in that wanting, and in feeling like that hug moment is the last moment and should be treasured (until next time).

I'm sure I will be coming back to Frog Finder for many hours to come :)

I hope you had a positive experience with Godot, and thanks for doing a Linux build!

Wow, it sounds like you really explored the game fully! I didn't expect anybody to find or notice all that stuff I snuck in.

I have something like a "Sticker Book" in mind for the full game! I think two big things missing to make this a full game are 1) a longer series of trials to advance through, and 2) a sense of progress where you can show off how much you've played, your best times, your best scores, which frogs you found, and things like that.

I have some ideas for how to fix each of those! And based on your sticker book idea it sounds like maybe you have some ideas too. But mostly, I'm thinking about a series of many, many worlds which each introduce 2-3 new puzzles at a time, and which intermix those puzzles with ones the player's already seen (like a 50/50 mix of old and new stuff.) And, some little things like the sticker book idea where the player can relax and look at all the cool stuff they did.

If you have any other ideas I'd love to hear them! Thanks so much for playing frog finder. And good job on finding so many frogs 🐸

Keeping a 50/50 mix of old and new sounds like a good way of balancing things - maintaining the increased complexity/subversion of expectations ("frig" and "froge" are wonderful ways of expanding the possibility space in ways that align with what's already been learned, but still represent a curveball along the way) where possible feels important too!

I have a few ideas, but I want to first acknowledge that my sensibilities and tastes (not to mention workload!) aren't guaranteed to align with yours, and I'd recommend trusting your own instincts since that's what brings the most intrinsically "you" qualities to your work! I try to share experiences rather than unsolicited suggestions, but since you asked, here are the notes and thoughts I made while playing.

So far as a "sticker book" type thing would go, I think I'd look toward something that presented as detail-dense scenes that the player could pan around and zoom in on to find places to put their frogs. My mind goes to Richard Scarry's busy little town illustrations and Where's Wally books (possibly Waldo for you?) and the way that noticing little details and character's activities brings a sense of life and vibrancy, though those examples are much, much higher density than would be a good fit for Frog Finder, I think.

I like the idea of being able to place a frog anywhere and that be fine, but have some positions that are a match for particular frogs - the snorkelling frog might fit nicely at the beach, for example. A visual effect, or some special music, or a different two frame animation when placing a frog in one of those positions could give an extra layer of exploration and discovery.

It'd make sense to have a place (a separate scene maybe?) for sharks too - players are going to accumulate them, and having somewhere to place them and reflect on progress feels like it could help reinforce the sense of having passed through hurdles and put a fun spin on what might be less-positive for some players.

You've already seen it, but I could imagine a moment like this hiding somewhere in Shark Town :D 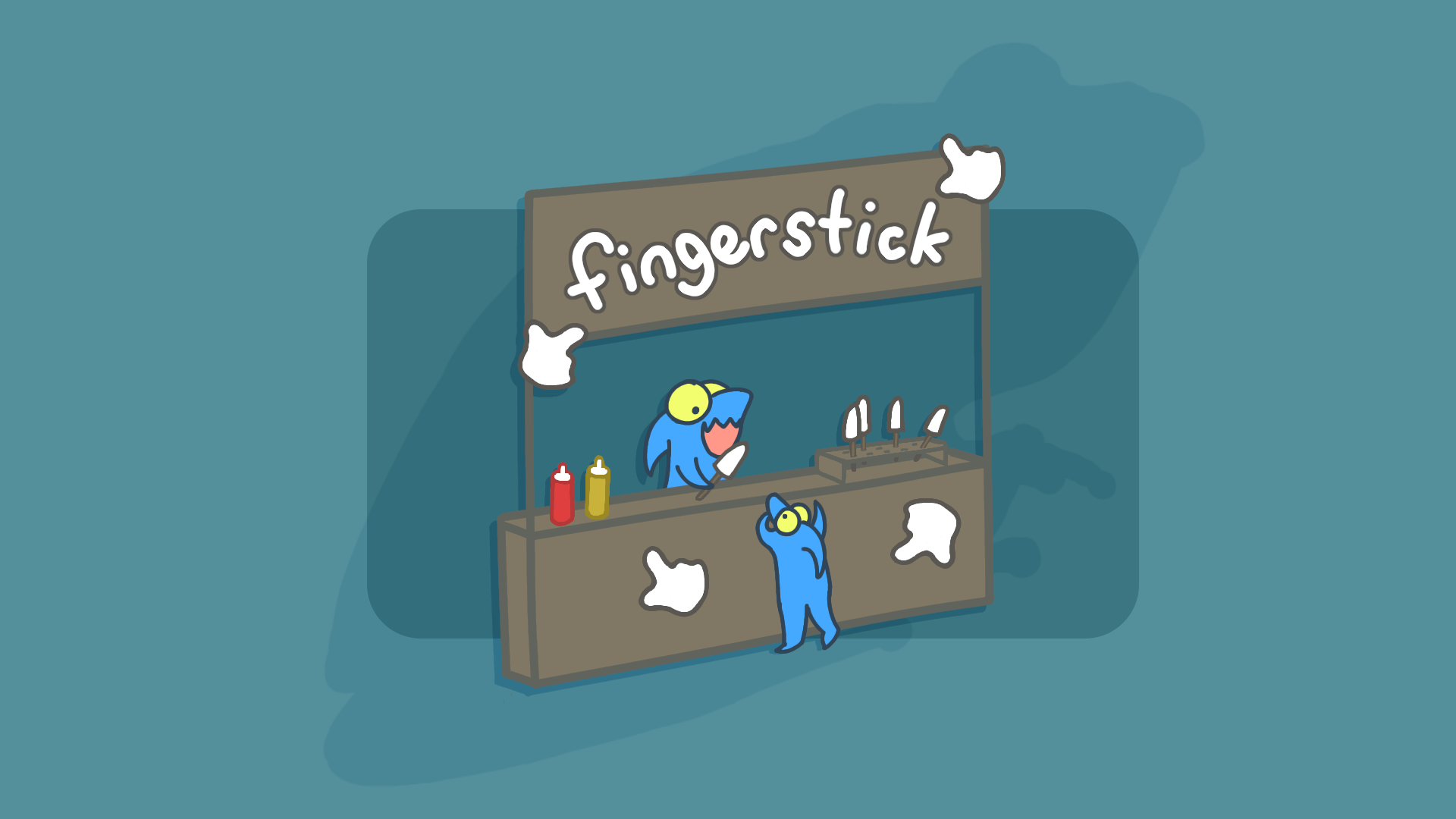 For tracking times and scores, I'm a big fan of inviting players to reflect rather than compete. High scores and best times have limited value - once you hit your skill ceiling, you'll get lucky one day and that's the best you'll ever do. Leaderboards give you abstract numbers to compare yourself to that represent people you typically have no social context for and will never have an opportunity share experiences with - only a handful of players get to be in the top 10, and the personal value of a ranking diminishes rapidly for everybody below that.

In some of my games, I've graphed the past N playthroughs/runs to let players see how they've improved over time and think about what they could improve. I still show historic best times/scores, but give more emphasis to how current performance compares to recent performance, which I think provides more opportunities for players to feel positive about and motivated by their experiences.

I feel like there's room for a lot of additional UI responsiveness - hover sounds, maybe visual pops, twists, or scaling when mousing over tiles could help make everything feel a little more dynamic and interactive. This one in particular, I had reservations about mentioning. I feel like Frog Finder has a very deliberate level of fidelity/style of polish to it, and maybe those kind of additions could push against that identity a little.

I'd love to see the "progress summary" screens be interactive, either by allowing players to click to select a "slot" on the current row, or by clicking a continue button. The opportunity to "stop" and rest/think/step away from the mouse for a bit feels like it could be of value to some, and the ability to click through quickly might remove a friction point for players who get impatient.

I'd also love to see a "return to menu" option to allow in-progress games to be abandoned. I can't imagine that I'd ever want to not see a game through, but I could see players who're trying for "perfect frog"  appreciate being able to restart quickly. If this also allowed an in-progress game to be saved, that could be useful for players who need to break up play sessions on longer/harder difficulties too.

Last but not least, if the sharks had a small chance to trip while chasing the cursor around and then quickly get back up to rejoin the chase, that would be super adorable.

Edit: Oh! At some point, I was wondering if a splash screen for a fictional frog-focused educational commission or frog preservation society might be a good fit for helping to give some additional tone/framing going in.

Wow! These are really cool suggestions, so I'll respond to them individually

This is a cool idea, but I want to avoid it because I want to have a lot more frogs and sharks. Currently it takes me about 5 minutes to draw a new frog, so I could probably add like 50 frogs in a day if I really went at it. ...This suggestion makes it harder to add new frogs because at a mininum, I'd have to have new graphics for each frog without the 'card' outline, and logic for where each frog belongs. But to actually make it look good -- I'd probably want to have logic to make sure you don't drop a scuba diving frog in the sand, or a weighlifting frog in the middle of the sky. So I'd have to choose between having 100-200 simple frogs like I have now, or 20-30 cool Richard Scarry frogs.

> It'd make sense to have a place (a separate scene maybe?) for sharks too

I love this idea. I have ideas for a frog artist who draws you pretty frog pictures as you find more frogs. Maybe there can be a shark artist too!

I greatly respect your ideas on this. It's discouraging to repeatedly look at a high score you set months ago, or to be faced with the implication that every playthrough is pointless if you didn't set a record. A "recent N playthroughs" idea is intriguing but seems like overkill when there are 20-30 different levels to chart, so I'd lean towards something simpler

These are all good ideas! I was originally going to have the cards flip over like playing cards, although now I like the snappiness and surprise of just having them "Pop". I still think a little squash stretch or scaling would be a good addition. I don't want to overdo it because I think the understated subtlety of the UI adds to its charm -- but just a little!

> I'd love to see the "progress summary" screens be interactive... I'd also love to see a "return to menu" option

> if the sharks had a small chance to trip

Ha ha, this is a very cute idea. ...I don't think it would be hard to add. ...Actually, when I was first making the game, I considered letting the player keep their finger if they avoid sharks for long enough. But, it feels like it might turn what's currently a cute easter egg into a tedious mandatory experience.

Thanks for all your suggestions! I'm going to turn most of these into change requests and enter them into my backlog for the final game. They're very good!!

I love this submission. Everything from visual presentation to the sfx and music is cute and works perfectly.

I *really* like this one. Charming as all hell. Thanks for entering the jam!

Wow, thanks, that means the world to me! It was my first game jam ever but I'm looking forward to the next one. I had so much fun!

Music and animations are so cute! I like that there is rules player will learn by trying. FROG

Submitted
Thanks you Cube
LikeReply
PoobslagDeveloper45 days ago(+1)

Thanks, that's what I was going for! Some of the rules are very hard to figure out, but I think it's a fun idea.

Ooh, this game hits all the right notes. A little bit of edutainment, a little bit of kid pix, lots of cute pictures (the frogs hugging! aaaaa) this is just very well constructed and I appreciate this game. Thank you for making it. \o/

Wow, thank you!! That's exactly the vibe I was going for, the "slightly misguided edutainment" vibe where the game teaches you misspelled words and is maybe sometimes a little frightening for children. I'm so glad you liked it!