as the night marches, when noises crawl, the stranger loves you. the grass dreams. where legends breed, a cosy whisper, in sturdy shelter, a reluctant hearth wood is born.

when winds grow hot, cloud sleeps, absence wishes. the raven walks, the song is alseep, the myth loves you.

Not bad for a first 3D game! I like the polish to the headbob and sprint mechanic. I will say looking at the grass destroyed my computer’s performance, but otherwise a neat little scene.

In case anyone else is considering buying this game, or already has it and is looking for help, there is a Let’s Play series someone did of this entire game to help point out specific puzzle solutions: https://youtu.be/nSb2smAqV6s?list=PLHug1m2vDGQw8VrjUobMsLyqX11Wl2EnJ

I was enjoying some of the opening puzzles, but I got super stuck on the sundial puzzle for 20 minutes and I didn’t know what I was missing. There’s not much in terms of up-to-date tips on the steam community, but this video walkthrough definitely makes it possible for me to see more of this game than the first 15 minutes of content.

Looks really cool. Do you think you could get it able to fit smaller screen sizes? I’m having trouble playing on mobile where the viewport doesn’t stretch and everything is just kinda funky 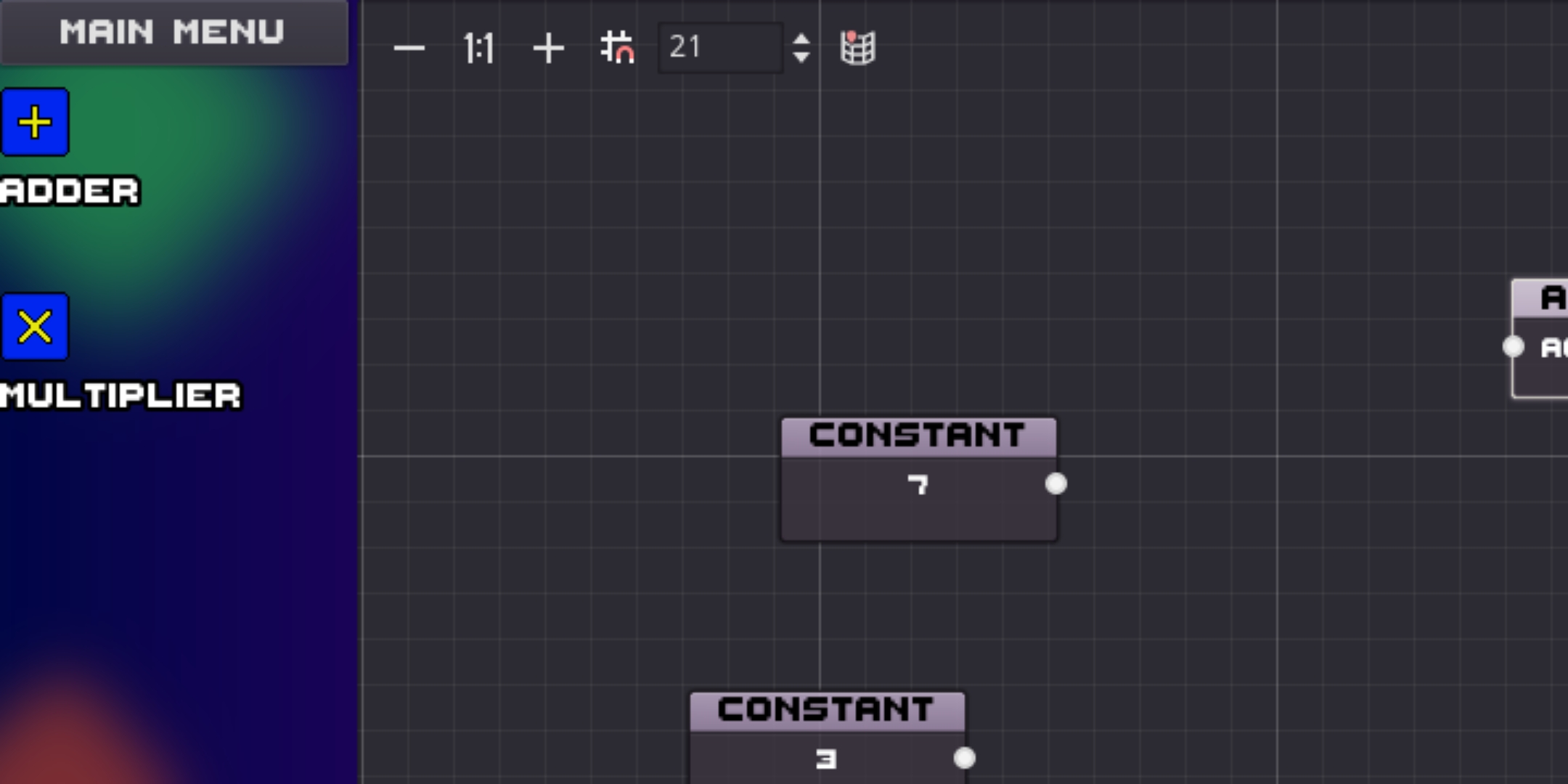 Oh disabling shadows fixed everything for me, wow, thank you.

This is only your 5th? This is really good, damn

This is so cool! Nice job

Reply
STOP WAITING FOR GODOT community · Posted in Didn't submit in time, but it's unfinished anyway
deertears17 days ago

Good to hear you learned something, but sorry to hear you missed the deadline. You already have my/some other’s attention with this community post, so linking it here would be a decent alternative if nothing else.

What did you use to create the level geometry? I see you’ve got some BSP style geometry that rings very strong of the GoldSrc importer or Qodot.

Ah, by “stuck” I mean more I just didn’t know what to do once I got the dash powerup. I even saw the final boss but I couldn’t aim far up enough to actually attack it. I assumed there’d be some key to turn the blue-metal platform into an elevator or teleporter or something, but I couldn’t find it despite killing everything and jumping around stuff.

Reply
STOP WAITING FOR GODOT community · Posted in Can i summit now.
deertears18 days ago

Yes, there’s no rules saying you can’t change your game after it’s been submitted.

You can upload new .exe (or .zip) files to your game’s page: 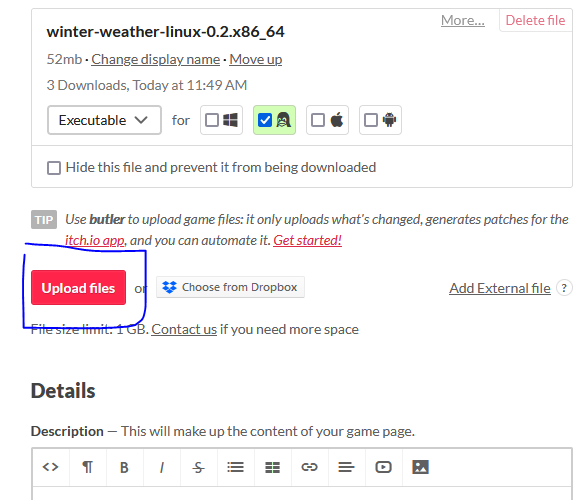 Thanks! Heck I gotta play Myst and Dear Esther sometime. I worried the clues would be too on-the-nose for people but I’m glad you saw it as an upside.

I enjoyed this! Got stuck trying to reach the final boss, but the controls are really good. I love the way you keep getting stronger in terms of movement as the game goes on.

Super cute! Reminds me of simpler times with shockwave games I’d play in my browser. Nice job getting 3D animations to work, I don’t know where I’d start with that.

As a die-hard Zuma fan I really love this translation of the game into an FPS. The combo system feels so amazing and near-identical to the original. I played this and just nearly lost to the last stage. Really in love with the execution of this.

Although I was having a hard time running this above 30 FPS. Any GPU-heavy post processing effects made it hard to aim responsively on my intel IGP, so that took a toll on my strategy. Some way to reduce the visual effects at the main menu would be nice so I can just go for strategy, but I still loved playing through this a ton.

Ooh, this game hits all the right notes. A little bit of edutainment, a little bit of kid pix, lots of cute pictures (the frogs hugging! aaaaa) this is just very well constructed and I appreciate this game. Thank you for making it. \o/

Really good shader work here. Never done drugs but I enjoyed this “search in the grass for psychedelics” simulator. Unfortunately my laptop’s not super powerful so it started to tank in the later game, but the vibe is very strong.

Steering feels a bit weird but I miss arcade racing games like this a lot, nice entry! :)

Thanks for playing, glad you enjoyed it! Those are good points, I just updated the game to fix most of that, the feedback is appreciated. c:

Since comments are disabled on the fence pack, I feel like I should note that the model and textures files for https://brokenvector.itch.io/low-poly-fence-pack are actually the same as this pack. The blend files for the fence pack are fine, just the .dae files have this problem. Love your packs!

Awesome! Thank you so much for the quick response 💙

Hey, just bought this pack, I love what's in the other packs, as well as what's promised in the preview, but this actually is just the CartoonSounds pack again, not UI Volume 2.

I would really appreciate if you updated this pack to match that, thanks.

Yep, you can do random math

This game is super cool. Although I was expecting two Ls (one flipped) to make an upside-down T that I could right-side. I also took forever to figure out X even though I already had Z. Still an amazing game to play though, really brought my day to a good end :D

Really cool! Is there a license for using these?

Amazing! Thanks for making this!

Amazing soundtrack all around :o woaaah

And I really love the style of this gameplay too! Glad to see action games for GB Studio popping up like this.

Neat concept! How do you handle swapping the guns so they remember how much ammo they have?

I got all the upgrades for the PC with a performance score of 7680. The game is rough around the edges, but I liked the idea of this game a lot. Making money with a computer for the purpose of building a better computer was fun. :) It would be cool to see the computer's temperature, processing speed, voltage requirements, and more statistics to make the buying/equipping feel more relevant to the needs of the computer.

Also, I ended up getting stuck here, unable to jump out by the bonus mushroom ^  ^; 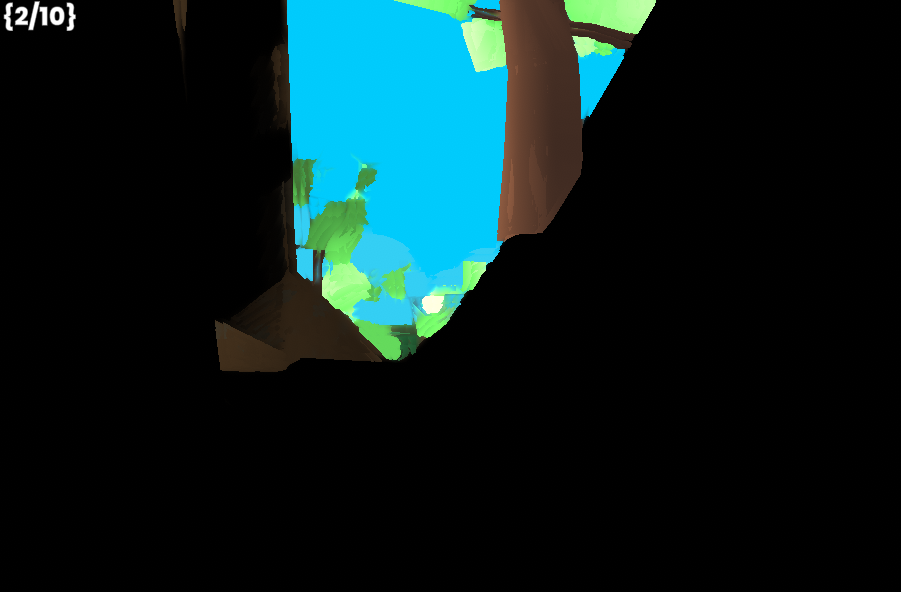 I love this atmosphere, but I'm having a really hard time with the mouse sensitivity being so low. Could you make it adjustable somehow?

I also wasn't super sure what to do or that I could do anything in the game until I looked down at the controls :P but I eventually figured it out. I'm really glad you picked this cart :3 Again, the atmosphere really gives it justice

I keep coming back to this game, it's actually really fun to play and still a really cool concept to me.

Sorry I didn't post this originally with any screenshots, I've now fixed that ^  ^;

Alright, so the case I picked was Steve Propst's case called Footy Kit Designer: "Enter the exciting world of football (soccer) fashion. Design amazing looking kits for the pitch and the street." 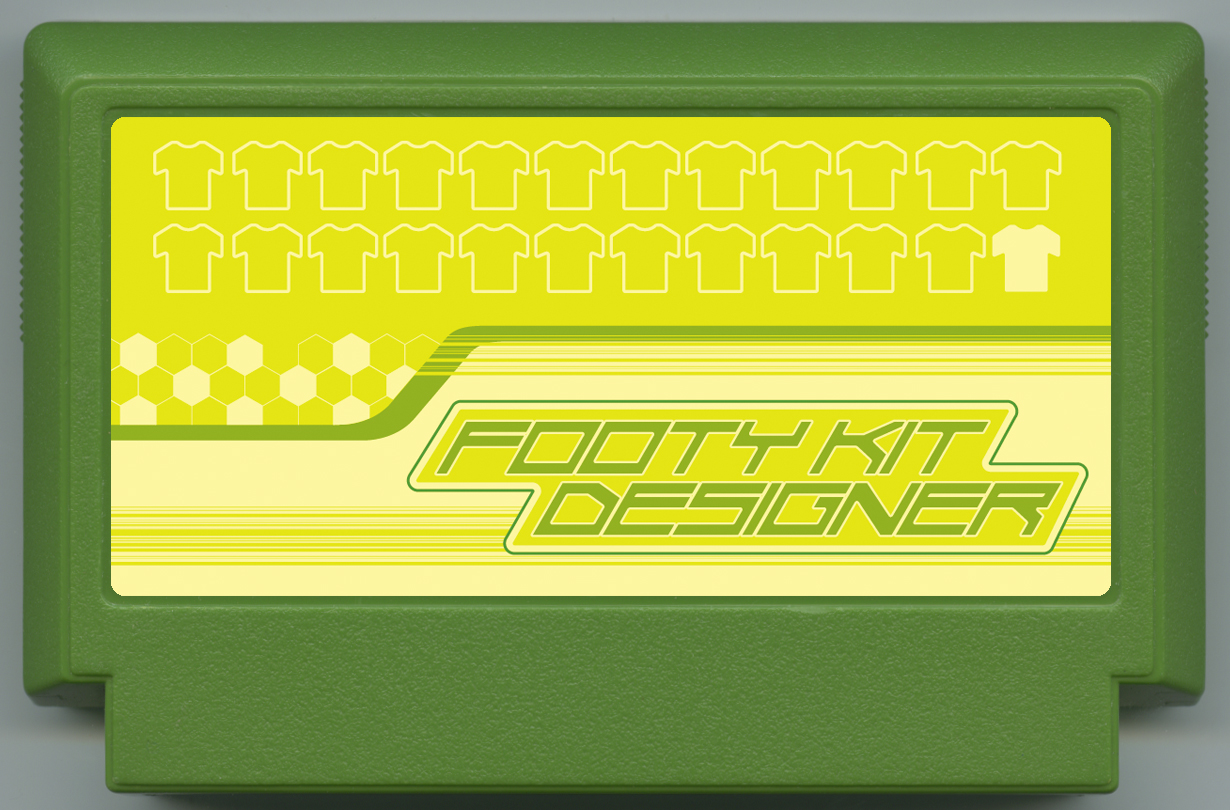 I picked this case because of the Y2K look to the typeface and surrounding graphics. I knew I wouldn't be able to copy the look of this case exactly, but I wanted to turn this case into a character customization  screen.

My first step was to make some buttons and a space where I could lay some 2D sprites on top of eachother. Then, I used Illustrator to make some collars and a shirt shape based on the case's shirt pattern. My shirt came out unreasonably pointy and I tried to smooth out some vertices to fix it, but it just looked unnatural. I eventually redid the shirt, but for now, have a unreasonably shaped shirt: 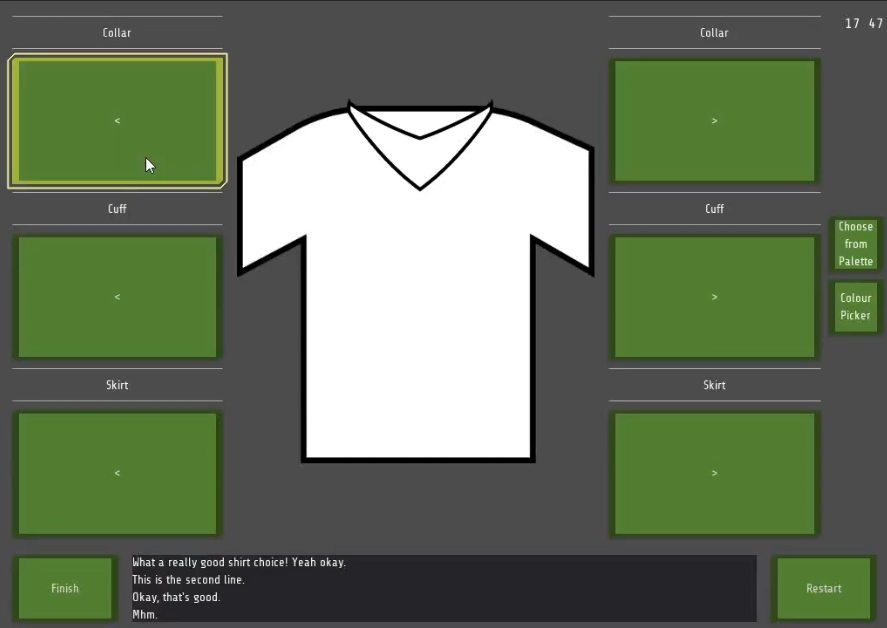 This screenshot is from a version where I thought I was going to have commentary given to you on what some background voice thought of your design. I put it here subconsciously since the last game I was working on was a visual novel. I later scrapped this entirely to keep the scope down, and found other ways of filling the screen space.Here in this early version of the colour screen (I didn't document my progress very well) you can see that I planned to have 5 whole colourable items and I didn't realize how tired I'd be after making just 3 sets of assets. Making content for this game is hard when you're also doing all the programming ^  ^; but I can see some other dedicated artist going ham with it. 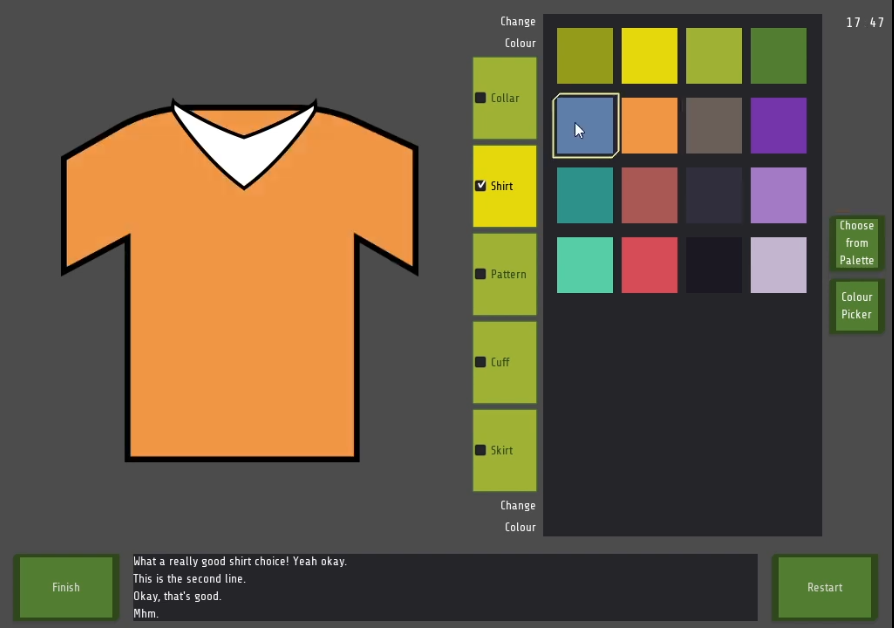 I'd love to work with anyone who wants to help turn this game jam game into their own customizer-thing, if they're the kind of person who wants to make lots of content and doesn't want the prescribed, laggy setup of most online avatar makers. Either that or I'll try to make this project open-source on my github page eventually: https://github.com/deertears/

Something I'm the most happy with is how I got the palettes to work. I knew I could've just done a colour picker, but that would've been asking everyone to suddenly become a graphic designer and understand colour theory. I figured it would've been more fun to pick from a smaller set of palettes:

So here I have all these buttons reading a 1x1 pixel space on this atlas texture. Each button is a scene that can be instanced pretty easily, with just one script attached. Here's the code that grabs the colour from the icon:

Then, in my main game script, I threw this in my _ready() function:

And of course my main game script has a color_chosen(color) function to fit this connection, which does some inefficient passing around before it gets to color_selected_part(color)

Oh, color_target is what's being changed when you change what you're colouring. That's a variable I defined earlier. There's also an enum to keep track of pieces of the shirt. Anyways, to summarize:

2. Read ColorButton's icon color and pass that in a custom signal

3. Mass-connect every ColorButton's custom signal to a function in the game script

4. Check our target to color, and apply that passed icon color to the sprite we wanna change the .modulate property of

I later went on to make the finish button save the colors and pieces used in the shirt, as well as to take a screenshot of the shirt. I still have yet to make loading actually work, right now it's just saved variables. I'll have to add a warning to really make sure that people aren't going to rely on the save/load system, or risk just gutting it entirely for scope's sake. I still have a few days left, so depending on how my graphic design classes are going I'll do something to address that.

Thanks for reading about my game jam game! Many thanks to Steve Propst for making such an interestingly specific idea that I thought was fun enough to make a game out of! It's now public, feel free to drop feedback/suggestions in this thread too! https://deertears.itch.io/footy-kit-designer

Reply
A Game By Its Cover 2020 community » Discussion · Posted in did we just get extra time?
deertears360 days ago

Oh heck yeah, thanks for the extra time. I'm pushing myself a bit (heathily, positively, don't worry about it) to get my game finalized and packaged up before tomorrow...but now it looks like I have extra time to do a bit of polish at a more leisurely pace! I appreciate this extension greatly ^  ^

Oooo I saw this case and I was very excited to see that you picked it. I'm super interested in how this'll turn out (no rush of course) and the music is super cute too!