Prevent the paranormal investigator from proving the house is haunted!
Submitted by Chris Dichmann (@flying_dichmann) — 58 minutes, 46 seconds before the deadline
Add to collection 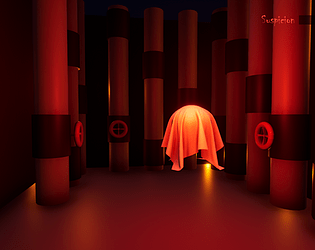 Has a lot of potential. I like the spooky graphics and scenery. Monitor up - down - left - right might be better for controls instead of world x and z. Had some experimentation with this (: Good game.

I like the description of the game and may be graphics.  I run this game on Linux through Wine and it is very very slow and dark. Therefore, I could not play and I cannot participate in the ranking :(

Thanks for the review! We're working on making the game more accessible to Mac and Linux users right now!

First of all, I love the ghost model - even though it's simple the cloth animation looks really good. Sound design is simple but works well. The variety of minigames makes the game much more fun. One time my camera did get stuck in one room whilst my ghost was in another. I would consider maybe adding some sort of visual indicator to show where the detective is, since I could be running off into another room to fin d haunted objects and I could easily lose his trail.

"Increased difficulty as suspicion grows."
The investigator is just standing in place. I'm at 75% suspicion. He wouldn't move for the love of god. xD

I really liked the description of the game and also the graphics, so I checked it out. I would really love if the lore would reflect on the gameplay as well.

It has small minigames at different places similar to those in Among Us. But in Among Us the fun part isn't doing those minigames, but the rest of the game. However here the gameplay is doing these minigames. Which seemingly don't affect anything, since the Investigator can see them way before I could finish a given minigame. So I'm just running around un-haunting objects, while the Investigator runs around increasing Suspicion.

And with this being said, the minigames aren't bad. But not good enough for the main gameplay. And I get that it's supposed to have an impact on the game overall, since the Investigator doesn't find anything if you un-haunt the objects... But they get haunted way too quick, and seemingly infinitely, so your actions seem to convey no impact at all.

(the graphics are great, by the way.)

Thanks for the feedback: we're taking all of this into account as we balance and change the game!