Oh, glad to receive your feedback! Thanks. I will start implementing the battle mode soon.

Apart from a few minor changes, there are two that we've worked on most productively:

2. Experiment with submarine control. Without changing the main control mechanics, I introduced a cursor that the player controls directly. And the submarine overtakes him smoothly.

Completed the Fog of War. Now the territory is not initially visible to the player, and only when the area is explored, it is opened for viewing. 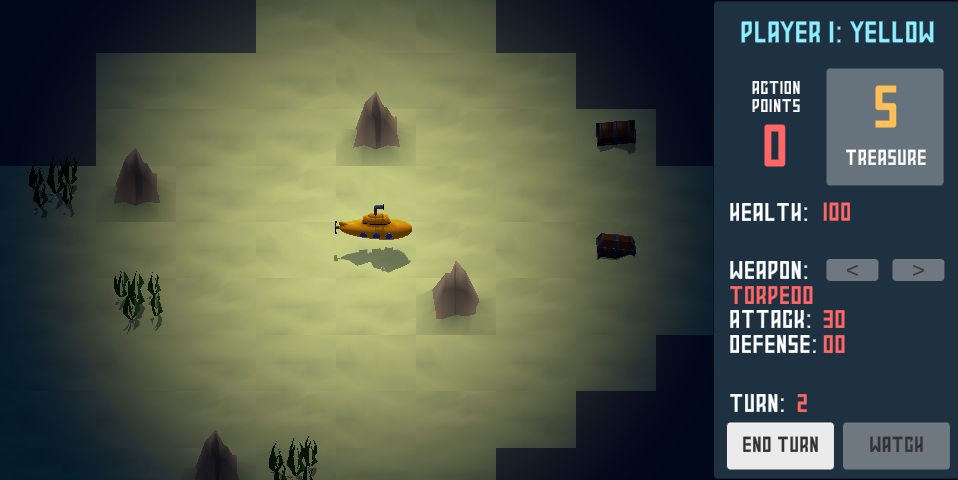 Thanks for the suggestion. I really need help with music and sound effects. I wrote to you in the mail.

This game is about a submarine fighting in search of treasures hidden in the depths of the ocean.
This roguelike game was made for WGJ 213. First version was made for two players only.
Current version for one Player versus Computer!

It is still planned to do:
1)  Done.
2)  Done.
3) Attack mode (torpedoes, missiles).
4) Perhaps there will be a mode of placement of min.
5) Observation mode.
6) Scanner mode - boat detection at a distance.
7) Silence mode - hiding the boat in enemy scanner mode.
8) Add sounds and music - work in progress.
9) Graphic polishing.

Among many other gear puzzle games, this game stands out for the interesting atmosphere of the room escape quest.

The gear puzzle is not immediately visible to you when you start the quest, it opens to you as you launch the gear mechanism nodes, which brings a surprise effect to the game.
The main goal of the game is to move the exit lock on the linear gear so that the puzzle will allow the hero to leave the room.

Thank you. Glad you liked it. Subsequently, an important part of the game is also planned to conduct battles between submarines, not only the search for treasures.

Thanks. I didn't want to rush to make sounds, it is better to devote more time to this later.

I see you felt the atmosphere. Cool!

Glad you liked it! it was interesting to know your experience of passing the game. It costs a lot. I will definitely try to find the time and finish the game.

Thanks for your feedback. I agree. I will definitely take your comments into account when revising it.

Hi! I am a 3D modeler and C# Unity programmer. But I don't make music at all. Has been in game development for 1.5 years. Most of my games on itch.io are made for WGJ and I'm happy about that. Unfortunately, it is not always possible to take part because of the main work, but I try.

Thank you for your feedback. I actually tried to change the history of the game (in the description of the game on Google Play), there is already some kind of cyberpunk theme. But still in general form and without specification. As for the music, I will probably agree, in the near future I will look for something suitable.

I participated in Brackeys Game Jam 2021.1 and while the voting was going on, I was actively bringing the game to the implementation on android. Of course, she did not take prizes, but the reviews were pretty good.

At first I wanted to make some more or less realistic graphics based on this prototype, well, at least low poly. (about ants) However, at some point I realized that I could try to develop the game in such an abstract form. What do you think?

You control the reverse cube, or rather move it up and down. Movements left and right are genetically incorporated into the program of the cube itself, so you cannot control them. The direction of movement from left to right is reversed when the cube rests on the end point of the level and when it finds the crystal.
Your task is to collect as many crystals as possible and guide the cube through all levels and clusters to its goal - the core of the system.
In order to open the exit gates of the level, you must collect your fellow cubes so that your number is not less than the number of gate bolts.

Cool game. Nice music and graphic art. In my opinion a little slow, maybe I would speed up the movement of the character a little.

I liked the idea of using characters with different characteristics. And I also really like the graphics.

Reply
Brackeys Game Jam 2021.1 community · Posted in Looking for people to rate my game and i rate yours!
DragonMesh1 year ago

Thanks. Yes, the character takes a long time to accelerate, and you just want to push him using the horizontal axis keys

Ha-ha. At first I tried to get the other sheep to follow me, but I had to move the boxes! Mesmerizing music at the beginning of dark area. Cool!

Thanks for your opinion!

Thank you for your feedback, I will think about other options.

Fine! Glad you enjoyed it!

Nice game! In my humble opinion, the territory could be made a little smaller.

Indeed, the game is still at the prototype stage. Here I still need to work on the setting and then think over further steps accordingly.

I like the idea and implementation. It is not immediately clear that the shark is moving. At first I thought she was just turning around. And it's a little more difficult for a beginner, the game can somehow work with the complexity. Can give more health in the beginning, for example.