Destroy the current Predator and Become the New One.
Submitted by Garuda Productions (@thegarudaprod) — 1 hour, 15 minutes before the deadline
Add to collection 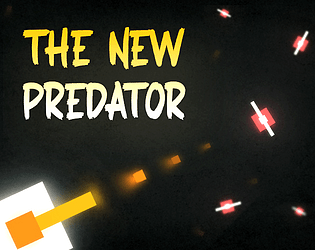 Great Game! It is definitely a well polished game. I like the enemy variety, the particles, sounds, and screen shake. They really give it that "juice" or good game feel. My only recommendation is that I think the end is too difficult. Played for 5-10 mins (good difficultly curve with solid gameplay), got to the end to die perished quickly (like within 10 sec) because of the amount of bullets and its unexpectedness. Wonderful submission that has potential.

Thanks aaron7eleven for the feedback, I will try to fix that in the post jam update :)

I like this game a lot :) really fits the theme with some great enemy types

Thanks Misfire.dev glad you liked that :D

I died at first but then became the New Predator 😄 In some games I don't like when health power-ups spawn when you're at full health and you can't take advantage of them, but in this one I was careful not to pick them up in the second try and leave them for later (many enemies, boss fight), which added a bit of depth to the gameplay, so I didn't mind 🙂 Theme/visuals on point, right amount of juicy; the music was a little too repetitive, but nothing that would take away from the gameplay too much. Nice little game!

Submitted
... Or Not To Bee
LikeReply
Garuda ProductionsDeveloper80 days ago

Thanks, Slampisko and Congrats on becoming the new predator :D

The game fits the theme well with its simple design, but its polished with nice particles and post processing! Nice job!

Thanks djmick254, glad you liked that :)

This was a great entry! The audio and graphics fit the theme perfectly and felt professional. I really liked the subtle glowing effects and the particles. The controls felt really nice and the gameplay was satisfying. Really good job!

Hey! BlackVoidMedia thankyou so much for the kind words but not as professional as yours, I tried your mobile games too, they are great especially pneak, its just felt nice and scarry at the same time :D

Simple but not ugly. Love the particle effects. Just when I was starting to think it was too easy, all hell broke loose and the enemies just started pouring in. :D Fun little game!

Thanks, Kapasiteetti Games, for the feedback. I played your game, and I spent a good 20 minutes just to get the level working perfectly, very addicting and challenging, nice job :D

Really enjoyed it, one of the games with the most fun I have played so far!

Hey! Eirik thanks for the feedback. I tried your ufo game, it really nicely fits well in the theme. The only thing I felt a bit odd is the jump force of the ufo felt a little stiff or I might be bad at it. But overall it was good :D

Thanks, I'm glad you enojyed it! Yeah I understand that the jump force is a bit stiff, hope you still managed to get a good highscore though :D

Mid way through I had a stockpile of hearts all around me. I was thinking, I’ve got this. Lol, nope. Fun and polished!

Thanks, Yammosk :D I tried your game "One day mover" it's good, The only thing I will complain about is that the tractor feels a bit slow. Overall its totally fits with the theme.

I like the particles and sound effects. The control is also great.

Hey Andy! Thanks for the kind words. I tried your game it's a nice strategical game. I get tricked sometimes by the zombies. But overall I really liked it :D

LikeReply
The Pancake WitchSubmitted87 days ago(+2)

I LOVE that shooting noise, LOL. That was very satisfying.

Thanks, The Pancake Witch, shooting sound feels satisfying to me as well, I play your game I loved the art style. I really enjoyed playing it. And Happy Anniversay.

LikeReply
The Pancake WitchSubmitted86 days ago