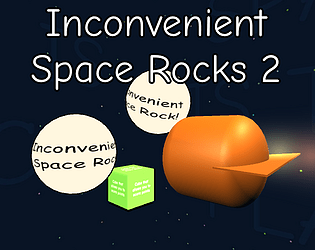 If you have implemented the modifier, how have you done so?
One Button. Each.

Any additional information for voters?
You can play this by yourself (by opening the game 4 times on your computer), or via LAN. And, once again, I have spent way too long on the music that you probably won't even be able to fully sit through. Then again, I wonder what the one button does outside of the game scene itself. tbh I've forgotten. Anywho, this was my first ever attempt at creating a multiplayer game. So brace yourself.

There was so much bad that all worked out so well. I am Kazoo lover, and and the 4 man canon blasting through my speakers, as i launched 4 instances to play, made my speakers cry. Actually a really fun gameplay concept, could honestly see myself playing this with a couple of friends. Big Nostalgia to childhood, and sharing 1 pc playing singleplayer games, with one controlling movement, and one controlling camera.

Well this is certainly one of the most unique games I've played in SBIG. The experience of the menu music playing in 4 instances was one of the most chaotic episodes I've encountered so far, but then the glorious moment when they all synchronized felt damn near magical.

I did terribly since I had to click on each window to move in each direction, but it wasn't as bad as I would have expected playing a 4-player game by myself. I died each time I tried but I found it entertaining. The explosion sound is fittingly intense, you go from zooming through a hexagonal tunnel with some voiceover to suddenly dying in a horrifying blaze.

I'm glad you enjoyed it.

In all honesty, in an earlier build, it was actually much less controllable. I had an idea that would theoretically make it easier to control in one-player where each instance basically toggled the thrusters instead of having to hold to thrust (the idea being that it would make it easier to go diagonally and to multitask) but in practice it just made it even harder to control. But I'm just as glad as you that it's actually playable on a single machine. Anywho, if you wanted to hear the full soundtrack, I posted a link to it on the discord server.

I accept the point about the lack of any indication about what direction each player has. But tbh that idea about randomizing controls after crashing is a pretty good one. I'll try to work out some way of bodging both that and the indicator for what direction the player is going in into the game.

The space rocks really were inconvenient. Great (and funny) music and actually multiplayer. I can't wait to play this with a friend.

I'm glad you enjoyed it, and I'm also glad you didn't find the music too unbearable to listen to.

That was... interesting. I didn't have anyone to play it with, but surprisingly just using four windows wasn't as irritating or awkward as I thought it would be. It's mechanically interesting and sits in that sweet spot of where it's wild and should be unplayable, yet it is.

The not-quite-synchronized kazoo music coming out of four instances is a bit annoying, but grew on me as I played it, and never made me want to close the game.

The explosion effect is really intense and actually scared me a bit the first time I experienced it.

Unfortunately, I'm not able to experience this game in its full glory with friends, and most probably won't either. That's the risk of a multiplayer game I suppose, but like I said, it works well enough alone.

I was looking forward to this one a bit but I'm surprised how much I like it even still.

In all fairness, I haven't been able to play it multiplayer myself, and even I'm surprised by the singleplayer stuff, and I'm probably even more surprised than you about the fact that this somehow is playable.

The kazoo music not being quite synchronized was, as you may have guessed, unintentional. At one point, I was considering making each instance randomly offset the kazoo music a bit, to ensure that they would be somewhat unsynchronized, but I eventually decided that it would just be a bit too annoying even for me so I chose to not do that. And I guess that was probably for the better.

Well done! I think this is one of the first online games submitted to SBIGJam, and it works really well! Opening 4 up and hearing the menu music overlap is perfect and  I'm all here for it! The fact that it's actually 1 button controls is also really cool!

I guess the closest comparison I could think of was "affordable space adventures" for the Wii U where each person controlled an area of  the ship, but the kind of fast paced nature  worked really well and really unique. The music tracks are definitely the standout feature, but the concept is great on so many other levels as well!

We should totally try organise a playtest for this on the Discord.  Well done on submitting!

I'm glad you enjoyed it.

tbh the game kinda went through several revisions (mostly involving tweaking the physics and timings for everything to make sure the Inconvenient Space Rocks were fast enough to be a threat but slow enough to be possible for 4 people to collectively react to them and getting the ship piloting to be the right balance between responsive and controllable and such) and there were a whole lot of dev builds which were honestly rather boring/too frustrating and overall not very fun to play. Hell, it's honestly a bit of a miracle that the game turned out in an enjoyable state.

I've also never actually played this game in multiplayer, so I would be up for playing it multiplayer, assuming that we can work out some way of getting it playable online.

Personally, I still think the concept could use quite a bit of work, and I probably did violate a bunch of best practices with the bodged synchronized physics in the game, and I'm still not entirely sure how this online malarkey works. But hey at least people enjoyed it!

glad you liked it!

Really like the co-op aspect. It makes me want to die, but in a fun way. The geometry is painful to look at.

Submitted
Heart of the Cards
LikeReply
11BelowStudioDeveloper171 days ago(+1)

Played online via hamachi, really cool how everyone controlled a different direction. Would be nice to tell the player what direction they're controlling so it isn't a guess at the beginning. Some more varied on-screen powerups would go a long way for this game!

Submitted
Heart of the Cards
LikeReply
11BelowStudioDeveloper171 days ago

tbh at first the controls were in an (unintentionally) predefined order (host would be up, p2 would be down, p3 would be left, p4 would be right), and the random allocations were a somewhat last-minute bodge. And due to how the overall allocation stuff was bodged, and how little I actually know about how to really use the MLAPI stuff, I wasn't able to work out how to display only the client's direction to the client in question. And with the additional powerups/pickups, I wasn't really sure what else would really make sense in context of this game (or even how the players would be able to use said additional powerups)

I appreciate the suggestions though.

Either way, I'm glad you enjoyed the game, and I'm also glad that you managed to work out how to play the game in multiplayer as intended.

this was super interesting. the confusion in my discord call while we tried to figure out what was happening was really funny. good work on the vocals too

Submitted
Heart of the Cards
LikeReply
11BelowStudioDeveloper171 days ago(+1)

I'm glad you enjoyed the music. I spent way too long making them, and trying to produce vocals whilst also trying to do it in-character hurts lol.