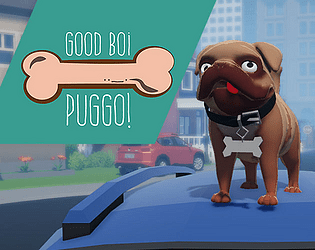 Really loving the UI! It's super pretty and feels like a lot  of care was put into it especially the radial action select. Also love the Cow and Chicken-esque models you have. Really took me back :').Fun game overall !!

The roll over animation was extremely funny, and I was fully surprised when the backyard opens up into a whole street! I especially liked that the writing and mechanics complimented the animations so much in creating this weird world of inflatable pugs

I played the post jam version. I had 19 bones and nothing told me what to do after that. I see you've mentioned something about platforming and a chonky hadeda. I don't know where that is in the game. I was expecting the cat to tell me to do something, maybe, but it just sat under the car. I couldn't win the hadeda mini game, although I thought it was a clever idea, because the mouse controls are too sensitive for me so that needs to be configurable by the player, plus arrow key control options, please.

Well made - well done - with lots of future potential should you wish to expand the game. I think it would continue to work well with new sections of the game that unlock via progression/task completion, as you have already done, so not everything is revealed at once.

Submitted
You Will Not Live
LikeReply
Nothing ExplodedSubmitted212 days ago(+3)

Really impressive entry! As others have said, it's amazing how much you got into this jam game. I really liked the animations and the variety of pug emotes were definitely my favourite part.

I see doggo, I wanna play doggo, this jam delivers.

It's really impressive how much content and systems (movement, quests, dialog, etc) you managed to put together in jam time. Massive props.

Like someone mentioned below, I also got stuck after chasing out the cat and the gate opened. There was definitely a moment of awe when I realised "OMG I'm not just confined to the back yard!". Writing this I see there's a post-jam version, maybe you addressed this?

My absolute favourite part of this is the human character art. It hits on so many levels: it looks interesting, it lets you produce assets faster and it's downright funny.

Thanks for the great feedback. We ran out of time to implement directional dialogue and an additional quest (now in the post-jam version and an additional minigame) but if you would like to experience the rest of the content and the winning cutscene, fill up the Good Boi meter by scaring Hadedas, digging up bones and platforming to the roof to scare the chonky Hadeda.

This game is unbelievably cute, and it's the first game I think I've seen with Ha-dee-das (however you spell that, I've only ever said the word.) Great work!

Submitted
Messages Into The Void
LikeReply
ArtOfNixBeeSubmitted215 days ago(+3)

Hilarious game! I loved that the dog inflated when you double jumped, had me in stitches. The only thing was when I left the backyard I didn't know how to progress the game. The cat was missing and I had no objectives to complete. Otherwise very fun!

So this is how it feels like to be a dog? Wish I could be one lol, love the style and gameplay mechanics!

AMAZING WORK. Graphics were smooth, narration excellent and the story/theme was good fun! Well done to one and all and good luck!

Wow, this is quite an ambitious project for a game jam. A really immersive and well put together exploration. Well done guys!