rhythm shmup
Submitted by homer_3 — 18 hours, 6 minutes before the deadline
Add to collection 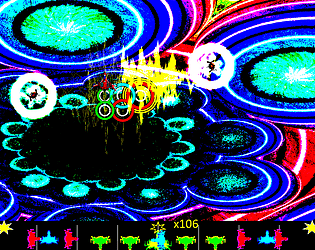 Please mention below any pre-made music or art assets you used.
Used some unity assets and premade music.

Good reminder that I should be looking up twin star exorcists' soundtrack, since I loved it so much.

Submitted
Playing A Piano Is My Calling
LikeReply
ItoohSubmitted2 years ago

A clever concept! Mixing Osu/EBA with shmups (two of my favorite genres), it's pretty cool.

Two main issues though: the first is when the player gets out of sync, it's hard to recover and getting back into action. The second is that there's so many stuff going on everywhere that the game suffers from intense lag. :p It became un playable at a certain point on my machine, which is sad because I'm sure I could enjoy this kind of fast action.

Even so, the game is ambitious, and has a perfect synchronization of ennemies and lasers and everything else. It's at least an incredible show!

Thanks for playing. Did you a still have lag issues when you lowered the graphics settings?

I tried to lower it, and indeed it went much smoother! It was still hard to control (it took me a while to understand that I can only move on beats), but much more enjoyable. The action was especially far more readable.^^

Really intense game! I included it in my Music Game Jam compilation video series, if you’d like to take a look :)

LikeReply
Chase of BassSubmitted2 years ago

This game rocks! ( >u<)\m/
But I didn't like that much because getting a miss when moving makes the ship be always out of place and recovering from that is harder than keeping the rhythm itself.

Yea, I would have liked to have some kind of auto-correcting ability but ran out of time.