VTuberWebcam community · Replied to kitsune.ONE team in Issue with model and tracking
BlueJackalope17 days ago

I've been having the same issue. Face tracking and hand tracking seem to work well, yet the model doesn't react at all.

I've noticed the next error on console. Is my graphics card outdated?

Reply
VTuberWebcam community · Posted in How to run?
BlueJackalope17 days ago

That worked like a charm! Thank you very much! :D

Reply
VTuberWebcam community · Created a new topic How to run?
BlueJackalope23 days ago

What the title says. I'm not that experienced with Linux Systems, so I have no idea how to proceed to run this app. Some instructions would be really appreciated.

Entertaining puzzle game. The aesthetic/design is nice.
Those 2s and 5s, though. They are so confusing in that kind of font!

Are there plans for a Linux version? I'd insta-buy with such a cool premise!

How does one make a T if not in the same way as an L? Merging 2 Ls doesn't seem to work either. I'm pulling my hair at this point!

Mechanics, level design, music and art intertwine so well! This is so good!

You can see on the other replies that it was due to server problems :P

I meant a button to dash or something like that, but that's cool too :0

Playing on Linux. So far so great!

The sounds and music don't seem to play, though. Any chance it could be looked into?

Can't play this on Linux. At a certain point, I get this error and the game crashes, restarting all progress :( Happened twice so far and I can't bring myself to try again. 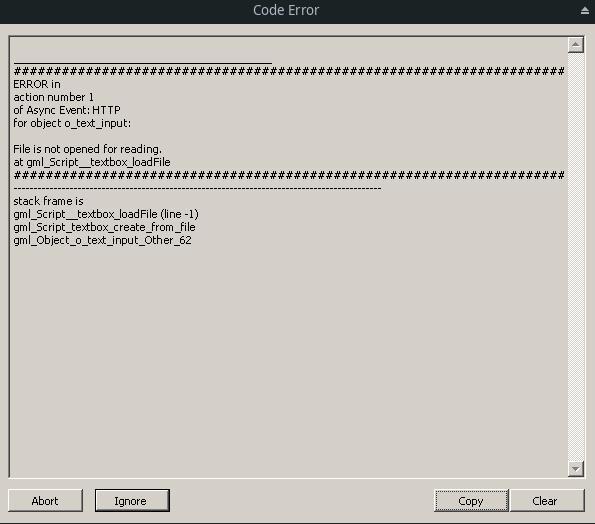 The game's been incredible so far nevertheless. Great job on the story and the atmosphere!

The angle of the ball can't be changed, apparently, so there's not much strategy/skill to it. Grows boring quite fast because of that.

The rest of the game looks so interesting and with potential to it.

I'd have loved an option to skip the levels to read more about the robots. I'm stuck. lol

Well executed, great artwork, I even grew expectant for the plot the moment I realized what was happening the longer the loops grew. Good shit. 5/5

Jumping ferret go SWOOSH! It's so cute and funny to watch at
Nice short game. Interesting execution of the concept.

Loved the game! So cute! Personal preference: I'd like it if I could make Curly fly a little faster

I saw a couple updates for this game on the feed. What's new? Any logs about the updates would be nice.

If the game is just lacking some files, how has this not been solved yet?

Edit: In my case, I had to get another file called "libgconf-2.so.4" and put it in the "lib" directory. Now I'm curious as to which engine was used to develop this game, because it's not the first time I encountered that mysterious "nw" that fails to run.

It needs some polish here and there mechanic-wise, but it has a lot of potential. Nevertheless, the art and music are incredible!

Thanks for the Linux version! :D I'll update this once I get to play it
Edit: Fun game, tha amount of juice is goals. Loved the artstyle! Definitely following

Nice short game! The dialogues and meta-humor were funny!
Just a tiny suggestion about the control interface: maybe make it so that the button icon to swap between controllers shows the opposite controller icons? e.g. "I have a PS controller and I want to toggle prompts, I wonder what button is RB?"

The atmosphere is so beautiful, cute and relaxing! Loved it!
Gameplay-wise, it's nothing new, but it does it's job pretty well

That was a surprising game. A shame it didn't go anywhere else with that mechanic. Felt kind of empty

The game really needs some indicator as to what the arrows on the top actually mean. I thought the game was having some serious bug until I got it on my 6th or so attempt.
Cute art, by the way! :D

Loved the game! It was so mush fun to explore and meet all these characters :D

Thanks for the Linux version :D
Tried it but unfortunately doesn't seem to run. I got an error saying something about a libsteam_api.so not loading, and something about a player.log file. Any way that I can send it your way?

Sounds like a fun concept, but I don't get what the icons mean at all (except the factories and houses, I guess?)

Also, is it intended to get to a point where you lose more than you gain and reset the score conditions? Not a complain, just a note.

The vertex compatible version didn't fix it for me (then again, I'm playing on a Linux with Wine)

Being able to know where to farm certain materials sounds really helpful.

Found the file at "Android/data/com.SamuelVazquez.Ubiquatopia/files", as you said. Copied it directly into "\AppData\LocalLow\SamuelVazquez\Ubiquatopia" and worked like a charm. ¡Gracias! ;D

I just finished the first chapter of the game and I felt disappointed the game ended there. I'm so hooked to the lore and characters! Can't wait to see more of them!

Anyways, the game sent me to the game's page and, now that I know there's a Windows version, I'd prefer to play on PC rather than on mobile. I was wondering if there's any way to transfer the save files (if there are any) from my Android to my PC, so I can keep collecting the rest of the cards.

Which brings me to an issue I've personally encountered with this game: the battles feel sluggishly slow. I'd like an option to speed up the enemies' turn. I don't need to read the effects of enemy cards while they are selecting them, nor see their move grids, etc. when, most of the time, I've already read them beforehand to know what I'm getting myself into.

Also, could there be a shortcut between the deck edit screen and the traits screen? I think checking which traits are on/off after I've made my changes would be more comfortable that way. Currently, I have to go back twice and enter two menu options each time, which feels a bit tiring to do everytime I upgrade/create a new card.

As a last suggestion, a harder setting with more enemies/stronger enemy cards/more enemy HP and what not would be more than welcome for me. Even some of the boss fights felt a bit cheap, since I had prepared well enough for them and I just swept them. The only real challenge I encountered was the last boss (which I must say, I really loved the concept of that fight, caught me off-guard, very original, in my opinion)

In any case, the game is great so far, and I can't wait to see more of it! The kobold and chess cat's designs look so cute!

Cute pixel art! The gameplay was weird and first and sometimes I skipped the books on accident while reading them, but it is a fun concept which I'd love to see more of

It was fun until the speakers started to screach to me non-stop! 😖 Sometimes it cried again even after only half-a-second after feeding it!

Wait, I got a healing spell at the last level, so I can't use it? 🤔