Jumping and hitting, the basic stuff...
Submitted by AJCooper88 — 3 days, 6 hours before the deadline
Add to collection 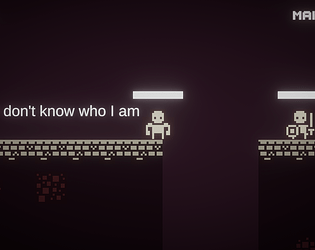 A short and simple platformer which is nice. It has a nice atmosphere that makes me feel like a lost wanderer looking for purpose, and that all fits the theme and story very well. The player can jump by colliding with the side of the walls, which can function as a climb, but it doesn’t feel right because the jump sound plays a lot in that instance. There is also an attack that feels like RPG combat, which I kinda like. Other than that, I feel that there isn’t enough mechanics that can keep the player engaged. The movement is basic and there’s no coyote-time. There is a background/foreground aspect to it at one point, where the player/enemy is covered by the wall, which is pretty cool but is very subtle so it may confuse the player at first. There is also an invisible enemy, which if it is a ghost, should at least have some outline or faded sprite to indicate something. Anyways, I enjoyed playing the game! Good effort!

Well, there is a lot of room for improvement here

1) Physics feel very junky, which sadly is not a good thing for a platformer game.
2) The combat mechanic also suffers - the attack sounds like a firing a laser; killing enemies is way too easy, the lack of animations makes combat not interesting.
3) I'd suggest removing HP bars, with everything dying in three hits you don't really need those.

P.S. I got an enemy stuck in the ground: https://imgur.com/a/ghgvKQu