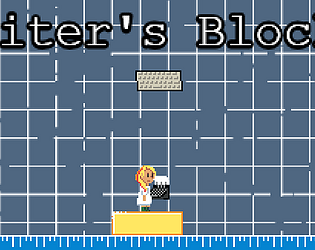 Use of the limitation
You must carry your type writer through the level which shows you and makes your jump too short . Too advance you need to throw it up steps.

I couldn't the full Writers Block word because of the apostraphe in the middle sadly. So I couldn't continue on to the levels. Although I will say, it would probably be a bit nice to help the players out a bit at the beginning of the level as I was confused a bit on what to do. The concept seemed really nice though!

Thank you for the feedback! I encountered this also in Firefox. The ' key opens up quick search, and there's no way to disable it from javascript. The only workaround I found was to install a browser extension which disabled the hotkey for me.

You should also be able to hit escape after typing the ', and it will let you continue.

This is the one of the best concepts I've seen in this jam. Really great way of making a game with a message that is enforced through the gameplay. Sounds and music would have been a really great accompaniment. I think the balance between the platforming and typing was a bit off. Would have liked to see shorter bursts of writing with more platforming. Also maybe some more platforming mechanics and twists on carrying the weight of the type. Overall really nice.

This is phenomenal! I really loved the concept. Keep it up!

Nice concept, I enjoyed it, but it was confusing to understand what to do. All in all, great work!

Submitted
Judgement of the Dead
LikeReply
Hyperspace WizardSubmitted1 year ago(+1)

Very relatable. I enjoyed this a lot. Good work.

Veryyyyy cool concept! This makes for an amazing story driven game. I think a revision of controls could make the game a little easier on the player, I found that the arrow keys for all the controls were counter-intuitive and I often found it hard to navigate the platforming because it was uncomfortable to use the down arrow to drop the typewriter.

I loved the idea of the deadline pushing the character! Although,  when I realized I could just type out the entire text (letting the deadline hit me a ton of times) and then just do the platforming, the 'deadline' became a lot less motivating. I think if you could figure out a better way to make the player manager the platforming and typing at the same time, it would make the game even better!

Thank you so much for the input! Rewinding the text at checkpoints was definitely something I tried to implement, but I had to give up due to time. :P I'm not sure if I want to put that in still or not! I like that the game is still possible, even for slow typers.. you'll just have a very high respawn count at the end.

I'm currently balancing things out, adding sections and shortening certain parts of the text until I am able to beat the game without respawning once. I'll upload the changes once the voting is done and I'd love for you to give the game a second try!