Lost in the FrostView game page

Lost in the Frost is a platforming shooter set in a drab 2-color world.
Submitted by MountainsideGames (@STORMFATH3) — 43 minutes, 14 seconds before the deadline
Add to collection 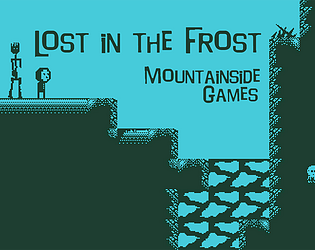 Lost in the Frost's itch.io page

Cookies eaten
Gave google a run for the money.

The gameplay was really smooth and juicy for a while but the framerate was mostly between 20-25 for me. The gunshots were punchy, and the music was lovely but a bit too quiet. And lastly, the way the crosshair blends between light and dark backgrounds is such an elegant use of the limitation.

I knew someone would love that reticle, thanks for playing!

Solid effort. I have one tip, though. The camera follow speed was just a tad too slow so times when you jumped down a good distance you couldn't see where you were going to land.

i plan to fix this in the soul sequel, thanks for playing and the feedback!

Everything just kinda falls in place and works, the art is good, controls tight and with a cool atmosphere.

The only thing that kinda caught me off guard is the low framerate, but im unsure if that is just how the game was made or something off with my computer.

Thanks for letting me know, you are the first one to have framerate issues but, I knew they were a possibility. It was a pretty messy endeavor. I will make the next game much more efficient. PM me on here or discord if you are willing to give my next alpha a go. It will be similar and I would love to know it will run nicely on your machine! :)

O yea sure, just upload it on itch, ill follow you so i get notified.

enemies don't really do anything and you can just jump over most of them. you could give them some attacks, like maybe they could do a charge up melee swing at you or something.

ice was a cool addition but again didn't really change how the game played much, if you replaced the ice with normal blocks the game would practically be the same.

camera is good for the most part, but it feels too slow when falling. maybe bump up the camera lerp speed if you're falling from a platform, so you don't fall onto an enemy or spike.

would be nice to have a particle effect when you double jump.

you can't aim behind you, not sure if this is intentional but it's a little annoying. you have to actually turn your character around first.

the combat feels so good, even though you could just avoid most enemies i still found myself killing them because it just feels really good.

audio was good and the art is pretty charming.

the gun shooting effects are all top notch.

overall, i enjoyed it and there's some potential here.

Thanks for playing, and the detailed feedback that's always really helpful. :)

Seemed very polished. Loved the music and the aesthetic. I feel like some parts of the level were meant to be secret/special item locations but never found anything.

The ice felt awesome and I couldn't help but think it might be a fun interaction to have gun shots push you back a bit when on ice.

Duuuude, I totally thought about the shots giving you enough knockback to scoot on the ice but, didn't have time to implement it. I will be adding collectable items to the soul sequel! Thanks for playing and the feedback:)

Loved it. Seems like a first level of a proper game rather than something that was made in 3 days.

Thanks alot, I'm thinking of making a proper game of it :)

Really loved it . You should try to make this a full release. Great artwork, responsive player movement, soundtrack fits nicely with the game. I am surprised that people can pull this off for a game jam. Enjoyed playing it  a lot.

I was thinking of using a four color pallet and making something a little longer, Thanks for Playing!