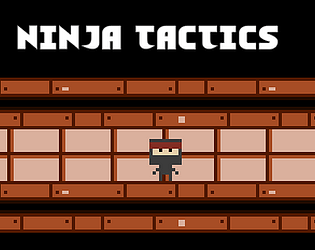 Kinda reminds me of an old cell-phone java game with mansion and stuff.

A pretty solid game. Really liked the movement implementation and menu with episode choosing is really cool. Although I have couple complaints. Firstly,  guards that cast rays from outside of your view make the game really anoying at times, that feels "unfair". Secondly, the possibility space is very big (Generaly speaking maps and the paths of guards) so that the general feeling of the game is less puzzly and more do the thing that just seems right. Maybe it was the general idea all along.

Anyway, thanks for the game!

Solid presentation and gameplay. I enjoy that you have more ideas for further episodes. Would definitely like to play more.

Turn based stealth! Sign me up! was really good can see this being a mobile game. Maybe I would suggest adding range to their sight.. otherwise it was awesome I love playing it!

Pretty cool! It was a bit confusing because the turn based movement was a little confusing. Over all though, I liked the puzzles, and I had a good time with it.

Really cool game, took a little while to figure out that it was turned based cause the turns are sort of simultaneous.  Loved the music, some sound effects would have been nice.