A game where you travel through other game worlds because is too hard make a remarkable universe and conquer the public.
Submitted by Akira Robert (@akirarobert) — 1 hour, 16 minutes before the deadline
Add to collection 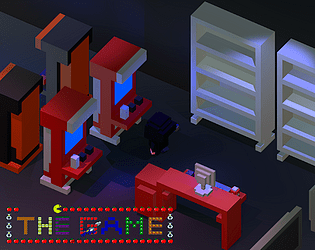 How is your game meta (within each relevant category)?
The proposal is that Play The Game be a game about easter eggs, jokes and wall breaking.

Originally we've designed puzzles involving an external interaction (QA Analyst character, that are the player), using QR Codes that need to be scanned to get some useful information to progress in game. Unfortunately, I don't have much free time, therefore, the current game experience only provides simple situations where the player must abduct objects from the scenario and use it in their favor, as well as using glitches.

Play The game will continue to be under development, all nine generations will be available soon, as well as weapons and items that have been developed but are not in the game (mostly) due to lack of time for testing.


About Play The Game:
A game where you travel through other game worlds because is too hard to make a remarkable universe and conquer the public.

You control Voxel Subsurface Scattering, an archaeologist from another dimension who wants to collect artifacts and through these unveil a great mystery that haunts the world of pixels: The mystery around 9th generation.

Mr. Voxel will venture through console generations, solving puzzles, facing iconic enemies, and collecting artifacts that will be analyzed by his partner, QA Analyst, to find out together the whereabouts of the 9th generation, the lost generation.

Please list any pre-made art/music/other assets that you used.
I've used a premade script (made my own), simply a Projectile Weapon System.

After my new Inventory System become buggy, I've made a new one with some stuff from Rogue Craft Inventory Tutorial Part 1 (http://rogue-craft.com/slot-based-inventory-in-unity-and-unet/), because fix my first one it would take much longer.

Anything you want to say to players before they play?
Controls:

Movement - Arrows / WAS
Sneak - S / Arrow Down
Run - Left Shift
Jump - Spacebar
Interaction - E
Abduct item with Switch - Press F near an object or enemy.
Inventory - Press Tab to show or hide.
Click at item slot to use the item.

Play and be surprised by this mega bugged experience.

This game will continue in development, features like QR Code interaction and puzzles that involve the external environment are planned.

OK, I finally uploaded a video of my playthrough, it can be found here:

physics are... interesting, but it's difficult to figure out how to do anything (except walk through walls and fly, those are easy). Will be interesting to see where this goes, as graphics and audio are quite good.

I'm having a little trouble playing this game; when I interact with the Switch, the camera changes but I can no longer move around. Perhaps I am doing something wrong?

Ok! After reading the previous comment I was able to get into a few worlds.  Overall, I think your scope was JUST a tad too big for the jam.  Maybe just making and completely polishing one "generations" would have been a nice prototype for the game overall.  If you update, I'd definitely give it another shot!

Thank you for your words of encouragement. I know the scope of the game is too ambitious for a Game Jam, but I really needed a push to start something, and I thought that Game Jam was perfect for that, hehehe. I intend gradually to update and polish the Game Jam version, facing as a prototype. After that who knows... maybe a refactoring looking a real release ;)

No idea how to progress. Picked up a Switch, but nothing else seems interactive. Screenshots indicate there's a lot more content here, but how any of it is accessed is a complete mystery.

Don't feel that I can accurately rate this, as a result.

Unfortunately I had to release the game without finish or polishing it. I will release an update fixing some issues and adding more content soon as possible.

After pick up the Switch do you need to interact with computer, select a Generation, after that go to the Portal and Press E to teleport.