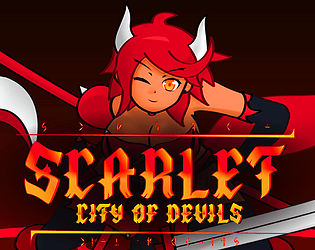 How does your game fit the Magical Girl genre?
Scarlet is half demon magical protector of the Red Fortress District.

Which theme(s) do you pick?
[Embodiment] of [Scarlet] [Devil]

How does your game fit the themes above?
A city of devils were one half devil name Scarlet will defeat them all.

all of it were made during the jam period

they were created from before the jam or purchased

This game is awesome. The art is great, every character design is really cool, the animations are well done and varied, and the gameplay is super satisfying. I love it a lot, which is why I'm going to get really nitpicky.

-The combat system incentivizes the player to play reactively rather than proactively. Once the flame is unlocked, there's no real reason to engage with the melee combat outside of bosses because the optimal strategy becomes to dodge the enemy's first attack then use the fire to instantly kill them. I think if the dodge/instant kill mechanic was slightly less powerful/easy to execute and the enemies slightly more vulnerable to normal attacks, the combat system would be elevated to much greater heights as it would feel more well-rounded, and an instant kill would feel more deserved.

-In bosses, it seems literally impossible to get a hit in without landing a dodge, which seems to be intended, seeing as how the bosses appear to be designed to make it as difficult as possible to dodge them successfully. It was kind of funny; by the time I got to the final boss, I found it so much easier than the others because of how fairly she telegraphed her attacks. I got incredibly frustrated with Rudy because of her nigh unreactable attacks, but it felt like she was meant to be that way. The only frustrating part of the bosses that I encountered that DIDN'T seem to be intended however were the attacks that involved the boss leaping into the air and slamming down. It was never clear what exactly the timing was for dodging those attacks. I would generally try to dodge right as they touched ground but it was usually wrong, and the flashes didn't seem to help with those. I'm not sure where I'm going with this paragraph, I'm just documenting my thoughts and frustration points.

-The heavy attack seemed impractical outside of use in chain attacks and for the ground slam, as it didn't seem to do more damage than the light attack.

-Grinding money for the moveset upgrades seemed a bit of padding. I didn't hate it, but it hurt the pacing and I imagine it would be even worse for a  player that died and lost their money.

-Somewhat connected to the instant kill mechanic, but I never really felt that getting healing from food or bath was ever necessary.

Anyway, nitpicks done for now. Don't let them distract from the fact that I think you have an amazing game here, and knowing that it's just the foundation for a bigger project makes me very excited to see what you'll do next!

Actually all this info is great! I want to smooth out as much a possible and info of the tiny detail helps.

This is a really well-made and charming game! Love the quality-of-life features many jams neglect like a makeshift tutorial with the notes, intro cutscene, and pause menu. The dark souls roll is something I've never seen translated into 2D and I think you did a great job at making it purposeful and fun. I also really like the consistent theme+tone, sprites, animations. The UI could use some work to look more thematic.

My only complaint is minor and it's that I feel the boss with the knives has unfair hitboxes. When I'm standing at the center of him I'm still able to get hit with his knives despite his knives appearing way over to his sides. I can feel a lot of Dark Souls inspiration and I like the difficulty in general, but that's something I thought was a bit unfair.

One of the more polished game graphic wise I think. The art is so cute I like it so much.

The difficulty... is definitely way too difficult for my taste. First I got stuck at the two big guys, then I faced the boss and I said enough. Here I thought Hollow Knight was hellish XP

Perhaps with some grinding I could purchase some of the equipments I happened to see up there but nah; for now at least I think I will just stop here XP

Thx. Going to do a lot of readjustments to make it smoother for the full version. Lot of the focus was sculpting out the foundation to see how the game would take shape.

My thoughts while playing the game (+ means I liked it; - means I didn't):

+ Good music
- Intro text: I don't like that it auto-advances. I didn't get to read the whole intro because the text disappeared too fast.
- Some of the yellow text gets lost becuase some of the background is the same color. Text needs an outline, maybe a distinct color from background or an underlay.
- Control instructions should be placed right at the start. I know it's pretty close right now, but it needs to be before the player can do anything in case they are clueless.
+ I do like that there are hints at the bottom of the screen that tell you when you can interact
- Enemies should stop moving when you're reading.
- Chat boxes need an indicator of some sort to let the player know how to advance the text.
- You get stuck on some stairs. At least it's possible to go up or jump.

I didn't have trouble with the attacks, but the momentum movement was kinda offputting. I would have liked more instant stop-start movement. Dropping your money on death and having to get it back before the next death made me think of Dark Souls - this game is similiarly difficult, so I'm guessing that was an inspiration. I kept dying at the Iron Pot. This may be my own fault - I did ignore the warnings that said "you will die here" - but I would have liked a little more direction regarding what I should do instead.

It's definitely a good start. I think the instructions need to be shifted around just a little bit so it's more intuitive, but it's overall a good game if you're looking for a challenging platformer.

My first impression was "wow, this really looks a lot like Birth By Magic". Considering how good that game was that is absolutely not a bad thing. Taking what worked in that game and evolving it was an excellent decision here.

I thought the choice of music was a bit odd at first, but as I played and got a better feel for the setting and tone of the game it started to fit better. I really like the premise, a kind of retro-ish Demonpunk setting. The art is top-notch and the graphical style is very nice, I think I like it even more than Birth By Magic.

I'm not a fan of the map layout, I'd definitely prefer a hub and spokes to a maze with stores scattered everywhere. That being said I understand that it's pretty much par for the course in the subgenre you're going for so I don't really consider it a problem.

I didn't get lost in the time I played but a map might be in order for the full game.

Even the demo is huge. I don't expect to get very far to be honest; I'm kinda eh on metroidvania in general and I'm not very good at this game so I'll probably just keep dying. But it is a crazy long game full of content.

The only thing I really found offputting was how harsh dying in a boss fight is. Losing all your money when you die and having to get it back didn't seem too bad in the overworld, but you're most likely (or at least I'm most likely) to die during a boss fight. And when you go back it's win or lose the money for good...

I found the combat quite difficult and pretty much resorted to spamming the light attack because I could never get the power attack timed right. That being said I struggled a lot with Birth By Magic as well so this is more just me.

Between the scope and the polish of this game I'm still kind of scratching my head at how you managed this. I don't know if it's my personal favourite- again, I'm just not a fan of this subgenre in general- but I would definitely call it one of the best games in the jam.

Submitted
In The Middle Of The Night
LikeReply
ShademareDeveloper2 years ago

Thank you very much! It was draining by the end of the jam but I do wish to continue to make this game a full fill game. I defintally agree with adding in a map feature that she can get in the game. I am trying to tight up the combat so that the heavy attack is a more viable option. Thanks for playing!

Wow! First off, this game has TON of content! I'm really impressed with how much you got done in the jam period. The graphics are great, I really really love the little animations when you sit on the couch, eat, etc. The setting has a cool atmosphere that all feels tied together!

Collecting upgrades is always nice, though I didn't feel much stronger even after 3 horns were collected.

I only have a few nitpicks... the platforming felt a little off. I would constantly miss jumps or have trouble getting up ledges. I'd also get stuck on little lips of ground occasionally... a minor annoyance sometimes, but death if you are being chased! My last nitpick is just me, but I found it quite hard! I know it's Darksouls inspired, but having never played those I don't have a huge frame of reference. I found the red knight enemies harder than the first full boss bounty!

All and all, this is a really amazing game! I still have a lot of other entries to play, but I imagine this will be among the best. Awesome work!!

Thank you. Going to make sure to get those little lips on the ground and give the jump more improvement. The combat will be a bit tighten and hopefully the combat will go smoother and easier player in to the difficulty.

Oh and if you thought the red knight are bad. Def watch out for the Yellow Knights they got pikes! 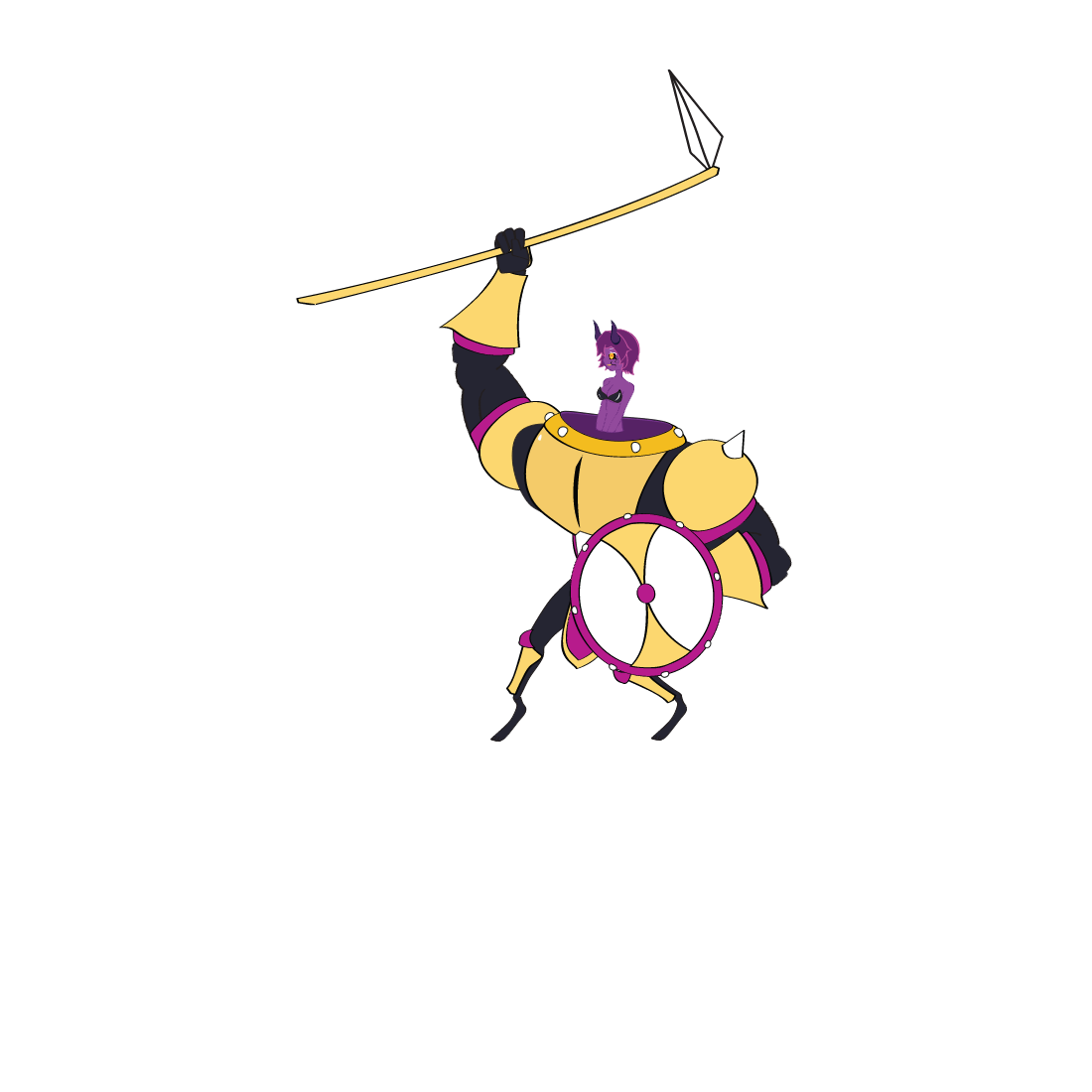 I'll have to go back and finish this when I've got some time!!

Cool! Take your time with this one tho. It may be a demo but there a lot to do. 3 bosses and a hidden hard boss too~