Two harcore platformers merged into one. What could go wrong!
Submitted by rubr (@therubr) — 7 hours, 14 minutes before the deadline
Add to collection 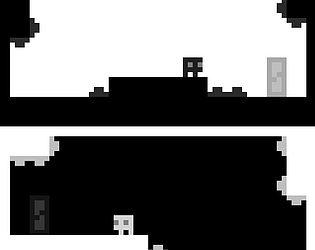 Challenging game! I included it in my LowRezJam compilation, if you’d like to take a look :)

It's an interesting idea that's presented quite well, though I'm not sure it fully works. At the very least the difficulty could be toned down a lot - what's trivial as one character becomes incredibly difficult when you add a second. The visual style is quite nice and provides a nice contrast between the two versions of the level, though some sound would be good.

Thank you for your feedback! Im currently working on sounds and im thinking to implement that you can switch witch character youre controling directly as suggested below.

This was a difficult one, but for the most part I thought it was fair! My only complaint is the wall jumping didn't feel intuitive. Maybe if the wall jumping was triggered more explicitly, like you have to be pressing a direction into the wall to be in the "can wall jump" state.

Concept was really cool. Definitely would like to see this explored further! Great job!

Thank you for the feedback! Yeah, Ill admit that I never made the walls jumps "feel" right, but I have a few ideas I might do.

neat idea and execution. I like games with this type of minimalist art style, but the player movement made the game hard

Thanks for your feedback! Could you suggest something to make the movement better?

I do quite like the idea and the style direction but sadly the controls and collisions are pretty unforgiving.

I thought Parallels was all right.

A simple concept for a puzzle platformer that I might want to see again in a future installment, but as it is now, I found it too difficult. Movement is very fast and tight, which normally would be great, but when I you're contolling two characters at once, it feels like I don't have enough time to glance over at what the other one is doing.

Most of my complaints could be fixed with the addition of sound/music, and perhaps a button to switch the focus of your character so that the bottom avatar's controls become uninverted for when I need to focus on what they're doing. and vice versa. In my short time with it, I just never got used to that.