Submitted by JackOatley (@f_oatley) — 3 hours, 34 minutes before the deadline
Add to collection 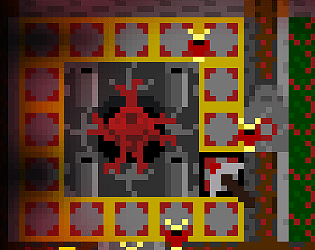 Did you work in a team?
I worked mostly alone though I had a friend help a little bit with the music.

Was the resolution a challenge?
Not too bad, I think I settled on my style early. But because it's unfinished not all the hurdles were presented!

What did you learn?
I really need to learn to just make simple concept games, that scale quickly. I have a tendency to do the opposite, to make games that require a lot of content to make their basic premise/concept work. And I don't always have the time to make so much content as I think I do beforehand. Eventually this'll sink in. :)

Looks promising! and the graphics for the resolution looks pretty well. Maybe in a future version you can reach to 128px or something like that. Congrats for the prototype !

This looks like the beginning of a pretty fun game. The controls are easy and the art conveys a lot of detail without being too noisy.  I love the dark atmosphere too. Nicely done!

Even though it's unfinished, the game immediately felt familiar when playing it. You nailed it with the Dungeon Keeper vibe! I actually feel like booting up the game now haha

This is cool. Nice style, Dungeon Keeper-esque. Definitely potenial to expand upon. Didn't look like you struggled too much with the restriction. *thumbs up* :)

Well done. Reminds me of Dungeon Keeper, which is still one of my favorite games. I´ve always wanted to make a similar game as DK using either Fusion or Unity. This kind of pathfinding isn’t easy to do, so it’s still just my dream. Great that you decided to share the source code. -oneak

Really cool. I love the aesthetic and I was impressed by how much personality you fit in with so few pixels. I'd love to see what it looks like if you get around to finishing it. Dungeon Keeper was such a cool game that I always like to see others take a crack at it.

Submitted
What a Card!
LikeReply