Submitted by Insane Scatterbrain (@InScatterbrain) — 1 hour, 51 minutes before the deadline
Add to collection 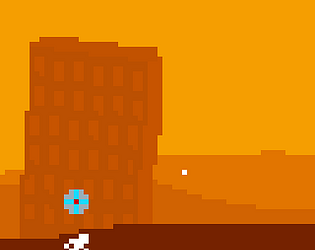 It took me several attempts to figure out the character was jumping, mostly because he doesn't move up any during the jump. Because of that I gave the game a rather low score on the graphics. I don't think the game looks bad, by any means, but when a control feedback to the player isn't immediately clear I have to consider that a failure in visual clarity.

Once I learned  that I was actually jumping, I picked up the game pretty quickly, but didn't make it to far into it before I lost interest. It's not a bad game, but I personally don't find timed based jumpers to be fun. But for the sake of objectivity, I think people who are into timed based jumpers would enjoy this kind of game. However, I'm not sure how rhythm plays into this game, which I assumed it would given the title.

The music was okay, I only heard the one track so i'm not sure if it changes the more you play or not.

Also, the opening of the game has some typing in text, and it goes off the screen until it finishes its cut scene. Not sure if that's intentional.

Overall, I think it's a nice game.

Thanks for your extensive feedback!


I'm sorry you had issues with jumping. I'm not really sure what you mean by the character not moving when he's jumping though. The character should move up a little and the sprite should change from the running animation to a jumping position. It's not really clear to me if it's not working right for you for some reason (is it a bug?) or if it's not pronounced enough?

To explain the rhythm part of the game: the mines are placed so that you have to jump to the beat (although you could probably do that on vision alone, as I tried to not make that too unforgiving). Also, (not sure how far you got, but) if you go a little further into the level, enemy drones start moving into screen that you have to aim at, at the right time  so they will be shot down in sync with the music.

The music does change a bit, some synth arpeggios come in a bit later, and melody after that. But I'm no musician so I had to keep it simple. ;)

Do you mean the text only becomes legible once all of it is typed? If so, that's a bug, because that doesn't happen for me. :(

I really like the graphics and music but I wish the gameplay didn't include shooting and was instead about jumping, sliding under obstacles  (held notes that are longer) and stopping to avoid falling debris or something (short pauses in music). As mrmatt said, it's pretty dang difficult to be looking both at the ground and aim your mouse at the same time, especially at the scale we're talking here. Or maybe I just suck at these kinds of things (I do).

If you get a chance, please check out my entry.

I don't think it's because you suck. ;) In hindsight I think it may be a bit of a mistake. My thought process was that since it's rhythm-based you won't need to look at the ground all the time, but that turns out to be pretty unintuitive. So I think you're right, I should probably not use both those mechanics at the same time.

I don't know if it's just a client side problem, but for me, the game actually started with 64x64 pixels(really small). The gameplay was challenging but good, with everything feeling nice and tied-together. The art and music is also great. If you work on this post-jam, it can turn out to be quite a good rythmic shooter especially on mobile phones.

Oh, that's weird! It should open upscaled to a resolution of 384x384. Not really sure what's going on there. :(

I'll look into that if get the chance. Thanks for your feedback!

Gameplay is functional but is a bit difficult - it can be hard to both jump over mines and aim the mouse at the same time.  I do like that jumping and shooting is tied to the music's rhythm.  Aiming seems like it needs to be precisely on the target to work - maybe increase the size of the crosshair a bit?  Aside from that, graphics look nice and make good use of the 64x64 space.  I really dig the colors in the background.  The music is pretty good too!

Yeah, I can imagine the controls not feeling very intuitive. I should've probably picked one of the mechanics and stuck with that. :)

I tried a bigger crosshair, but felt it took too much screen space, but I should maybe reevaluate that. ;)