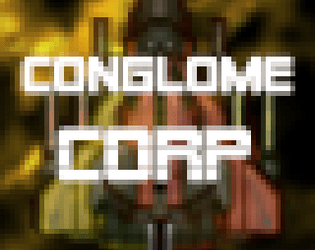 A good concept here, I think. I would agree with other commenters, though; it really suffers from the 64px limitation. I've seen the screen essentially be dissolved into what looks like a random collection of pixels and I've got no clue what's going on; this is essentially because the graphics are, I think, at higher resolution inside the game engine and are being rendered and dithered down to fit 64px. A more standard game resolution would likely help a lot with this. I'm also not sure about the overall feel; the ship moves, explicitly, rather slowly (with a "turbo boost" button which speeds it up) and that rather implies that the overall approach is that you pilot slowly, take your time, consider each shot, move gradually and thoughtfully into place, attack from ambush stealth kind of thing. But the first real tutorial is a fast-moving laser space battle between ships, which would much better fit a quick-moving, react-on-instinct, blast-everything twitch style of gameplay. So I don't know how I'm meant to be playing, which makes me confused. I was also a bit taken aback by having to use a whole bunch of keys to do different things; again, that's something more suited to a thoughtful slow style of play, which is at odds with the laser battle I'm made to participate in. There's some good things here (in particular, I think the graphics would look pretty good if they weren't harmed by being rendered at such a low resolution, and the acceleration audio is evocative and let me know exactly how fast my ship was going), so it will be interesting to see what happens when development continues.

I enjoyed what this game has to offer, especially since you will be working further to develop it post-jam. The controls are nice, not too sensitive. I like the sound effects very much. The ship itself doesn't look like a sprite designed for a 64x64 game, and when zoomed out didn't really look like a ship at all. So maybe, this hindered the experience slightly. Still, I enjoyed it, well done.

Seems like it has a ton of potential, but as it stands I had problems. It definitely seemed like the game was made to be a lot larger than 64x64 and was compressed down, with a lot of effects like missile trails being anywhere from thick, visible lines to near invisible occasional dots and the ship itself being very flickery, even when zoomed in. I played for several minutes and didn't find a single enemy, which hampered my experience - actually flew from end to end of the "universe" and only found one large ship other than the one you start near, which seemed to neither react to me firing repeatedly at it, nor fire back itself. I'm guessing there is combat in the game from the screenshots, but I couldn't locate it.

I'd love to see how this turned out with extra content added, some helpful additions like an enemy tracker etc, and probably most importantly, a resolution upscaling.

If it helps at all, the game starts you off with a basic tutorial mission, then it leads you to our first set of missions with a race called the Lotl's. However your issues with the game definitely do point to some major flaws since you were able to skip right past them, fly around, and get bored.

I also agree that we probably reached for a bit to much with the resolution being locked at 64x64, however the good news is that the game jam made for an interesting idea / story line and we are going to be working on a non 64x64 second game that dives deeper into the world we made.

Thanks for giving it a try.

This was a really fun project, and it was my second unity game I have ever developed. The 64x64 resolution definitely was a challenge to get around, and as someone with less than 2 months experience programming I am definitely happy with how the game turned out.

The small team we put together is looking forward to future projects, and we will most likely be making a second version of Conglomecorp that isn't limited to a small resolution, and will have more depth to the RPG side of the game.

Thanks and good luck to everyone who entered.