Eat up those asteroids to swallow the sun!
Submitted by austinkinghill
Add to collection 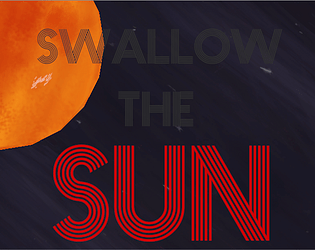 What INSPIRED this game?
This game was inspired by photos taken by NASA

Maybe add a counter for how many asteroids you have swollen and a pointer to where the sun is.

Has a lot of potential, I love the concept and the mechanics, just the lack of sound and view-port size(as has been mentions). Very original though as far as I'm concerned :)

Thanks for playing and commenting! Yeah I have some sounds and music to put in, but they didn't quite make it in before the deadline.

Before I start: I will try to give you some advice on which parts of the game could be better, because I think, that this is why some people have joined the JimJam. I do not want to pull you down or something, I will just try to point out some things in detail, you could do better, so that you know where you might have some trouble. Even if I sound rough, I do not mean it so. Ok? Good! Now let's start!

Well, it is a simple game by concept. It is kinda nice, but it suffers from some problems:

At first: The camera. The camera has alwasy it center above the player. This is problematic if the player want to navigate downwarts. Centralise the camera on the player, for better visability or move it in the direction of the player movement. Also consider to make a minimap, a larger view or at least an indicator, where the sun is, so that the player has something to orientate. It is just a mess to move around without knowing, where you are.

The game is a nice litte arcade game, which suffers from the lack of development time I guess. I actually like it, that the player is slower as the asteorids, so that he has to outmaneuver them, to catch them. Keep it up, buddy!

Yes! I totally agree with you on all three. All things I'll probably change and reupload, so the game is more fun and less frustrating. Thanks for the clear and detailed feedback!

Was pretty fun and challenging. Only problem was I would get lost in space and never be able to find the sun or any asteroids. Maybe a mini map or some kind of gravitational pull (to the sun) would be helpful. Nice job though!

Thanks for playing! I definitely wanted to include a mini map, but wasn't able to implement it by the deadline. I appreciate the feedback!

View port needs to lead the character, can only see were you are going very well when going up on the screen.

Thanks for the feedback! I can't believe I didn't notice something so obvious. I'll definitely tweak the camera soon.

The web player doesn't seem to work properly for me on Chrome. The screen cuts off the word "swallow" on top, and I don't see any Unity controls for full screen or anything like that. I've been playing plenty of other Unity web player games, and they all work fine on multiple browsers.

Thanks for the feedback! I needed to change the viewport size. The game is much more playable now.