Get the ring and GTFO
Submitted by Diligent Games (@DiligentGames) — 16 minutes, 36 seconds before the deadline
Add to collection 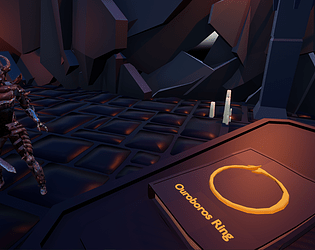 Good luck with the polish and release!

I had a bit of an issue with this game, the zombies are way too quick, they just attack you relentlessly (I think one continued to hurt me after it died also), so i kill the first guy, run up the next passage and get instantly killed by the 2 zombies that are up there, even though I had full health engaging with them, so the game need a fair bit of balancing.  It would also be nice to have some sound fx in there, and some kind of feedback when you are getting his as I didn't really know. Graphics were really pretty and the controls felt solid though. Not a bad effort.

Thank you for playing! We have improved the hit registration and the damage values for the enemy. The game is a lot more fun now! We did not have enough time to add sound effects, but be sure we will add them in the near future! I will also add the glitch you talked about to the task list.

Awesome to hear! Would be nice to see a future version of this :)

We are planning on finishing this game and releasing it to stores!

Things I learned about myself: My curse has an addiction to standing on lava, I can attack those who stand behind me, and I love cake. 10/10. Side note: The idle music is beautiful.

Thanks for the awesome comment! Our music artist appreciates your comment and sends you a happy face :D The attack from behind will be fixed very soon! Thank You for playing!

Very impressive use of Unreal Engine in such a short time. Graphics and core game mechanic were great and on-theme. I found it difficult however, as the enemies attack very quickly, and health drops fast. I can't kite (run backwards and attack). Some feedback when hitting enemies would be nice too. Great game with style!

Added your issues to the task list! Thanks for playing!