A nod to the classic game DOOM & Wolfenstein3D with modern wave elements
Submitted by BlakeGillman — 4 hours, 48 minutes before the deadline
Add to collection 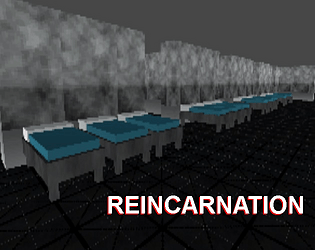 this game was seriously fun xD

I love the old skool shooter vibe you have going on with this and how you even forced the resolution to be low so it added to the experience, really took me back! I even crapped myself when one of the dudes was stood around the corner lol.  My only real criticism is that the walking feels like it should be faster, it was like walking in tar, it might have also given me more chance to survive against the enemies too.   Really cool effort, good job!

Really enjoyed it, the walking sound is on point. Never played Doom or Wolfenstien, So i don't know anything about that aspect of the game : )

Played a few runs of it, didn't get very far in any of them I think my highest score was 2000. The art style is amazing and makes for an interesting experience. My biggest problem with the game was I never found any weapons other than the pistol, and with that killing the larger zombies is abysmally slow. I don't know if I was doing something wrong with my exploration, but I found a hell of a lot of closed off doorways and passages so it wasn't like I was just waiting at the start of the level. Definitely reminds me of a hybrid of classic fps and COD's zombie mode so that's pretty good!

I haven't played Doom or Wolfenstein so I can't comment on how well you've recreated those experiences.

- The atmosphere is on point due to the audio and the dark fog that hides distant objects. You have a run option but there doesn't appear to be any real reason to walk so I would have the player use a single speed.

- It took me a while to figure out how to switch weapons; I tried mouse scroll, Q/R keys and eventually found that you need the number keys. I think having multiple controls that do similar things is a good way to help the player figure out the controls which is especially important for keyboards.

- What killed me in the end was multiple enemies hitting me all at the same time. It would be good if there was an invulnerability period after taking a hit and a speed boost to gain some distance. This suggestion has two uses; as feedback for taking a hit which is something you could have improved here, and giving the player more opportunities to learn from their mistakes.

This game is seriously freaking me out! Zombies spawned out of nowhere, coming at me quite fast and with quite a lot of HP, and the 3D sound effects just make it a lot more realistic. It really had me on edge like I am in there with a bunch of zombies. I didnt quite get the theme in here but it was fun overall, in a sense that I know I was getting better at it. Local highscore is a nice touch, I got ~1500 in my 3rd run. Great work!

Very nostalgic to play this game. Running backwards faster than I could run forwards felt strange. The atmosphere was great however, just some meatier sounds would have done this a world of good. I also got trapped in a corner by an npc, would be nice to be able to free myself.

There was some fun.  I even played it a few times.