Guide a blind damsel to safety!
Submitted by Caotic Pixel Studio — 1 day, 12 hours before the deadline
Add to collection 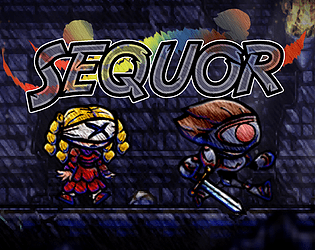 So...what exactly is the player supposed to do when the tutorials says "sometimes she has to wait..."? Both waiting and following have the same result.

Hi there! The tutorial says "press A to make her wait" (she will stop walking), and "press A again to make her follow you" (she will follow you again).  Just make her wait, then head on without her. Stepping on the first switch will make a monster drop near the entrance, so you just have to figure out a way to make her follow you as soon you step on the switch. That way you're both already moving and she won't be reached and attacked by the monster behind her. Of course, the extra challenge there will be the ramming obstacles; but then solving puzzles and going through obstacles  is the  point of the game now, isn't it? ;)

I'm sorry if you're already having a hard time in the tutorial; but good luck! :)

I got all that. I was just citing the tutorial text to indicate what area I was referring to. The reason I asked was to make the point that following your instructions results in failure. That's really bad design for a tutorial, and is only made worse by the placement of the text. If the player listens to the instructions immediately on reaching them, the client will be off the screen when attacked.

Ah, okay then! Noted. You see, the "sometimes she may need to wait" was some sort of "precursor" to the actual tutorial texts (in this case, the "press A to make her wait ,etc"). By that i mean i didn't expect people to take that specific text literally. In the previous room, i added texts like these as well (for example, "while some could be a trap" then followed by the actual tutorial text "press Z to attack". All in all, any of the texts in the tutorial rooms that aren't specifically commanding you to press any keys are just there as hints and it's for the player  to decide what to do with those texts.

But thank you, thank you very much for the feedback, Colin! It will really help me improve the game. I'll take that into account the next time i work on this game. :)

This game reminds me so much of the blind prince and the liar princess https://m.youtube.com/watch?v=iOzW1INWIb0 Not sure if that’s where you got the idea from or not

Oh wow i didn't know that a game like that exists -- too bad  there were no actual gameplay footage in there. >_<

I actually got the idea from Resident Evil 4 -- specifically, those parts wherein Leon is escorting the president's daughter. Don't know if you're familiar with the game,though.

Huh. I like the premise of this. I'll definitely give it a go sometime.