Run a prison... for animals!
Submitted by seaphoenix (@SeaPhoenixGames) — 9 hours, 50 minutes before the deadline
Add to collection 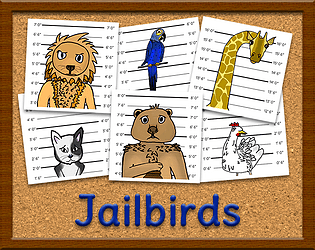 I played the game and I really liked it :)

Thanks for playing and glad you liked it!

Did a write-up on this game! When I was going in I didn't realize that you also made the Rock and the Rose, so congrats on getting second place last year on that!

Thanks for playing and for the insightful review! The game is meant to be light-hearted; although I do try to weave in issues such as lobbying, monopolies, changing the law rather than changing the individual, being arrested for petty things that might not ordinarily be viewed as crimes, etc, I didn't want the game to be a heavy-handed experience in these topics.

From a social point of view, rehabilitation is one of the many goals of imprisonment (probably the most idealistic one, with the other goals being punishment, deterrence, and incapacitation), and so this game takes the optimistic route. I guess it's also a traditional role-playing game in the sense that your quests are to help the NPCs in some manner. :)

Sorry to hear that you had a glitch with the fonts - not sure what caused that. Just curious, was the game being played in fullscreen mode (from pressing F4)? Hopefully it's not a common problem!

I think the idea is really quirky, and I think there's a lot of charm here. I'm not entirely convinced by the execution.

This feels like a game the right person could lose months of their lives to. Anyone who loves Animal Crossing, Harvest Moon, Stardew Valley, or maybe even Monster Rancher to an extent will fall in love with this. I think my main problem is I'm not really one for those games either. Just a case of not my thing.

Graphically, there's a really nice cohesion. Everything's very vibrant and colourful. All of the assets look like they blong together. I particularly love the windowskin. Little touches like text boxes appearing by the person speaking is something I've always liked to see since my first playthrough of Final Fantasy IX. The font is a perfect match for the tone of the game while retaining legibility.

The presentation is let down by the mugshots, I'd honestly like to see them redrawn. They currently give off a vibe of 13 year old making an honest attempt to learn to draw, that might even be the case for all I know. The title screen is also crying out for a graphic designer.

Overall, while it didn't match my personal tastes, I think what you've made here is a solid foundation and I'd be interested in seeing you build upon it. Good job.

This was a lovely little  entry, but I could never be mad at a game
that lets you be nice to animals!

The gameplay loop was fun and reasonable.
As long as you take the quests seriously, you'll have a clean record and a clear conscious.
I thought I did a bang-up job and I got my happy ending on Day 8.
I don't usually play games like this but I enjoyed it!
The dialogue is cute and quirky and I rooted for the animals to not only not die,
but rehabilitate. And that they did, except for the chicken, but that can't be helped.
There's a lot of detail here for a game made in a month;
The game felt more simple than it actually is, which is a mark of good game design!

The animal mugshots were a nice touch, too. Of course, I won't get into the
dystopian implications of the detainment of sentient and (mostly) peaceful animals...

FINAL VERDICT: I'm a shining example to all animal prison wardens! :3
I hereby declare this game NOT GUILTY of first-degree manslaughter!

Thanks for taking the time to play the game and for your review! Glad you enjoyed it. I wanted the game  to be a "nice prison game" as opposed to the usual prison-type games, but I hope to add some more complex decision-making in the future (e.g., you'd like to give the prisoners what they want, but you may not be able to afford it, or it may not be in other people's/animals' best interests to do so). Thanks again!

Works fine and has good ideas.

Thanks for letting me know and glad you liked it!