Battle in an evolving boss fight and grow your characters to face the challenge.
Submitted by Swift Illusion (@Swift_Illusion) — 1 hour, 7 minutes before the deadline
Add to collection 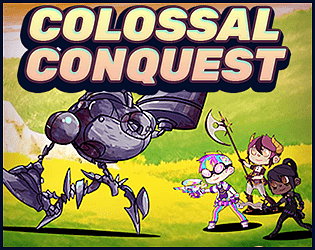 Heyho, you guys!
Love your designs, so charming :) I enjoyed your game! Have my vote

Thank you so much, happy to hear you enjoyed your time with it :)!
While I'm not a personal fan of your projects tone, the graphic/UI design is amazing and super polished from what I've seen in an LP of it, so I wish you the best of luck with your project and the larger project it was a spin off of ^^.

Yeah, it's not for everybody

Will you continue working  on CC after the contest?

^^.
Honored to hear your interest :D.
Yep, I can't push myself as much as I did during the month of the contest, but I'm still working on it as a longterm-ish project, lowering the initial learning curve and smoothing out the difficulty growth among other things, to create an easier entry point overall.
Once I have a more solid foundation/entry point I'll be releasing that and adding content/boss conquests/classes over time.
Here's a short WIP video of the class selection which is the biggest initial change :).

Nice! ;)
The IGMC was a nice start for something bigger, I have to say. Quidget 2.0 is already in the making as well.
Good luck with the game!

Thanks :)!
Yeah. It also would have been a good opportunity in your case I imagine to share a point of reference for people to look at, as you make progress on the bigger game. Gives them a sneak peak at the world/characters they can look forward to :).
Thanks a lot :D, good luck with your project and future endeavors too ^^!

I'm a sucker of a unique battle system... Instant vote from me! :)
And.. It's beautiful, it's really well made, I hope someday I can make something like this out of RPG maker..

Thank you so much :)!
Happy to hear you enjoyed your time with the game and its custom battle system ^^. Goodluck with your future endeavors :).

Just played this game and what you have is pretty interesting!

The artwork is fantastic (is that dragonbones animation?), and the combat is nicely polished with some complexity thrown into the rock-paper-scissors dynamic. The overall presentation is very professional and clean. The battles are fun, though can be a bit repetitive when the boss keeps summoning more and more bullet sponges for you to take out.

That said, there is only one actual battle, unless I missed something! There is the tutorial against the king slime and then the battle against the automaton. Not sure if an hour of gameplay can be squeezed out of this, and I am sure that you have bigger plans for the game as time goes on and more battles will be included. I am hoping that you get some sort of currency after battles that allow you to strengthen your characters' stats and such, that would go a long way towards truly getting invested in the game.

At any rate, well done and beautiful work!

I think you may have misunderstood one of the contest rules. Regarding #4
"Game Length: Judges will only be required to evaluate a game for 1 HOUR if it passes the screening stage. Any game over 1 hour  will be judged only on its first hour of gameplay."
It just means that if you developed a game that lasted longer than 1 hour, they will only judge the first hour of it. If the game plays in less than an hour that doesn't matter. For example they would be free to if they didn't defeat the boss in their first attempt try again unless it would take them past an hour of play, or if they think they've experienced enough of the game to judge it before then they won't need to play again.

Yep it uses dragonbones animation for the boss and player characters, happy to hear you liked them :) (credit to the original artwork though is http://www.akashics.moe/ for the monsters and http://woestijn.deviantart.com/ for the characters.) Glad I had time to animate the characters and that you liked that.
Happy to hear you like the twist on that mechanic ^^. Yeah, the challenge of the battle is observing the boss's actions, preparing and trying to eliminate monsters as efficiently as possible with new abilities learnt, and best removing those sponges so you can defeat the boss. Regrettably I didn't have time to add more variability into the enemies actions, I just focused on the characters and the overarching boss's stages and polishing that, thinking if interest grew with the base system there I could certainly add a new boss later with more complex minions and strategies to face.
If you'd like to try another project any time, an earlier game I designed does have more varied enemies and different overlapping systems, with a growing challenge and 'currency' you can use to not make your characters stronger but customize the layers of challenge with highscores you can gain http://i.imgur.com/hQ10GmP.png . You can find it here.

Thank you for trying out the game, I'm happy to hear you'd like to see it evolve further as a lot of the work I did was just getting everything functional, so I'd have a lot of fun just adding new content and Boss/enemy challenges to it now :).

You're probably right about the contest rules thing, it's all good :)

Overall though you definitely got a solid premise! It's the sort of game that if developed further (more content, maybe a bit more polish where necessary) it could easily be up for sale on Steam.

Honored to hear you feel that way, thank you very much :)! Glad you enjoyed your time with it.