A classic JRPG with improved battle system
Submitted by wikan — 1 day, 6 hours before the deadline
Add to collection 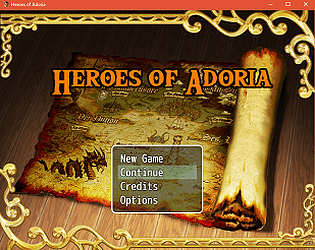 Hmm.. I just played version 0.91 but it's still pretty bugged.
After getting to the village and roaming around looking around I started to get a loading error every minute "failed to load: img/pictures/people3_8.png". The only way to make it go away was to restart again.
I loaded my last save, and I dunno if it was because of that, but it seems like the events were kind of switched around. After Hans joins me and we are to go hunt, I get a dialogue saying it's late and I need to go home. When I enter the house I got an event scene that I think was supposed to happen after Cent kills the behemoth. And then when the scene ends a new event started right away but it was the event I got when I first entered Cent's house and we saw his sister for the first time.
I was able to continue the game from there on though. I was able to get through the whole battling the behemoth and the "Unleashed Cent" events. But after Hans showed up with the head huntsman and Cent blacks out I got a black screen and nothing else. Everything is black. I can hear music and if I press esc I see the menu, but that's about it. >_<
The game does look good though. The maps look nice and the story seems good too.
I don't particularly like seeing custom facesets mixed with default ones.. but I did love the little shopkeeper girl (don't take her awayyy! haha)
What I've seen of the battle system made me really like it too. It looks a bit complex but pretty unique! I would love to play with it a bit more! :)
I hope you'll fix the bugs and upload a more stable version of the game. I would love to give it another go sometime! ^^ Good luck!

I have no idea what happened, but I ran into a fairly large bug. After the morning scene in chapter 2, I tried to go to the darkwood, but was told that 'it's getting late' and to go back to Cent's sister, which then replayed the night scene from chapter 1, then began chapter 3 and after that, replayed chapter 2's morning :S I decided not to keep playing because I think it probably would not have run correctly.

Those aren't the only errors I found, which is a huge shame because I think this game had potential. So to cover these;

Next is the writing. It needs a good proofread, there's a lot of errors. "You" doesn't need a capital letter unless it's the start of a sentence. I also feel that the writing quality varies a lot. Some scenes have a nice emotional quality, and others are very childish. I'm not a fan of having actions between colons, it looks jarring. You really shouldn't insert random japanese words like "baka" into the dialogue either. If you're writing as you go, I'd suggest actually making a script in an external program and copying it in. (You can even use plugins that can read directly from text files.) Being able to see the whole scene, and actually taking the time to think and tweak your dialogue before putting it in should help you with pacing and catching mistakes.

So for the positives, although I don't really like rpgs, I ended up enjoying my short time with this. I'm a big fan of the chance to dodge since it's an extra level of player involvement, although it seems pretty hard to time correctly. Being healed every time you guard seems like it could be abused by way of the player not needing potions if they're good enough at avoiding damage. I didn't get far enough to see how you were using TP. It's pretty uncommon to see MP taken up by a normal attack since you'd associate it with skills and or magic, but maybe you've come up with your own system.

I'd recommend making your own graphics for the HUDs, since they are quite recognisable. Hopefully there was just a timing issue with getting some of the pieces done. Mixing the rtp with custom faces is never a good idea, so you'd really need to do "all or nothing." (Sometimes you can cheat by not giving npcs faces at all, although most of the time, the extra effort will be appreciated.)

Some of these issues do seem like they'd be manageable just by spending a bit of extra time playtesting and reviewing things. Others, like improvement to the writing and mapping styles, are really just things that will come with experience. Spending some time studying other rpg maker games, picking out things you like or dislike, seeing how they've used the rtp resources etc may really be of value to you. I'd suggest crawling through this thread and its older versions, fixing up your maps as best you can, and then posting them on there to get some direct feedback.

Thank you for playing my game!

Thanks for pointing out the bug. I played it a couple of times before submitting it to make sure everything goes well. But I admit my switches and event pages are kind of a mess. I think I'll redo the whole switch management from the start. The temanco is from before I get hans's face, I must've also forgot to fix some old events. I'm sorry about that.

Also, thank you for the mapping feedback, I thought the stairs was cool, but yeah, now that I look at it it looks weird to have in town. I'll delete/fix it. Also the passability. The portal is as you've just guessed. I was playing around and thought it can be used for later events and thought it was cool to left a magic circle in front of a magic shop. But I guess it is missleading. I'll hide it.

Yes, I do need some proofreads. As for the writing I made it that way to show that cent shows different behaviour in front of his friends and in front of his sister. But I guess that also a bad idea. I'll make it more consistent.

There is a plugin to read external txt files?! I'll look into it!

Mixing the rtps does come out ugly, It'll come with more custom faces and blank npcs next.

You have no idea how much this comment means to me. I know about this gamejam halfway through it. Bought the rpgmaker, learned and tinkered with it, and made "Heroes of Adoria". Although I enjoyed every seconds making it, I have no idea how well/bad it is. After the deadline I played others works and they all so good and well made. With the lack of comments I thought it was a complete failure and giving up on it.

I'm really happy to hear that someone plays it, quite enjoys it and say that it has potential. I will continue this project!

Tp is used in the game when facing the behemoth. Cent unlock his tp skill. I'm quite proud of that battle arrangement and my bug prevent people to access it. I'll fix it ASAP.